Cable cowboy John Malone is living up to his Wild West nickname with a gunslinger's approach to the management of Liberty Global, the shrinking communications business he chairs.

Back in November 2015, its share price traded at $46 on the Nasdaq. Today, it is worth less than half that amount as Liberty has backed out of several European markets and stumbled in others.

In the meantime, its net debt hit $19.5 billion at the end of September, according to third-quarter results out today  about four times what Liberty makes each year in earnings. 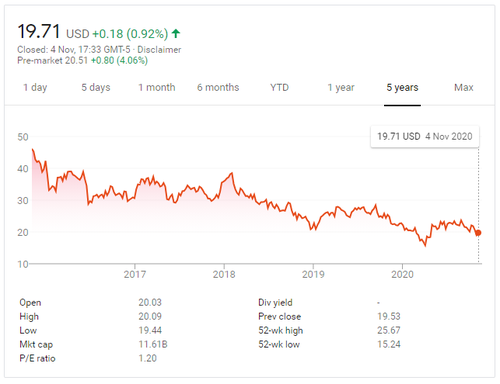 "Risky" is the word that several commentators used to describe its strategy earlier this year when it announced a £31.4 billion ($41.1 billion) merger with O2, a Telefónica-owned mobile operator in the UK, where Liberty already controls Virgin Media, its largest remaining cable asset.

That Virgin Media has become the star performer and key asset in Liberty's stable shows how low the bar is set.

In results published today it picked up 37,300 new customers during its third quarter, after losing 3,400 a year earlier. Revenues edged up 0.7% on a like-for-like basis, to about $1.67 billion. They account for roughly 57% of Liberty's total.

Virgin has been working to expand coverage and boost connection speeds, today claiming that around 6.8 million UK homes are able to receive a gigabit service. By the end of next year, it plans to make gigabit speeds available to all 15 million homes in its footprint.

This is much faster than telecom rival BT can manage on its mainly copper network. Combine that with O2's mobile service and Virgin would become a worrisome competitive prospect for the UK incumbent.

Yet a BT upgrade to full fiber will erode Virgin's speed advantage, and the cable company still has a poor reputation for customer service.

Growth in subscribers suggests that is improving, but the initial focus of a highly leveraged Virgin and O2 combo would likely be on cost cutting, brand management and any financial engineering that can slash tax payments. Investment in major infrastructure projects may not be high on the list.

Much of the rest of Liberty looks like it emerged badly from a scrap with rivals.

Its Belgian business lost 3,100 customers in the September-ending quarter, at least an improvement on the 12,600 net losses a year earlier. There were 6,300 quitters in Switzerland, as well, down from 9,200 in the same part of 2019.

Liberty must hope another planned takeover spurs a revival. In a surprise move in August, it made an offer worth 68 billion Swiss Francs ($7.5 billion) for Sunrise, a Swiss mobile operator.

As in the UK, Liberty's "convergence" rationale is that an operator needs both fixed and mobile assets to thrive. The deal is set to close imminently after being approved by Swiss regulators.

The peculiar twist is that Sunrise had previously tried to buy UPC, Liberty's Swiss business. Its efforts were scuppered by Freenet, Sunrise's biggest shareholder, which complained the whole premise was "fundamentally flawed."

UPC's cable technology is inferior to both fiber and the 5G mobile network that Sunrise is building, said Freenet in a statement of complaints in October last year.

While Liberty did manage customer growth in the markets of Poland and Slovakia, its headline sales fell 1.3%, on a like-for-like basis, to about $2.95 billion. Adjusted earnings were down 5%, to roughly $1.2 billion, and fell in every single market.

As for the debt situation, Liberty insists it is in good shape, with about 78% of its borrowings not due until 2026 or later.

But its net-debt-to-earnings ratio of 4 is staggeringly high by comparison with most European service providers. It also exceeds Liberty's $11.6 billion market capitalization by some measure.

Massive debts and stagnant earnings can make for a potentially toxic mix.