MoffettNathanson analyst Michael Nathanson has likened new direct-to-consumer streaming services from major studios and programmers as "lifeboats" to help ensure their survival amid the rough and rocky seas of a declining pay-TV industry.

With Disney+, The Mouse appears to have much more than a lifeboat, but a full fleet of cruise ships on its hands. 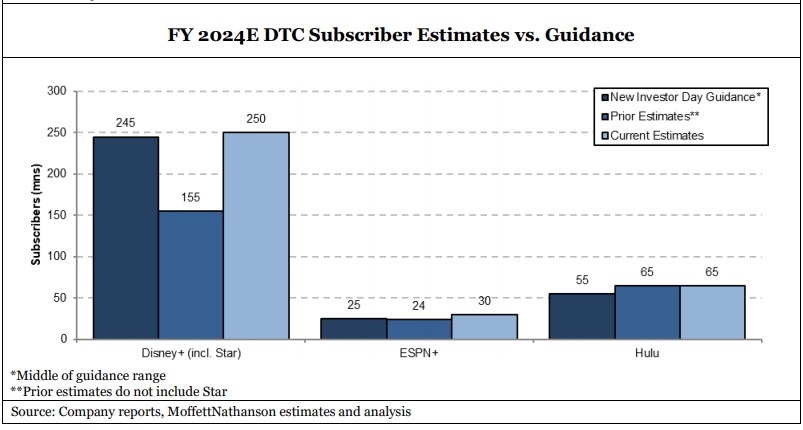 According to new guidance relayed at Disney's investor day on Thursday, Disney+ is poised to snatch up 230 million to 260 million subs by the end of fiscal year 2024. That blows by a prior fiscal year estimate from MoffettNathanson that Disney+ would get to 155 million subs by then, though that prediction did not include Star as a bundled service. Nathanson points out that Star, a general entertainment tier within Disney+ in market such as Europe and Canada that draws from content owned from the likes of ABC Studios, Fox Television FX and 20th Century Studios, will also function as a standalone service (as Star Plus) in Latin America next year, but won't be reported out as a separate direct-to-consumer service.

Disney+, which launched in November 2019, has seen its base zoom up to 86.6 million as of December 2, 2020, with 30% coming by way of a Disney+ Hotstar offering in India. Hotstar is an Indian SVoD operated by Star India, a Disney subsidiary of Disney in India. Disney+ ended fiscal Q4 with 73 million subs.

Disney also announced a massive slate of programming for the streaming service, including lots of new fare from the Star Wars and Marvel universes.

Ten Marvel series, ten Star Wars series, and 15 Disney- and Pixar-produced series and features will all debut on Disney+ in the coming years, Vijay Jayant, analyst with ISI Evercore, noted in a report following The Mouse's investor day. "In many ways tonight's event felt like the true launch of Disney+ and made it clear that the streaming pivot is still in early innings," Jayant added.

Meanwhile, ESPN+ had about 11.5 million subs and Hulu had 38.8 million (including its SVoD and Live TV service) as of December 2, extending Disney's total direct-to-consumer streaming base to approximately 137 million.

Nathanson sees Disney+ and Hulu's SVoD "closing the gap" on Netflix, at least domestically, over the next five years, with Disney+/Hulu reaching 64 million in calendar year 2025 compared to an expected 71 million for Netflix.

With Star layered in, Nathanson now sees Disney reaching 345 million total direct-to-consumer subscribers in Disney's 2024 fiscal year. He also expects company's streaming business to roughly break-even by then and head into the black in fiscal year 2025.