Comcast is in talks with Walmart to develop, distribute and promote connected TVs outfitted with software and apps developed by the cable operator, The Wall Street Journal reported.

The software involved is what Comcast is using today to power its X1 and new Flex platforms and the video platforms of a handful of other North American cable operators.

The WSJ reported that a third party would likely be needed to manufacture the TVs, with the possibility that it could result in models that carry Walmart's branding. 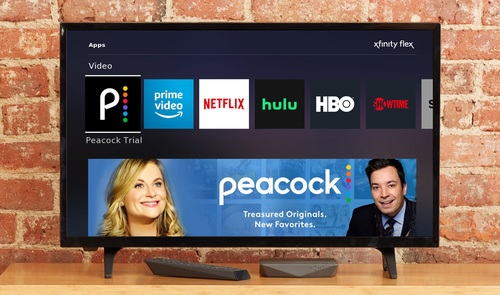 In addition to powering set-tops of its X1 syndication partners, Comcast's software is also being used to run Xfinity Flex, a streaming/smart home product that's offered for no added cost to the cable operator's broadband-only customers.
(Image source: Comcast)

Comcast, which has been signaling its intent to deploy its software on connected TVs sold at retail, is reportedly willing to give Walmart a share of recurring revenue from apps and services that run on its platform. Comcast's X1 and Flex boxes today supports an array of subscription- and ad-based Internet-delivered video services, including Netflix, Amazon Prime Video, Hulu, Pluto TV, Tubi, Comcast-owned Xumo and Peacock, NBCUniversal's new premium streaming app.

Xumo's expertise in developing native smart TV apps was one of the motivators that drove Comcast's acquisiton of Xumo earlier this year, according to industry sources familiar with the deal. Additionally, Comcast's purchase of Metrological in 2019 added key expertise for the development of app stores and the integration of apps for set-tops and other video devices.

Speaking at an investors conference in September, Comcast Chairman and CEO Brian Roberts confirmed that the company was exploring a plan to deploy its video tech stack to smart TVs across the globe.

"We're early days, but we're looking at smart TVs on a global basis, and we're wondering  can we bring our same tech stack for certain capabilities in [content] aggregation to consumers who are relying more and more on smart TVs?" he said then.

On Comcast's Q3 call in late October, Roberts also touted work that could result in the creation of a "global tech stack" that would consolidate some of the technologies developed by Comcast for X1 and for Europe by Sky. Notably, the use of Comcast's platforms to succeed in streaming is one of the "core tenets" recently outlined by Comcast (broadband and content aggregation are the other two).

The strategy would also position Comcast to take on an already crowded and competitive retail streaming platform market led by Roku, Amazon (Fire TV), Google (Android TV, Google TV) and Apple (tvOS), along with TV makers that have built their own operating systems, including Samsung (Tizen), LG Electronics (webOS) and Vizio (SmartCast).

Getting Walmart to play ball would be a coup of sorts. As the WSJ points out, Walmart already has a partnership with Roku to sell smart TVs under Walmart's "Onn" brand.

"We're constantly having conversations with current and new suppliers about innovation and new products we can bring to our customers, and we don't share details of those discussions," a Walmart official told the WSJ.