Comcast gets down to business with mobile

Without much fanfare, Comcast Business now operates a website dedicated to the new mobile offering for SMBs.

The company has likewise begun to send mailers to existing business voice and broadband customers about Comcast Business Mobile. 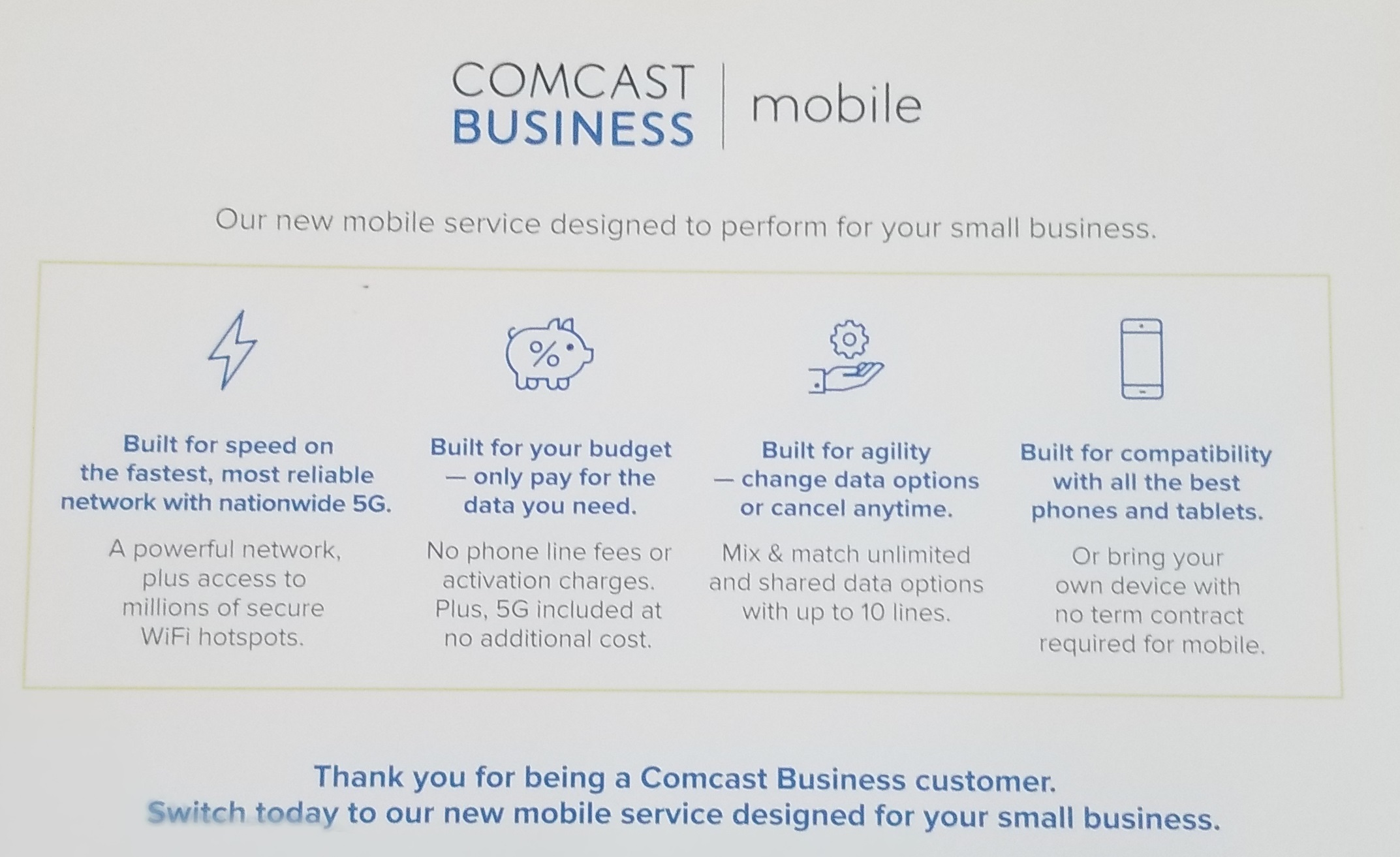 Like the Xfinity Mobile service for Comcast's residential broadband customers, the new offering for SMBs also hawks shared By the Gig and Unlimited Data options. Both options for SMBs allow up to ten lines, and the ability to mix and match those lines between By the Gig and Unlimited. Those customers can also pick from compatible smartphones and tablets or bring their own devices "with no term contract required for mobile service."

Comcast Business Mobile's By the Gig tier markets three options: 1 Gigabyte for $15 per month, 3GB for $30 per month, and 10GB for $60 per month. The Unlimited service fetches $45 per line per month, with speeds dropping to a maximum of 1.5 Mbit/s down and 750 kbit/s up after customers chew up 20 GB of data during a given month.

That pricing aligns with that of the Xfinity Mobile residential service. Both services rely on Comcast's MVNO agreement with Verizon and tie in prioritized access to Comcast's Wi-Fi network. It's also possible that Comcast Business Mobile will integrate future wireless networks that take advantage of the 3.5GHz CBRS spectrum that Comcast won won via the auction completed last fall.

"We wanted to make the wireless [service] available to small businesses. That wasn't something we were doing previously. So, we sat down and had a very constructive dialogue," Roberts said of the new Verizon deal. But he did not go into great detail about how Comcast would package and sell such a service.

Charter Communications has also locked in an expanded and extended MVNO deal with Verizon. Light Reading has asked Charter to confirm if its agreement with Verizon also paves the way for its Spectrum Business unit to sell mobile services to SMBs.

Update: Charter confirmed it's been offering mobile to SMBs nationally since October 2019, though its offering requires that SMB customers also attach broadband service from the operator. Charter's mobile offering for SMBs is similar to Comcast's in that SMBs can get up to ten lines and mix and match devices. Spectrum Business sells Unlimited mobile for $45 per month (speeds are reduced when customers exceed 20GB of data usage in a monthly period), when bundled with Internet service, or $14 per GB on its By the Gig plan. Spectrum Business also sells an Unlimited Plus plan, which raises the monthly ceiling to 30GB before speeds are reduced, for $55 per month.

Comcast Businesses' somewhat quiet rollout of the mobile product also raises questions about whether this introduction is best characterized as a soft-launch or a widespread commercial launch. Light Reading has asked Comcast to clarify the extent of the rollout so far. The fine print indicates that Comcast Business Mobile is not available in all areas, but does not indicate if that limitation pertains only to SMBs in Comcast's traditional cable footprint or beyond it.

But the new offering represents a new line of revenue for Comcast's growing business services segment. The Comcast Business unit generated revenues of $2.09 billion in Q4 2020, up slightly from $2 billion in the year-ago quarter. Comcast Business entered the enterprise business, targeting the Fortune 1000, in 2015, but the bulk of its revenues are still derived from SMBs. 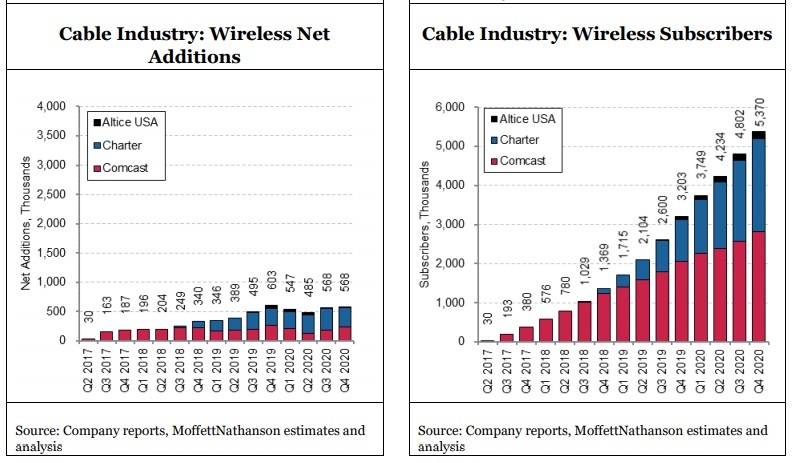 "Both Comcast and Charter appear poised to be more aggressive going forward, not least because they are now armed with an expanded and renegotiated MVNO agreement with Verizon (though we still dont know what the agreement entails)," Moffett noted.

The business services piece appears to be one of the first major expansions covered by the deal. The analyst wonders if there will be much more to come.

"It is notable that the Comcast/Charter partnership was able to renegotiate its Verizon contract with only a little over 5M subscribers between them. This raises an interesting dilemma for Verizon, and indeed for the whole wireless industry," Moffett explained. "One can imagine that Cable's negotiating leverage will be far greater when they have grown their subscriber base to, say, 15M subscribers, and then represent a significant (irreplaceable?) share of Verizons revenue and EBITDA. Will they then renegotiate again and again?"