Adding an important OTT distribution point as its fight with Comcast and Dish Network persists, Altitude TV is set to become available to certain customers of the AT&T TV Now and AT&T TV streaming services.

Access to Altitude TV, a regional sports network that's home to the NBA's Denver Nuggets and the NHL's Colorado Avalanche, via those OTT-based pay-TV services builds on the network's existing carriage deal with DirecTV, the AT&T-owned satellite TV service.

The Streamable, the first to report on the streaming pact, notes that some AT&T streaming subs see that Altitude TV appears in the guide but is not yet providing a live programming feed (the Denver Nuggets and Utah Jazz tip off for game three of their knotted-up playoff series today at 4 p.m. ET).

As is true for all regional sports networks, AT&T TV Now and AT&T TV customers need to reside in the region supported by Altitude TV. A quick zip code check shows that Altitude TV is listed as available via those OTT-TV services in the Denver metro area. 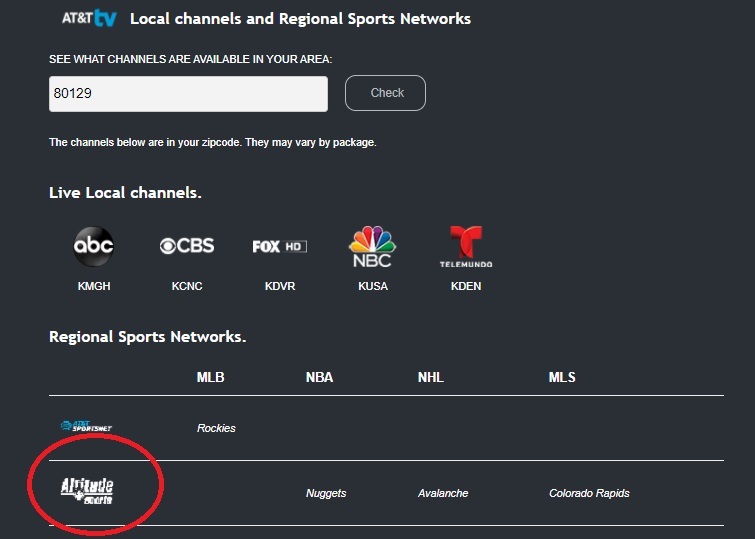 And the award for the lowest-res logo goes to...

Altitude TV is only available on the higher-priced tiers. Per the Streamable, subs can get the regional sports net if they take the AT&T TV NOW Max package ($80 a month) or the AT&T TV Choice ($65 + Fees) package. Customers on the legacy "Go Big" and "Gotta Have It" plans will also get Altitude TV, the report added.

Even as it was ironing out its new streaming deals with AT&T, Altitude TV also worked out a temporary fix during the initial rounds of the NBA and NHL playoffs to help local fans get access to the early-round playoff games.

Earlier this month, Altitude announced it had waived its exclusive broadcast rights in Denver to the first rounds of the Avalanche and Nuggets playoff games, enabling them to be simulcast nationally on NBCSN, NHL Network and CNBC. Those games have also been carried regionally by the Altitude TV channel through its existing carriage deals with DirecTV and Charter Communications.

Carriage battles press on
There's no end in sight regarding Altitude's fight with Comcast and Dish.

Altitude filed an antitrust suit against Comcast last November, alleging that the cable operator is attempting to demand a dramatic cut in rates paid to Altitude, move the RSN to a "sports tier" rather than a widely distributed, more basic pay-TV tier, drive Altitude out of business, and possibly seize the opportunitty to take over the local sports TV market with its own.

Comcast has countered that the suit is a move by Altitude to convert a "garden variety commercial disagreement into an antitrust suit" that seeks to force Comcast to carry the network in perpetuity on the RSN's preferred terms. Comcast is also fighting Altitude's allegations that the cableco is a monopoly buyer, holding that its 57% share of the regional sports market falls short of the 70% to 80% necessary to hold monopoly power. Altitude's carriage agreement with Comcast expired on August 31, 2019.

Altitude is at a similar impasse with Dish Network, though, so far, that scrum has steered clear of the courts.