Europe's regulatory authorities have cleared Vodafone's 18.4 billion ($20.6 billion) takeover of a number of Liberty Global assets in a decision that could take some pressure off beleaguered Vodafone boss Nick Read but disappoint German rival Deutsche Telekom, which has been a fierce opponent of the deal.

The approval had been anticipated after Vodafone made concessions to steer the takeover past competition watchdogs and will leave the UK-based operator in control of Liberty assets in Germany, the Czech Republic, Hungary and Romania. Provided Vodafone meets other regulatory conditions, it will turn the company into Europe's "leading converged operator," Vodafone boasted in a press release issued Thursday morning, with more than 116 million mobile, 24 million broadband and 22 million TV customers across 13 European markets.

Something to Smile About 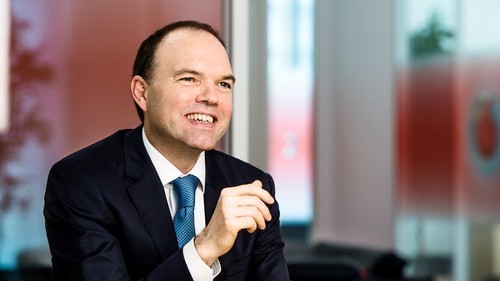 The addition of cable and TV services to its portfolio should put Vodafone in a much stronger position against competitors such as Deutsche Telekom, which offers the full range of telecom and digital entertainment services to many of its German customers. One justification for the deal was that it would address the risk of Vodafone's mobile customers switching to a provider with a broader service offering.

It also promises major cost savings as duplicate roles are eliminated and assets are pooled. Vodafone is currently eyeing total cost "synergies" with a net present value of more than 6 billion ($6.7 billion) after accounting for integration costs. Cross-selling to the combined customer base, moreover, will unlock sales opportunities worth 1.5 billion ($1.7 billion), said the company. All that will eventually translate into growth in free cash flow, it insists.

The regulatory green light seems like a welcome development for Read, who has seen Vodafone's share price fall more than a fifth since he became CEO last October. Underperforming operations in Italy and Spain, heavy spending on new 5G licenses and the possibility that regulators would oppose the Liberty takeover have all weighed on the firm's share price.

"This should come as a major relief to Vodafone. This approval has been hanging over the company, limiting its forward momentum," says Gabriel Brown, a principal analyst with Heavy Reading, a market research company and sister organization to Light Reading. "Investors will be hoping the clarity does something for the share price, which has been truly dire since the deal was announced, and, not coincidentally, since Nick Read was made CEO-designate a year ago."

Others have expressed some concern about the impact of the deal on Vodafone's fiscal position. Yesterday, ratings agency Standard & Poor's stuck Vodafone's debt rating on its Creditwatch list with "negative implications," arguing that takeover costs on top of 5G licenses expenses would make life hard for the UK operator. The S&P move lowered Vodafone's share price by 1.6% on the London Stock Exchange yesterday. But it was up 1% today, at the time of publication, after the latest news. And at roughly 27 billion ($30.3 billion), Vodafone's net debt is currently less than twice last year's earnings (before interest, tax, depreciation and amortization) -- a much lower ratio than many of its peers report.

At the time of publication, Deutsche Telekom had not responded when asked for its reaction to the Liberty deal news. But given the vehemence of its earlier objections, it is unlikely to be singing a different song. To secure regulatory backing, Vodafone has signed a wholesale deal with Telefónica, Germany's third-biggest operator, to provide broadband connections of up to 300 Mbit/s on its much-expanded cable network. That concession did not satisfy Deutsche Telekom, which says it is opposing the deal because of its impact on Germany's TV market. "Whatever kind of deals which have been struck now between Telefónica and Vodafone, from our perspective it doesn't solve the problem on the TV market," said Christian Illek, Deutsche Telekom's chief financial officer, during the operator's last earnings call.

Timotheus Höttges, Deutsche Telekom's CEO, has previously grumbled that merging Vodafone's existing cable assets and Liberty's German Unitymedia business would undo the 1990s breakup of the national cable network, which Deutsche Telekom once owned, and weaken competition. His chief concern is the "stranglehold" he says cable companies have on German housing associations. Existing legislation makes it difficult for Deutsche Telekom to access those buildings, he has previously argued. "People want to see not a merger coming but Deutsche Telekom getting weakened, which has nothing to do with improving the situation for customers or citizens of Germany," he moaned during the last earnings call.

While the European Commission has voiced concern about the deal's impact on wholesale TV competition, it sees no reason to worry about the retail market, pointing out that Vodafone's existing cable network does not overlap significantly with Unitymedia's. Accordingly, besides requiring Vodafone to strike a wholesale cable deal with another party (now identified as Telefónica), it is insisting that Vodafone does not restrict the ability of broadcasters using its TV platform to distribute content using "over-the-top" services. Vodafone will also be subject to pricing controls regarding the fees it charges free-to-air broadcasters.

Whether Höttges likes it or not, Germany is about to get a beefed-up Vodafone and an entirely new competitive dynamic. And with Vodafone expecting to finalize the transaction by the end of July, change may come fast.