BERLIN -- Cable Congress 2019 -- Reflecting the move toward higher speeds, the convergence of fixed and mobile networks and the need for a unified vision among the region's service providers to deliver to regional regulators, industry organization Cable Europe will also change with the times and restructure itself under the new name of "GIGAEurope."

The rebranded and restructured group, which aims to be an umbrella organization for the broader "connectivity industry" (rather than being one overly focused on cable), will be formally launched in early 2020, it was announced here Wednesday morning. 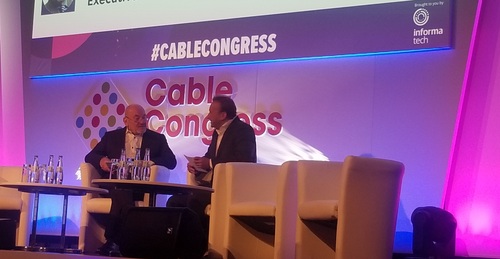 Matthias Kurth (left), executive chairman of Cable Europe, and Manuel Kohnstamm, president of Cable Europe and an exec with Liberty Global, announced some of the broad aims and goals for GIGAEurope this morning during the kickoff of Cable Congress 2019.

GIGAEurope's founding members will include "most" of the current Cable Europe membership and companies, including major regional service providers such as Liberty Global, Vodafone and Telenet.

Cable Europe leaders and industry execs on hand this morning stressed that Europe's cable and mobile service providers and their suppliers need to become less fragmented and come together to establish a unified force that can work across industries and with the region's governments and to help stimulate interest and investment in upgrading to gigabit-capable fixed mobile networks.

"We came to the conclusion that this industry needs a  group of like-minded companies that actually wants to change the narrative in a very positive way about gigabit efforts [and] gigabit investments  in short, GIGAEurope," explained Manuel Kohnstamm, president of Cable Europe and SVP and chief corporate affairs office at Liberty Global.

Kohnstamm also stressed that the message can't be centered only on infrastructure and speeds and feeds, but must likewise involve new services and industries that those networks can cultivate. "There's been too much focus on networks themselves and not enough on the spin-off of the applications layers that will evolve when you have a  super high-speed network," he said.

This more unified and cross-industry initiative must "spill over to other sectors," agreed Matthias Kurth, Cable Europe's executive chairman.

In a follow up address, Hannes Ametsreiter, CEO of Vodafone Germany, talked up a "gigabit vision and a gigabit society."

As for contributions underway at Vodafone Germany, he noted that the company now has 11.4 million homes connected to 1-Gig capabilities, and expects to push that to 25 million homes -- roughly two thirds of all homes in Germany -- in the next one to two years. 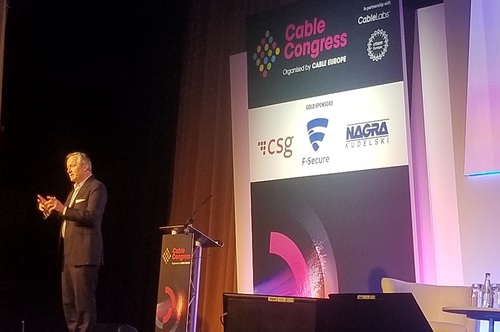 Hannes Ametsreiter, CEO of Vodafone Germany, discussed how his company will contribute toward the goals of GIGAEurope across its fixed and mobile networks.

"We need speed. We need bandwidth. We need movement," Ametsreiter said, noting that his vision for a "giga-multilayer network" will span Vodafone's fiber-to-the-home, HFC and next-gen 5G mobile networks. "That combination  is the future," he added.

In another keynote touching on the goals and aims of the new GIGAEurope effort, Joakim Reiter, group external affairs director at Vodafone group, stressed that the region has a "window of opportunity" to reposition itself as a leader in a digital transformation that will be powered by a convergence of mobile and wired networks that initially support 1-Gig speeds, and much more further down the road.

"If Europe is serious about maintaining its prosperity  the current path we are on is not good enough," Reiter said, noting that Europe is currently challenged by a "massive investment gap."

"None of us can do it alone," Reiter added. "As an industry  we have been far too fragmented in not offering policymakers a clear vision of how Europe can chart its course."