Netflix to cut streaming bit rates across Europe for 30 days

Netflix announced Thursday it will reduce bit rates for its streams in Europe for 30 days to help lessen the strain on broadband networks as millions remain in their homes to help slow the spread of COVID-19. Netflix estimates that the move will cut traffic on European networks by about a quarter.

That decision comes on the heels of an appeal from European commissioner Thierry Breton to Netflix CEO Reed Hastings for the popular subscription streaming service to switch to standard-definition "when HD is not necessary." 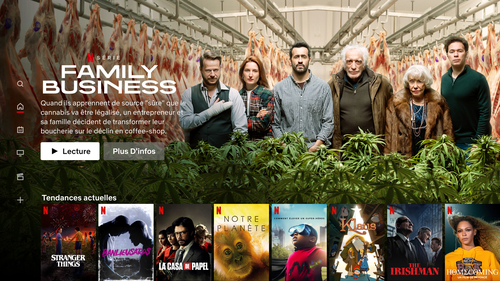 Netflix offers service across Europe. Pictured is an example of its UI for France.

"Following the discussions between Commissioner Thierry Breton and Reed Hastings – and given the extraordinary challenges raised by the coronavirus – Netflix has decided to begin reducing bit rates across all our streams in Europe for 30 days," a Netflix spokesperson said in an emailed statement "We estimate that this will reduce Netflix traffic on European networks by around 25% while also ensuring a good quality service for our members."

"I welcome the very prompt action that Netflix has taken to preserve the smooth functioning of the internet during the COVID-19 crisis while maintaining a good experience for users," Breton, once the head of France Telecom, said, according to The Guardian. "Mr. Hastings has demonstrated a strong sense of responsibility and solidarity. We'll keep closely in touch to follow the evolution of the situation together."

Netflix, which ended 2019 with 51.78 million paid subs in the EMEA (Europe, the Middle East and Africa) region, isn't enlisting an across-the-board move to standard-def streams to help keep bandwidth usage in check.

Instead, it's relying on adaptive bit-rate techniques that will help to ensure customers in Europe continue to get the level of video and audio quality they are paying for as often as possible (Netflix customers pay more for tiers with HD, 4K/Ultra HD and for extra streams per account), but at the lowest bit-rate that can be supported without inducing buffering. Additionally, for ISPs that opt for it, Netflix's Open Connect program is designed to keep data usage in check by caching its content library closer to end users.

Netflix's temporary move in Europe is likely to lead to speculation about whether it will enact something similar in the US and other regions.

While Netflix is starting in Europe to address the concerns relayed by the European commissioner about network utilization in that region, the OTT service is likewise expected to work with other ISPs and governments around the world and apply changes as needed elsewhere.