WOW to go on offensive with greenfield FTTP builds

Fresh off the sale of a handful of systems for $1.8 billion, WideOpenWest (WOW) said building fiber-to-the-premises (FTTP) networks to fresh greenfield markets will play a major role in fueling growth over the next five years.

WOW, a company that cut its teeth as a competitive cable overbuilder, told investors last week that its plan is to build out FTTP networks to greenfield markets passing at least 200,000 homes and businesses by 2027, with the potential to expand that to 400,000 locations. WOW defines greenfields as network builds to areas that are non-adjacent to its existing markets, and includes areas with low competitive intensity. 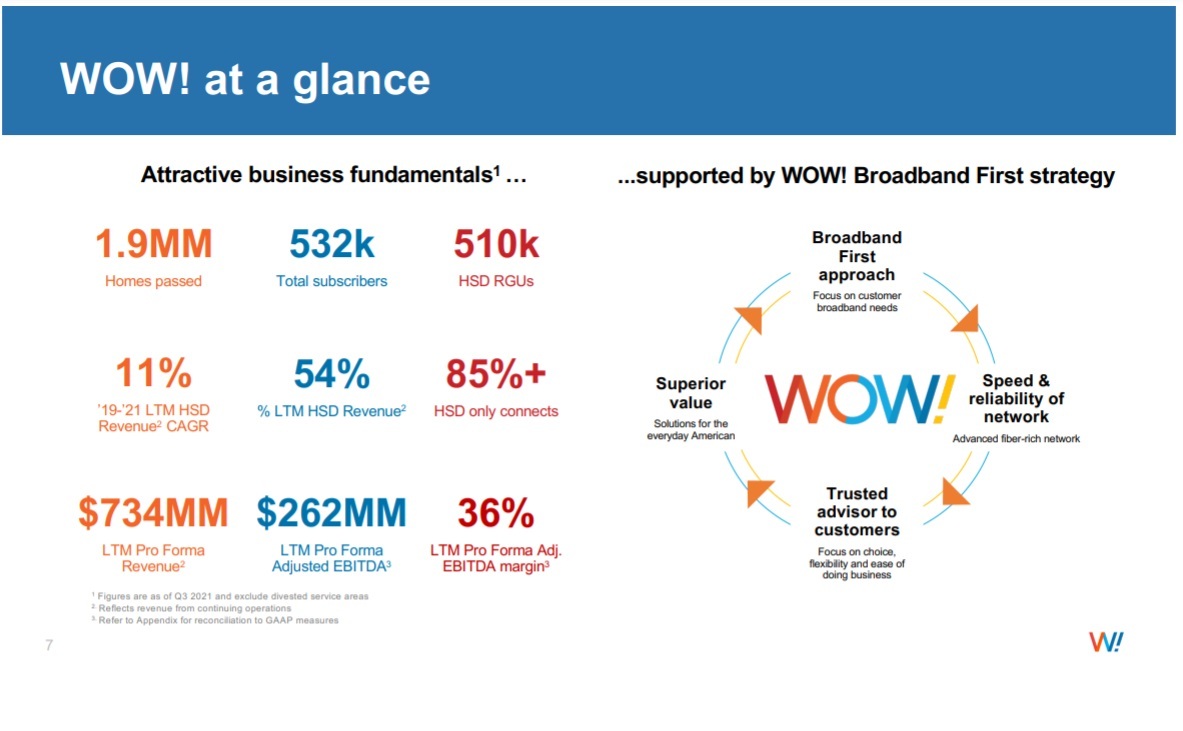 In the wake of the recent sale of five systems, WOW will head into its next chapter with 1.9 million homes passed and a 'broadband-first' strategy that has already seen 85% of new customers only taking high-margin broadband service from the operator.
Click here for a larger version of this image.
(Source: WideOpenWest)

WOW has not identified any specific greenfield markets it's targeting. But it has initiated a market selection process that factors in elements such as cost of construction, density of homes, the competitive landscape, community demographics and relationships with local power companies. WOW expects to start building greenfield FTTP networks in 2022 and begin adding subscribers from those builds in 2023.

The company will continue to "edge-out" its network to markets adjacent to its legacy footprint. WOW has added about 200,000 homes through edge-outs in the last five years. However, the greenfield deployments is deemed a higher strategic priority as the company believes it can get better returns in greenfields than it has seen in edge-out scenarios.

WOW also believes the cost per home in greenfields will be higher than it is today with edge-outs, which typically run in the range of $700 to $800 per location. But the company says the tradeoff is that penetration rates in greenfield areas will likely exceed what it has seen in more competitive edge-out areas. WOW expects its focus on less competitive greenfield markets will yield penetration rates of more than 30%.

"To me, the biggest risk is not doing enough, fast enough," Teresa Elder, WOW's CEO, said. "We think this is a significant opportunity for us ... Greenfield gives us another engine of growth."

WOW has modeled $160 million in greenfield spend through 2025, but could raise capex for those projects if the strategy is as successful as the company expects it to be, WOW CFO John Rego said.

The company thinks this build vs. buy strategy is smart business. Rego estimates that WOW can build new markets for less than 5x EBIDTA at a time when some companies are willing to pay 11x EBIDTA or more to buy markets.

WOW believes its move to an all-IP network (meaning an elimination of QAM-based services) will enable it to quickly spool up deployments in greenfields. "Because we're doing an all-IP network, that reduces the amount of capacity that's required versus a legacy buildout," Hryckiewicz said. "We can leverage existing third-party medium-haul and long-haul providers, acquire a broadband circuit to that location and really focus on the build, and really build it rapidly."

Nothing in WOW's network expansion plans has ties to the US's new multi-billion-dollar infrastructure law, but the company is exploring potential opportunities. "So, anything related to that would be upside," Elder said.

The greenfield build enters the picture amid a broader transformation underway at WOW, which de-levered its business and chopped debt after selling off five systems earlier this year for a combined $1.8 billion. It sold its Cleveland and Columbus, Ohio, systems to Atlantic Broadband; and its Chicago; Evansville, Indiana; and Anne Arundel, Maryland, systems to Astound Broadband. 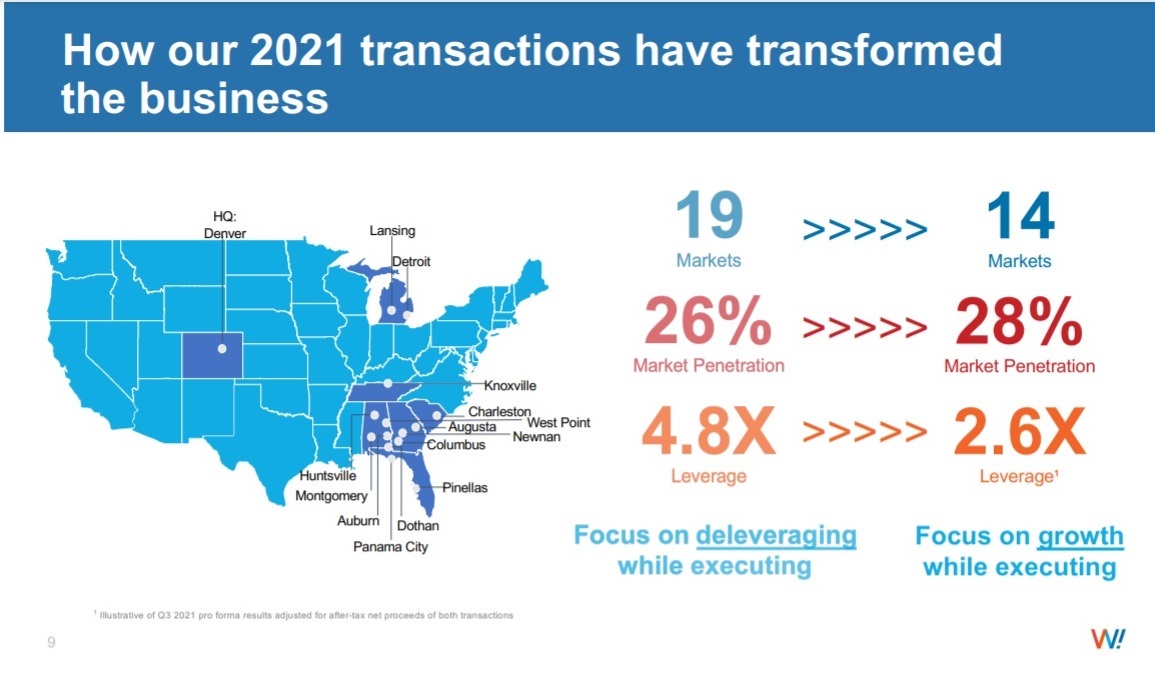 WOW contends that sales of a handful of systems has cut debt and put WOW in position to fund greenfield builds and network edge-outs through its business operations.
Click here for a larger version of this image.
(Source: WideOpenWest)

WOW reckons its de-levered position (going from 4.8x to 2.6x) puts it in position to fund business operations and its expansion plans without having to absorb more debt. "We are now positioned as a low-leverage, high-growth business," Elder said.

A big piece of that transformation has been WOW's pivot to become a "broadband-first" company focused on high-margin broadband and less so on pay-TV. About 85% of new WOW customers take only broadband.

WOW's gross margins on high-speed Internet are in the neighborhood of 95%, and dip down to about 20% for pay-TV, according to Rego. "The high-speed data business is less costly to run, period," he said.

An evolution of WOW's operations is also part of the transformation. Of note, WOW has moved from five separate billing systems to one, enabling more localized and specialized offers. Additionally, the vast majority (78%) of WOW's new broadband subs use self-install kits. Sales through online channels have grown from 3% in 2018 to about 30% today.

Under its plan, WOW expects high-speed data revenues to generate a compound annual growth rate (CAGR) of 9% to 10%, with total revenues generating a CAGR of 1% to 1.5%.

No rush on DOCSIS 4.0, open to mobile/broadband bundles

WOW also shed some light on future upgrade plans for its legacy HFC plant. WOW will eventually upgrade to DOCSIS 4.0, but isn't in a hurry to do so.

"We'll upgrade to DOCSIS 4.0 when the time is right, when we need to," Hryckiewicz said.

"We've always been looking at that," Elder said. "If it makes sense for us, we may do something like that."

"We are taking a very close look at it, whether it's an MVNO with one of the providers today or some other way of getting into providing that product and that bundle," added Don Schena, WOW's chief customer experience officer.

As for video and pay-TV, WOW now offers its own IPTV service, WOW tv+, in all markets, and promotes various streaming services. But video is a low priority – the company expects pay-TV sub losses to continue at the rate of 18% to 20% per year.

"We are absolutely fine with that," Rego said.