Slowing broadband growth has led to a sell-off of cable stocks to the point there are concerns the sluggish growth will not only continue but actually go negative, amid rising competition from fiber buildouts and the emergence of fixed access wireless (FWA) options.

But not all analyst and industry observers see eye-to-eye on what's coming. While some anticipate a steady decline that could eventually lead to broadband subscriber losses, the more bullish view holds that such concerns are overblown. The truth is probably somewhere in between.

On the more bearish side of the ledger, the analysts at LightShed Partners recently issued a report (registration required) declaring that "the cable broadband growth era is over," and wondering where the bottom will be for a Tier 1 cable op such as Charter Communications.

On the other end, a recent report from MoffettNathanson (registration required) holds that current cable valuations "are completely out of step" on the notion that broadband growth will continue, just at a slower pace, with wireless poised to be cable's new growth driver.

No matter the side one leans, it's abundantly clear that slowing broadband subscriber growth paired with the potential for lower future broadband average revenues per unit (ARPU) and capital spending increases to keep pace with fiber performance are a recipe for concern.

Prior to the posting of Cable One's Q1 2022, US cable broadband growth slowed to 3.2%, according to MoffettNathanson. "That is, in a nutshell, what people are worried about," MoffettNathanson analyst Craig Moffett explained. 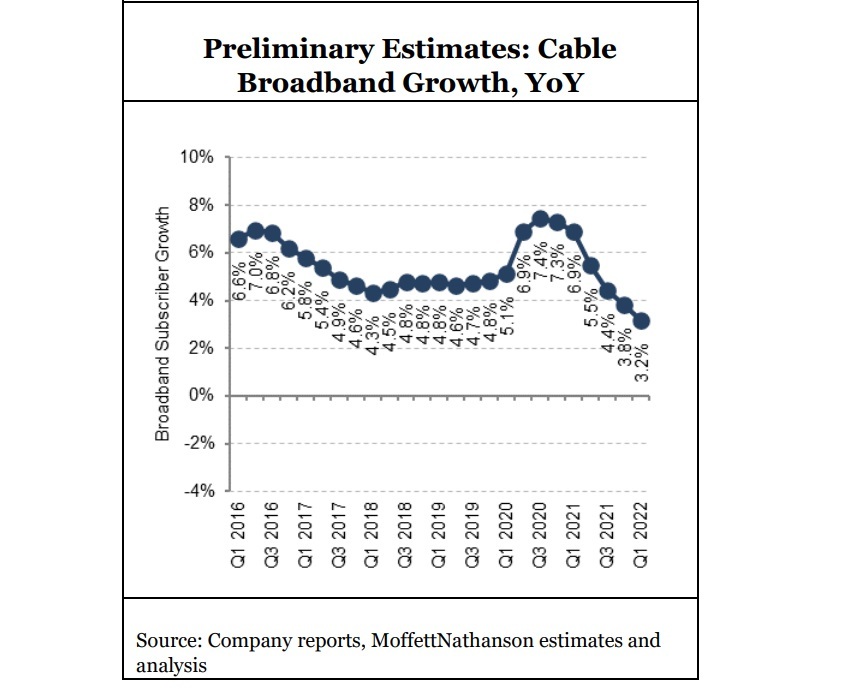 Moffett notes that other elements underpinning the bear narrative are that FWA and expanding and competitive fiber buildouts will cause cable broadband subscriber and ARPU growth to go negative, and concerns that "fiber superiority" will force cable to push upgrade plans that send capital intensity skyward.

Moffett acknowledges that competition will no doubt play a role in a broadband market that's already pretty saturated, but also thinks the degree of concern about share loss to broadband rivals is somewhat overblown. Although cable broadband growth is likely to decelerate further, he doesn't expect it to go negative.

Moffett does acknowledge that FWA is "unquestionably having some competitive impact," particularly as the use of midband spectrum continues to take hold.

There's fear that FWA is "crowding out" opportunities for cable broadband growth, and it's clear that T-Mobile's fixed wireless offering, despite evidence that it is skewing rural, is getting subs from areas where cable does compete, Moffett noted.

"But much of its growth is best viewed as expanding the market, either into new categories and/or new geographies," explained the analyst, who remains skeptical about FWA's ability to support long-term scale. "It appears to us, however, that the competitive impact of FWA on Cable is likely being overestimated."

Count rural-focused operator Cable One in that camp. FWA is "not a concern right now for us," CEO Julie Laulis said on the company's recent earnings call.

LightShed analysts Walt Piecyk and Joe Galone have a different view. They expect Verizon and T-Mobile to sign up 9.3 million FWA subs by the end of 2026, good for a 7.5% share of the market, but below the guidance of the operators themselves.

"If wireless operators can deliver on their own guidance, cable operators might face a contraction in their sub base rather than simply a deceleration of growth as reflected in our models," they wrote.

Fiber expansion, meanwhile, had a "very modest" impact on the cable broadband market in the first quarter of the year. Even as AT&T's fiber sub growth soared to +289,000 in the period, Verizon's Fios growth was a relatively tepid +60,000.

Moffett's estimates in the report did not include Frontier Communications' Q1 results, which saw the operator add a record 54,000 fiber subs.

Network expansion and the search for cable's broadband floor

Looking further out, analysts are also wondering where the floor on cable subscriber growth will be. The analysts at LightShed Partners hold that it's "plausible that Charter's broadband subscriber base could contract within the next few years."

Moffett, though, sees some gap-filling coming way of the cable company's ongoing network expansion, which entered the fray before FWA became a focus for cable investors. He estimates that Charter's homes passed footprint has seen a compound annual growth rate of 2% over the past four years, and 1.4% for Comcast.

Both Charter and Comcast are expected to participate in the broadband piece of the Infrastructure Investment and Jobs Act. Charter was also a big player in phase I of the Rural Digital Opportunity Fund (RDOF), with Moffett expecting Charter's RDOF haul to contribute net adds of 116,000 in 2024 and 142,000 in 2026.

For Charter, the combined opportunities of organic growth of homes passed, edge-outs to adjacent areas and RDOF buildouts will yield growth of 600,000 to 700,000 subs this year, and climb to 800,000 by 2025, Moffett believes. Comcast's in-footprint housing unit growth and subs from edge-outs could amount to about 600,000 annually, he noted.

But even those figures aren't a "floor" for annual broadband net adds, as the number of subs gained or lost in legacy footprints will also factor into the final tally.

Moffett also believes that wireless represents the "next leg of growth" for US cable, and is an area that's been discarded or overlooked amid all the negative attention given to cooling broadband subscriber growth. He estimates that US cable captured about 38.7% of mobile industry net adds in Q1, or as high as 75.4% when losses from 3G network shutdowns at AT&T and T-Mobile are included.

The LightShed analysts acknowledge the wireless opportunity for cable, but don't expect that piece of the business at Charter to go profitable until 2023, when subs are expected to top 5 million. Comcast's mobile business turned the corner to profitability about a year ago.

Yet another potential concern is capital intensity that could surface if fiber competition forces cable operators to accelerate spending on network upgrades. For now, analysts aren't overly worried about the current path forward for Comcast and Charter.

Comcast and Charter have largely focused on "high-split" upgrades to beef up upstream capacity on existing DOCSIS 3.1 networks, with DOCSIS 4.0 a future focus for their widely deployed hybrid fiber/coax (HFC) networks.

Altice USA is taking a different path with a fiber-to-the-premises (FTTP) upgrade program targeting two-thirds of its footprint by the end of 2025. While the initial spend is higher compared to HFC upgrades, Altice USA execs believe the operational benefits gained from biting the bullet with FTTP upgrades will more than offset those initial costs.