New household formation has long been viewed as a gauge for the growth and overall health of the US broadband market. But a batch of fresh US Census Bureau provides a similar indicator, illustrating which cable operators were impacted the most over a 12-month period marked by sluggish population growth.

"New data from the census highlights some important differences in the footprints of major cable operators, and how those differences informed their broadband growth rates last year," MoffettNathanson analyst Craig Moffett explained in his analysis (registration required) of the new Census Bureau data. That data showed that US population growth was just 0.1% between July 1, 2020, and July 1, 2021  the lowest in the country's history.

Moffett's analysis of the Census data indicated that, in certain markets served by certain operators, there were some clear winners and losers for broadband growth. Generally, the most populous US counties, such as New York County (Manhattan), saw declines, offset by growth or less dramatic population losses in smaller counties.

Moffett determined which cable operators in his coverage (Comcast, Charter Communications, Altice USA and Cable One) were the most negatively affected by low population growth and which ones might have been net beneficiaries of the fastest growth by aggregating the population by county in each operator's footprint using FCC Form 477 data as of Q4 2020. Using those totals, he then calculated a weighted average population growth for each operator's total footprint based on the county-level annual estimates published by the Census Bureau. 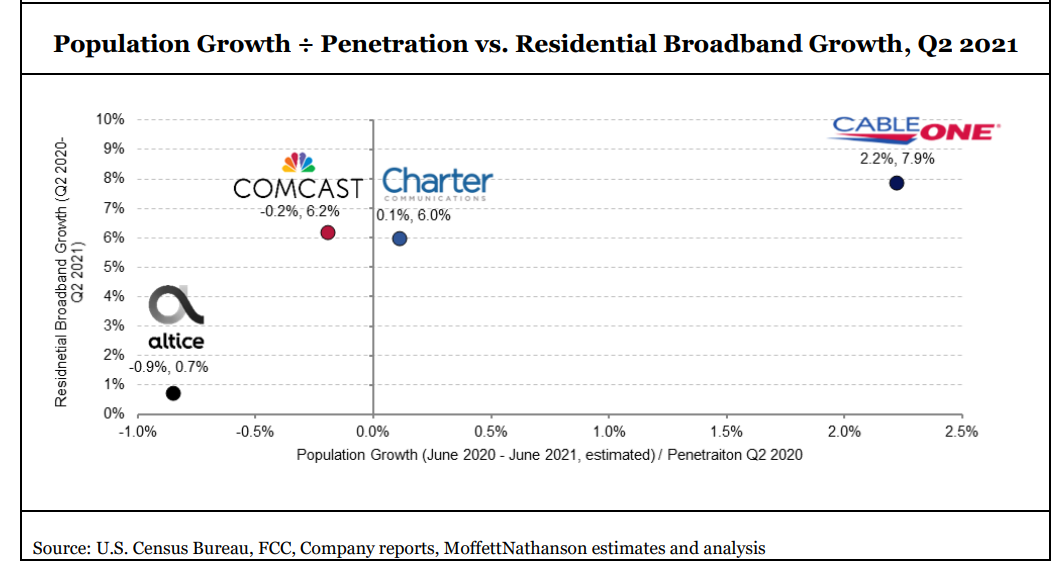 "The differences between operators are not inconsiderable," Moffett explained. "Although the totals for Comcast and Charter are broadly similar, and close to the national total (which one would expect, given their scale), the weighted-average population growth implies a much more meaningful headwind to Altice USA (at -0.4% growth), and a significant tailwind to Cable One (at 0.7% growth).

The analyst acknowledged that population growth "is only a proxy for household formation" and that there is much more to determining broadband subscriber growth rates, such as network expansions and network edge-outs as well as each market's competitive intensity. But "there is a clear correlation between population growth and reported broadband growth," Moffett added.

And it's not yet clear whether the recent shifts in population, driven in part by the COVID-19 pandemic, will be long lasting or reverse themselves. In fact, some areas that have lost population during the pandemic are reportedly seeing "something of a rebound," the analyst pointed out.

"Our broader takeaway, though, is that it is a mistake to ignore a factor as important as the population growth/new household formation growth rate in a given operator's footprint," Moffett wrote. "Think of the market growth rate as something like the genetic endowment of each operator. For better or for worse, genetics matter."