Falcon V Systems said it has closed a strategic round of funding with Charter Communications and existing investor Liberty Global that will pave the way toward an "open" approach to the emerging distributed access architecture (DAA).

Falcon V Systems a Poland-joint venture between Liberty Global and Vector Group, didn't reveal how much was raised. But it did say the cash infusion will accelerate the development of network virtualization technologies, including a new MAC Manager for the proposed "Open DAA" platform.

The project is starting to come together as cable operators become more active in their pursuit of next-generation hybrid fiber/coax (HFC) networks. That includes a focus on DAA, a prerequisite for DOCSIS 4.0 that pushes key electronics and functions toward the edge of the network, enabling faster speeds and lower latencies. The work also factors in as operators seek to shift to cloud-native architectures for the access network.

Falcon V's work with Liberty Global and Charter should give the initiative some built-in scale as it involves major operators that serve millions of subscribers in parts of Europe and the US. And there's some corporate connections to consider as Liberty Broadband, a unit of Liberty Media, holds a 26% stake in Charter and owns Alaska's GCI.

Falcon V, a company that bills itself as an "independent challenger" in the market, didn't go into great detail about its approach and how it expects to help operators avoid vendor lock-in for DAA. But a high-level diagram from the company illustrates a vision for a disaggregated and virtualized access network using DAA devices from a handful of suppliers, along with converged cable access platform (CCAP) cores from at least two vendors. 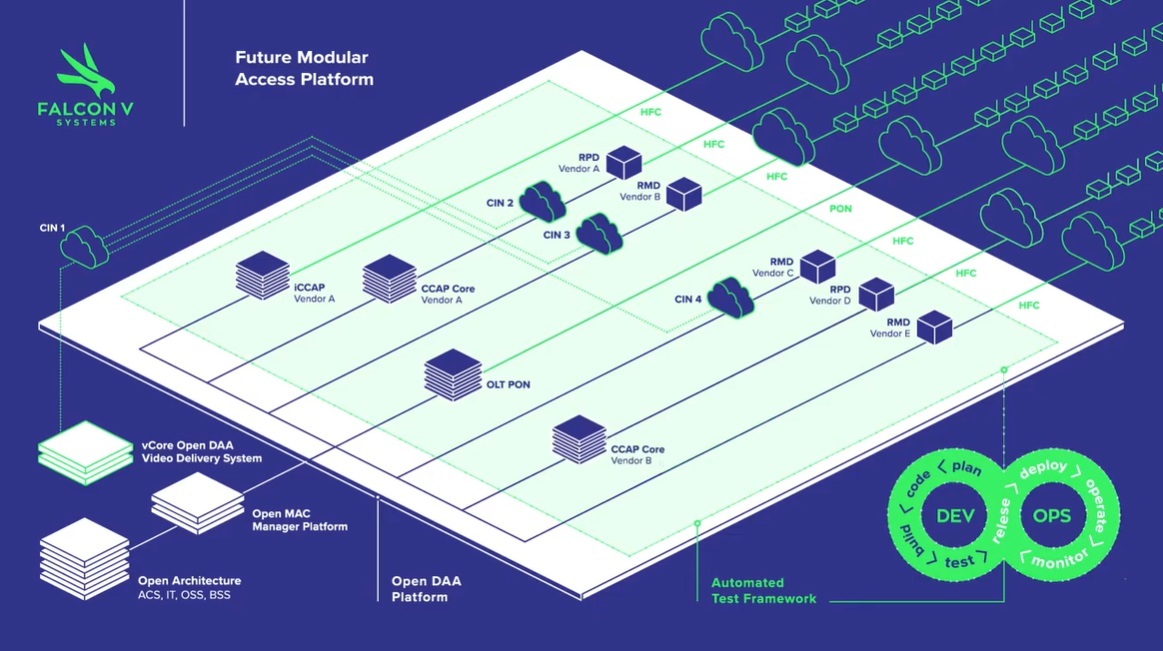 The general idea of a MAC Manager is to enable operators to provision and manage a mixed environment of network devices for DAA, including both remote PHY devices (RPDs) that extend the PHY layer to the edge and remote MACPHY devices (RMDs) that also put the MAC at the edge. Either way, operators will gain a new level of intelligence at the optical node that will require a much higher degree of virtualized management capabilities.

Falcon V appears to be poised to step in and provide the blueprint for the interworking protocols for those systems, Jeff Heynen, VP of broadband access and home networking at Dell'Oro Group, said. Heynen said that sort of approach will also come in handy as operators deploy DAA networks with multiple node vendors and utilize devices that will likely be powered by silicon from several suppliers.

"There is a role for a company like Falcon V to piece that together," Heynen said. On that point, he notes that the CableLabs specifications for the Flexible MAC Architecture (FMA) are effectively "wide open."

Heynen said Falcon V's work with Liberty Global and Charter has some parallels with Comcast's engagement with Harmonic for a virtual CCAP that uses Harmonic's CableOS platform. With a nod toward openness, Harmonic also has expressed interest in having its MAC integrated with cable network hardware with third-party suppliers.

Heynen said the Falcon V announcement represents more "early jockeying for positioning" as the cable industry starts to prepare for FMA and DOCSIS 4.0.

Today's strategic announcement could also be considered another alternative approach that has clear and direct cable operator involvement. Heynen points out that another potential variable on the table is the ongoing scuttlebutt that Comcast is exploring a way to license or syndicate its approach to the virtual CCAP to other operators.

"That's on the mind of a lot of vendors and a lot of operators," he said.

Yet another wrinkle, Heynen added, is the potential role that hyperscalers might play in future access networks, whereby some of the control plane and certain network management functions could be offloaded to the cloud. Operators "are weighing the cost and benefits" of that approach, he said.

Some of that is already taking hold. Last month, Harmonic announced it had integrated CableOS with the Google Cloud Marketplace, enabling support for elements such as a vCMTS, a virtual PON or video caching services and applications. Such a setup could enable a cable operator to run instances of a vCMTS in the cloud rather than running it at a localized facility.

"The idea here is to bring the cloud much deeper into the network," Gil Katz, Harmonic's senior vice president of cable access business operations, told Light Reading at the time.