Full speed ahead for low-latency DOCSIS

"We may be on the cusp of a real revolutionary change in the user experience, all stemming from improvements in latency," Matt Schmitt, principal architect at CableLabs, said in a keynote presentation during Cable Next-Gen Technologies & Strategies, an online event hosted last week by Light Reading. "What you're really doing is improving the experience that your customers have when you improve the latency on your networks."

While online gaming and video conferencing tend to get top billing among apps or services that will take advantage of LLD, supporting low latencies will boost the experience almost across the board.

"It can even have an impact on day-to-day activities like web browsing," Schmitt said.

CableLabs has already explored that scenario in lab tests showing how quickly a web page loads at certain data rates and when paired with different latency-focused round-trip times. At a certain point, web pages load times reach a limit no matter what the underlying data speed is. But if the round-trip time is aided by lower latencies  such as going from 100 milliseconds to 20 milliseconds  the results improve dramatically. 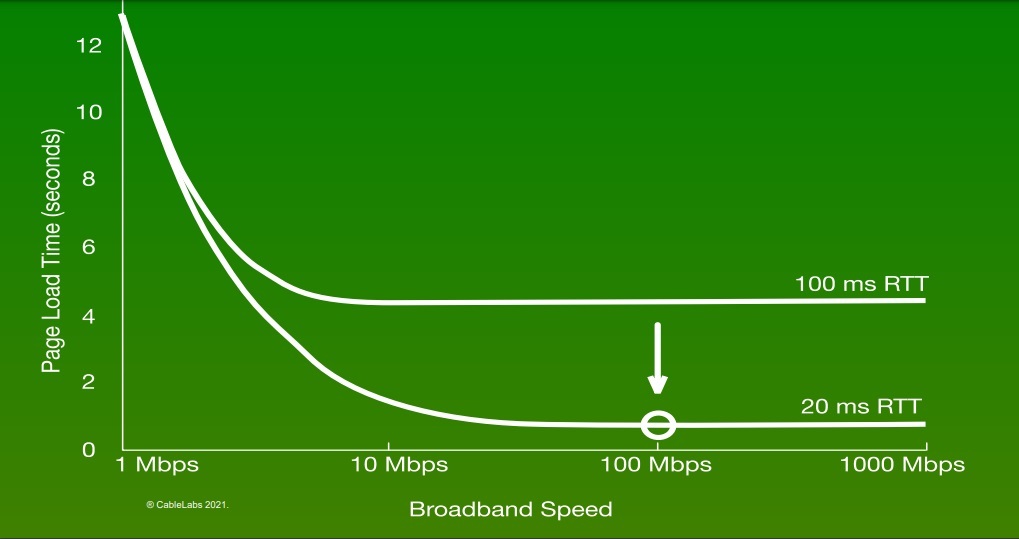 Click here for a larger version of this image.
(Source: CableLabs)

Those web page load times are "really limited by the latency, not the speed of the connection," Schmitt said. "Reducing latency is going to make a significant impact to what end users see and what their experience is on the network."

For DOCSIS 3.1, the biggest source of latency, by far, is queuing delays, Schmitt said. Transmission Control Protocol (TCP) has used a congestion control algorithm called "Reno" since the mid-1980s that probes available capacity on a path to get data through reliably. While TCP Reno can ensure fair sharing of a link, it does encourage large buffers (to capture potential packet losses) that can lead to problematic queueing delays.

But to support high data rates (think multi-Gigabit links) paired with lower latencies, there's need for a different congestion control algorithm. For that, CableLabs has hung its hat on Low-Latency Low-Loss Scalable Throughput (L4S), a technology that originated at (and is still being defined by) the Internet Engineering Task Force (IETF). L4S dynamically monitors bottlenecks and congestion in a way that adjusts sending rates before they start to lose traffic.

L4S, Schmitt said, can help to enable the full utilization of multi-Gigabit links by addressing the scalability, buffering and delay issues associated with legacy congestion algorithm technologies. And L4s is designed to co-exist with classic TCP technology.

"From the DOCSIS perspective, we have built support for this into Low Latency DOCSIS from Day 1," Schmitt said. "We think this is a great solution for applications that want high data rates, consistent low latency, and near-zero packet loss."

LLD and L4S in the CPE

Schmitt acknowledges that there are perceptions that LLD is a ways out on the horizon if all network gear must support L4S to make it all happen. While it's true that an application would need to support L4S to take advantage of these low-latency capabilities, something as simple as a DOCSIS cable modem or gateway equipped with L4S can supply the critical "bottleneck link" in this setup, he said.

"We think this is one of the key, critical pieces of network infrastructure that you want to have support for this technology," Schmitt said. "Obviously, we want to see it go further, but we think this is a critical groundwork piece that really establishes a future Internet that has low latency and high capacity  We think you might see this a little faster than maybe you might believe."

In fact, some of that initial work is already done or underway among suppliers of DOCSIS consumer premises equipment. Minim, which merged with Zoom Telephonics last year, recently became the first vendor to achieve CableLabs certification for a D3.1 gateway model that supports the new low-latency capability.

"That piece of it is emerging," he said, noting there are discussions underway about implementing L4S in network equipment even as it works its way through the IETF process. Schmitt said CableLabs (through its Kyrio subsidiary) is aiming to conduct latency performance tests on cable modem termination systems (CMTSs).