CommScope says it is primed and ready for the low-latency era of DOCSIS to get underway.

Tapping into low-latency specs originally developed for DOCSIS 3.1 that have been carried over to DOCSIS 4.0, CommScope says it has built the piece parts necessary for a full Low Latency DOCSIS (LLD) solution that can operate on its own cable modems, gateways and network gear and also interoperable with DOCSIS products from other vendors.

"From a technology point of view, it's baked," Kevin Wirick, VP of strategic business development for CommScope, explained in a recent briefing on the company's LLD platform, which targets round-trip latency on DOCSIS networks in the range of 5 to 10 milliseconds.

CommScope has conducted internal lab trials showing how LLD supports low-latency apps even as networks become increasingly congested (more on this further down) and is preparing to conduct a lab trial with a "large" unnamed cable operator. Beyond that, CommScope intends to gather more field experience with LLD and prepare for deployments.

As for commercial readiness for CommScope's LLD platform, "We see a path to do it this year," Wirick said.

The good news for operators is that LLD does not require any additional hardware, as CommScope's firmware for LLD can be installed on existing DOCSIS 3.1 cable modems and gateways, Converged Cable Access Platform (CCAP) chassis (such as CommScope's own E6000), and emerging distributed access network components such as remote PHY and remote MACPHY devices. To flesh out its full LLD platform, CommScope has also developed a network management and analytics element as well as a subscriber-facing dashboard.

Speaking Wednesday on an LLD-focused webinar hosted by Light Reading and sponsored by CommScope, Wirick noted that the company's LLD firmware for CPE is slated to reach production readiness in the next few months. The LLD firmware for CommScope's E6000 is included in release 10, with support for DAA to follow.

Gaming moves to the cloud

CommScope's focus on LLD is emerging as segments of the consumer market, such as online gamers, appear eager and willing to pay a premium for products and services that reduce latency. Meanwhile, the market for cloud gaming services, such as Google Stadia and what Netflix has under development, are only amplifying the need for low-latency products and capabilities. That's partly because these new cloud gaming services aren't merely about more conventional gamer-to-gamer interaction, but rather about a more complex offering whereby the games are rendered in the cloud, encoded and passed back down through the network.

Cable operators have already been keying on the trend by introducing new premium products tailored for online gamers. Cox Communications, for example, now markets a product called Cox Elite Gamer that is bundled with its top shelf Wi-Fi/DOCSIS 3.1 router, or sold for an extra $6.99 per month to customers who own their own cable modem.

More recently, RCN, Grande Communications, Wave Broadband and enTouch (all part of Astound Broadband) introduced a premium, gaming-optimized Wi-Fi 6 router from Netgear that can be paired with an app that improves ping times and prioritizes in-home network bandwidth.

While those latency-cutting products focus on elements such as the CPE or efficient Internet routing, they also tend to dance around the cable access network, which historically has been a primary source of latency or latency variability. That's where LLD enters play. 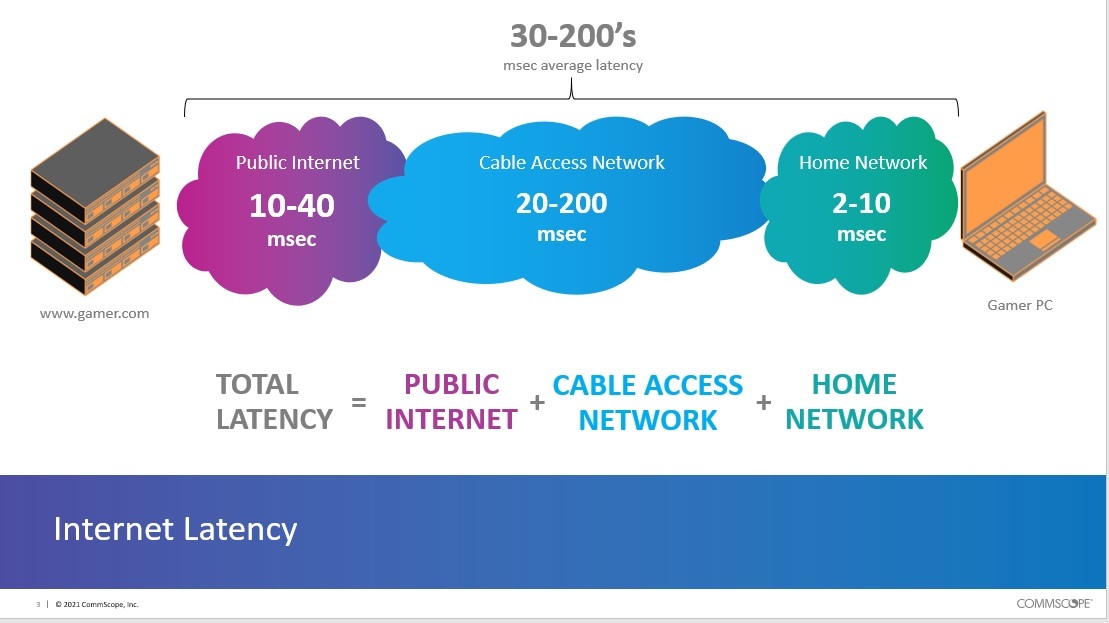 Click here for a larger version of this image.
(Source: CommScope)

From a high-level, LLD works by separating small, delay-sensitive, non-queue-building traffic (such as key clicks for an online game) from the primary and much heavier queue-building traffic that, for example, might handle a video stream or a large file upload or download. LLD effectively makes a dynamic bandwidth split between the low-latency "express" lane and the primary "classic" lane that, together, still equal the total subscriber bandwidth.

"It creates a separate lane for delay-sensitive traffic," Wirick said of LLD.

He also likened this concept to a "quiet car" on a train. In that analogy, the occupants of the low-latency quiet car are kept separate from the other travelers, but the overall capacity of the train stays the same, and they all still get to the same destination.

"We're grouping traffic that is latency-sensitive together as opposed to different brands of traffic," Wirick said

That's an important distinction as new low-latency services and capabilities, including LLD, will certainly face some scrutiny from network neutrality advocates. Like the cable industry at large, CommScope stresses that LLD conforms with net neutrality principles.

"This is not priority-based," Ayham Al-Banna, director of strategic business development and engineering fellow at CommScope, said, noting that the aggregate service flow delivered to the customer does not change even as low-latency traffic and other traffic are separated into their own lanes. "The priority of the gaming traffic does not change. It is not higher than the priority of the classic traffic."

To test the mettle of LLD, CommScope set up a lab trial with 130 modems representing a typical service group, with half of the lot LLD-enabled. CommScope then used simulators to generate various types of network traffic, such as video conferencing, games, email, and file transfers, and tracked the performance of the modems. The tests showed that the impact on low-latency traffic for apps like gaming was minimal even under increasing traffic loads. 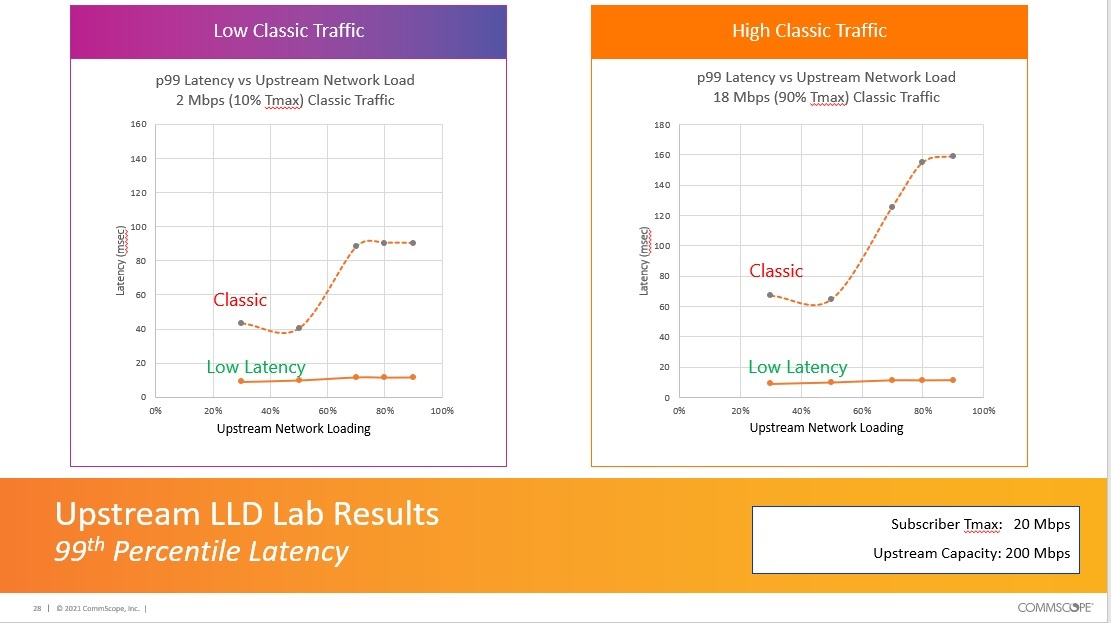 Click here for a larger version of this image.
(Source: CommScope)

While interactive and cloud gaming and video conferencing are prime candidates for LLD, Wirick points out that the technology serves as a good fit with other apps and services that require low-latency, such as augmented reality and virtual reality. It can also be used to improve simple web browsing.