Virgin Media O2's ambitious plan to upgrade its entire UK network to fiber-to-the-premises (FTTP) over the next seven years raised plenty of eyebrows last week. It also raised some big questions about the long-term viability of hybrid fiber/coax (HFC) networks and the future of DOCSIS 4.0.

Liberty Global executives spent a sizable amount of time discussing that decision and the strategy behind it on the company's Q2 2021 call on Friday (July 30), and addressed industry concerns that Virgin Media O2 was preparing to walk away from HFC and DOCSIS for good.

While it's clear that Virgin Media O2 will skip over DOCSIS 4.0 and upgrade to FTTP to take advantage of the deployment economics for fiber present in the UK market as well as the capabilities of FTTP in an increasingly competitive market, execs also were clear that the UK unit wasn't about to plop HFC into the dustbin of history.

An 'overlay,' not a 'replacement'

DOCSIS "will be part of our network solution in the UK for a long time to come," Mike Fries, Liberty Global's CEO, said on the call, likening it to an "overlay" as opposed to a replacement.

"We're not decommissioning our cable network. Quite the contrary  we are simply expanding its capacity by pushing the fiber that's already there in the ground even closer to the customer," he said.

Customer FTTP installations will be done on an on-demand basis, so Virgin Media O2 won't be flipping over everyone to fiber overnight as the rollout expands. The operator will continue to use its DOCSIS 3.1 network, which will be ready to deliver 1-Gig speeds across the board, by the end of the year (with 2-Gig on the roadmap), during what will likely be a lengthy migration.

Fries also pointed out that Virgin Media O2 has already been active in FTTP deployments with a "Project Lightning" build that now covers about 7% of the company's homes in the UK. The big difference is the new plan, which will span about 14.3 million homes, is more brownfield-focused. 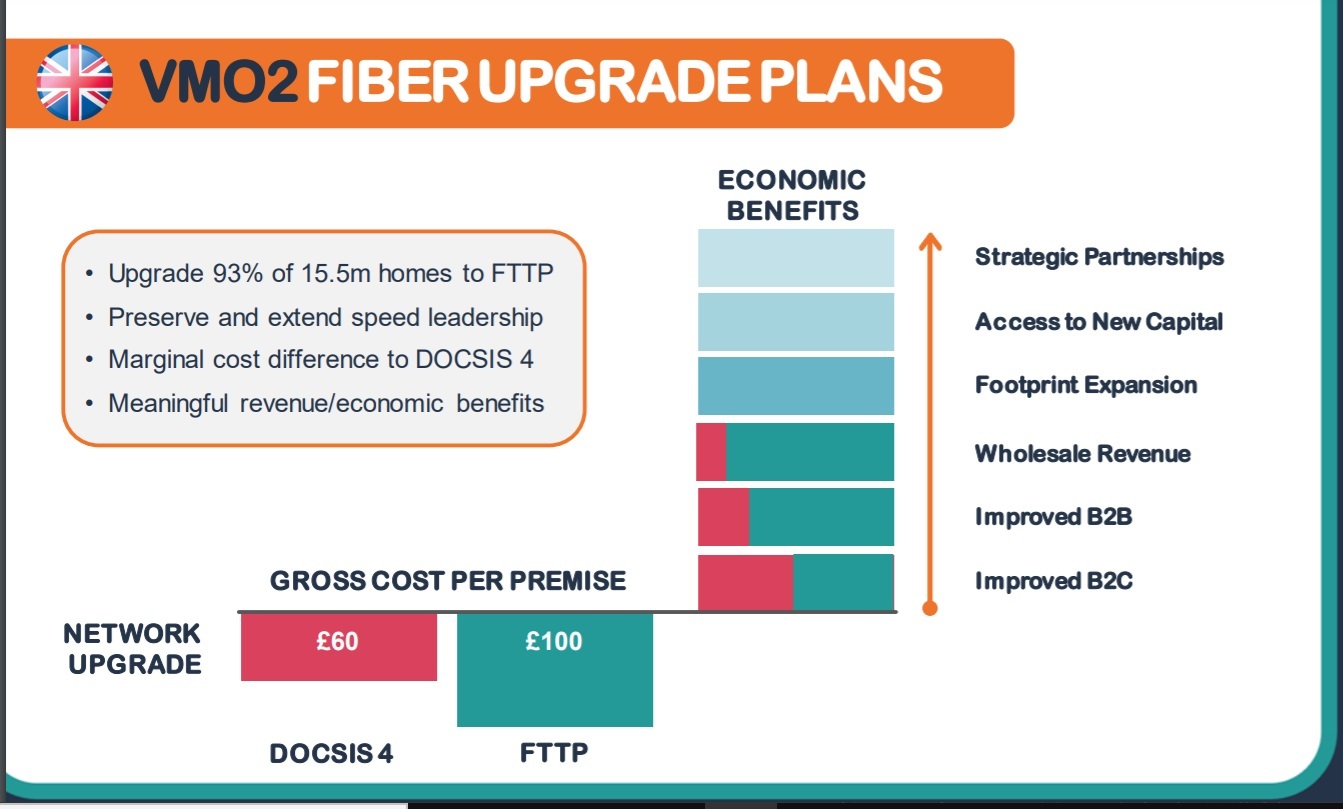 Fries also maintained that Virgin Media O2 will be able to get it done for about £100 per premises passed, due in part to underground ducting that cut down the need for expensive digging and construction. The company will of course incur more costs to connect the drop to the home, but those deployments will be success-based. However, Liberty Global is not giving any guidance yet around what portion of customers in the UK will require or want a fiber connection and how the cost implications (such as the need for the new drop and customer premises equipment) will play out in those instances.

"We have worked that through," Fries said. "But in terms of disclosing that, I think it's a little premature."

The marginal expense between deploying FTTP and DOCSIS 4.0, which does require some plant work and the move to a more fiber-rich distributed access architecture, "made this decision pretty easy in the UK," Fries said.

The expectation is that these new fiber connections will drive more revenue, but Fries also acknowledges that there's also value to be gained from the "marketing halo around fiber that seems to be building in the UK."

On that point, Fries said the competitive situation in the UK also played a role in the decision, calling BT's and Openreach's plans around 1-Gig a "me-too product."

"We're going to have the advantage of being there first across the entirety of our footprint, and we'll be marketing aggressively both fixed-mobile products as well as 1-Gig products well ahead of the vast majority of these operators because we're already there," he said. "We're just basically further supercharging our networks for the next ten years by ensuring that we'll have symmetrical 10-Gig when and if that market requires it."

Meanwhile, Virgin Media 02 is also evaluating an FTTP expansion to an additional 7 million homes  "sort of a supercharged Lightning," Fries said, adding that discussions are underway with financial and strategic partners about how that might take shape.

Liberty Media did face some pushback on the call from analysts regarding the relatively low, anticipated costs for the FTTP upgrade in the UK. Some also brought up the fact that Project Lightning's construction hasn't always been a walk in the park.

Fries said Project Lightning's early issues are in the past and that the buildout, which now covers some 2.5 million homes, "has been a machine" of late.

As for the expected costs for the new FTTP upgrade plan, he welcomed anyone to quiz the company's suppliers. "Our credibility or ability to achieve this, in my opinion, is sound and really not that questionable," Fries said.

Lutz Schüler, Virgin Media O2's CEO, reiterated that the use of existing ducts in the company's existing "fiber-deep" DOCSIS 3.1 network helps to make the economic goals achievable. That, he said, "allows us to really focus the upgrade capital basically on a significant portion of the passive part of the network."

Schüler also said Virgin Media O2's experience with FTTP construction with Project Lightning should not be underestimated. "There are construction costs," he said of the UK fiber upgrade plan. "But [they are] significantly lower than when you're building a brand-new territory like we are today doing in Lightning ... So, we're pretty confident that we understand the process and that we will hit those targets."

And Fries stressed that the big fiber upgrade being pursued in the UK should not give a "direct read" on how Liberty Global will move ahead with its networks in other European cable markets. The plan is to use a blend of wholesale access deals and and DOCSIS 4.0 and FTTP upgrades.

"The truth is we have multiple paths to 10-Gig in every market, and we're evaluating the right path on a case-by-case basis," he said. 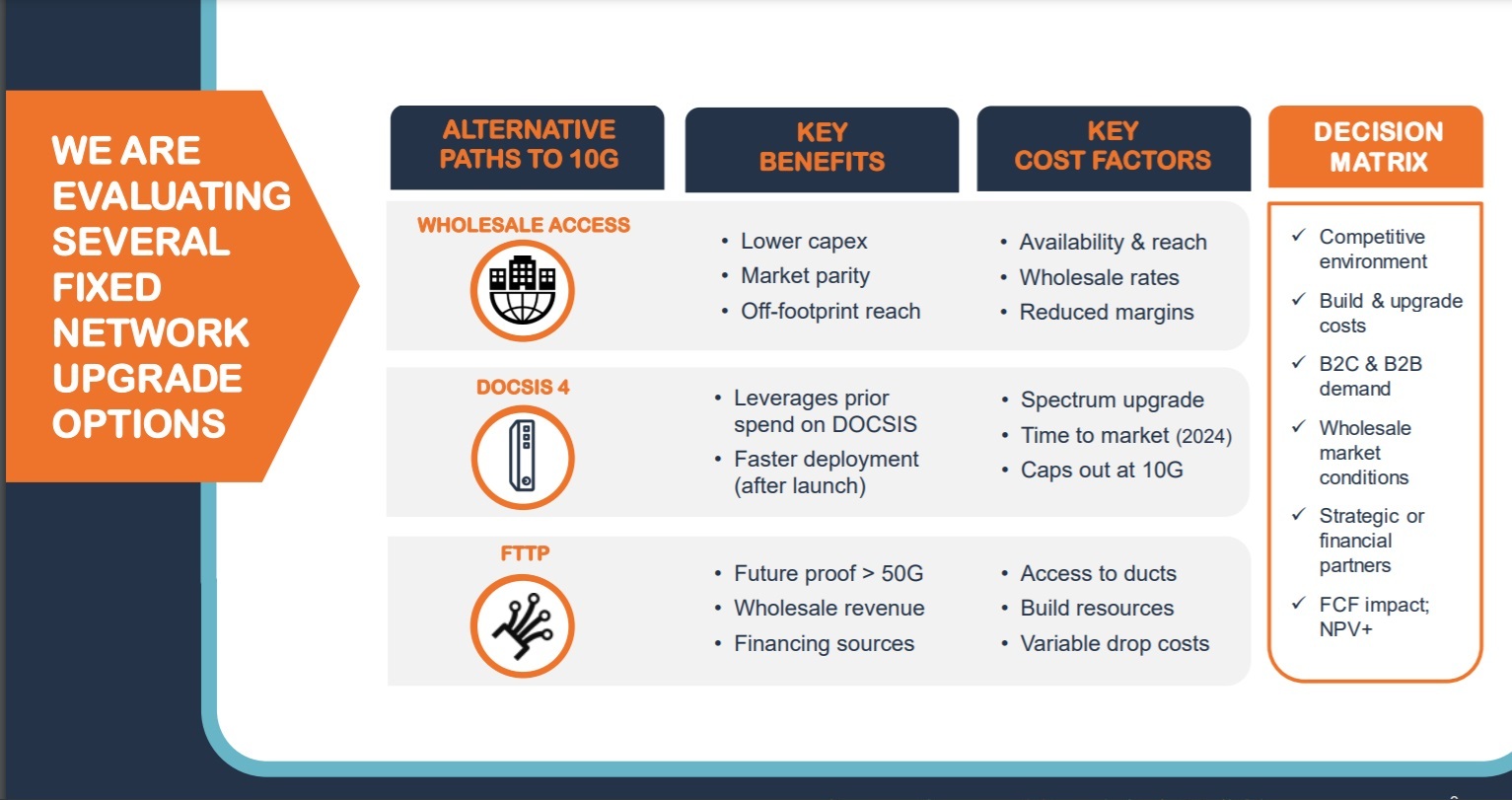 Regarding those options, Fries noted that Sunrise has been successful with its wholesale arrangement with Swisscom. While capex under that approach is lower, the negatives include foregoing owner economics for broadband and being exposed to fluctuating rates in wholesale prices.

DOCSIS 4.0 puts Liberty Global in position for a speedy rollout on its HFC plant, but it requires a sizable one-time investment in active and passive components as new spectrum is added. "Thus, we're not clear when the technology will be available for commercial exploitation, but we are part of a select group of operators working together to accelerate that timetable," Fries said.

As for FTTP, he likes that the technology will give the company a roadmap to future speeds well beyond 10-Gig. Fries lamented that DOCSIS 4.0 has no current roadmap to reach into areas. Cable's engineering community is exploring ways to deliver speeds of 50 Gbit/s or more by expanding the DOCSIS plant to 3GHz, but that work is in its very early days.

"The decision about which path we'll take always comes down to a few key questions. And it's clear to us that we are likely to avail ourselves of all three options across our footprint and to varying degrees by market," Fries said.