SCTE CABLE-TEC EXPO 2021  The future of the cable network tends to focus on symmetrical, multi-gigabit speeds, but anticipating consumer trends and staying several steps ahead of network-related problems are among the other critical areas of focus for the industry, Kevin Hart, executive vice president and chief product and technology officer at Cox Communications, said here.

"The next phase in improving the customer experience is being more predictive and more proactive," Hart said Tuesday during an opening general session for this week's all-virtual SCTE Cable-Tec Expo.

That next phase, in part, means increased adoption of artificial intelligence and machine learning in the network.

"Instead of relying on the customer to call us, we'll know about the anomaly and resolve it before the customer experiences a thing," Hart said. "The next step for us at Cox is deploying a proactive, service health-driven model."

Those low-latency capabilities are starting to surface as suppliers such as CommScope bring to bear product ecosystems that support new Low Latency DOCSIS (LLD) specifications. 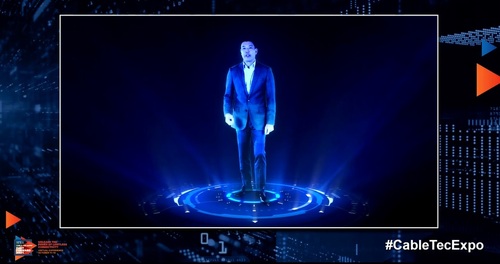 Charter's Andrew Ip presented in the form of a hologram to help illustrate the kind of applications that will require the speeds and low latencies supported by the cable industry's wide-ranging '10G' initiative.
(Image source: SCTE Cable-Tec Expo)

LLD is taking the industry on a path to broadband services that extend well beyond raw speeds and into an area that some are starting to refer to as "slicing for DOCSIS," Andrew IP, senior vice president of emerging technology and innovation at Charter Communications, said in a presentation that likewise focused on the future direction of the broadband network.

In a follow-up keynote discussion with CableLabs President and CEO Phil McKinney, Zoom founder and CEO Eric Yuan said the delivery of lower latencies and higher data capacities by network operators will be critical to the future direction of his company.

Although Zoom became an important tool for people who were forced to work and school from home during the pandemic, Yuan believes that faster connections and lower latencies will enable his company to explore areas such as telehealth and the integration of augmented and virtual reality applications.

While the original goal of Zoom was to be a killer app for video conferencing, Yuan said he expects Zoom to transform its business in coming years into a "platform company" that's driven by a video-centric interface.