WiCipedia: Gender Editors, Twitter Reform & How to Be Decent

This week in our WiCipedia roundup: The New York Times creates a new diversity position; Instagram's COO advises 'get your foot in the door'; sexism scandals rile Hollywood and Sacramento; and more.

Interested in joining Women in Comms on our mission to champion change, empower women and redress the gender imbalance in the comms industry? Visit WiC online and get in touch to learn more about how you can become a member!
Marne Levine & Girls Who Code at Instagram HQ 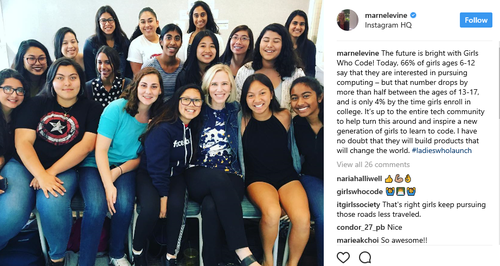 We highly encourage everyone to read the full article here. (See Hey Men of Silicon Valley, Stop Being Creepy!)

Like what we have to say? Click here to sign up to our daily newsletter
COMMENTS
Newest First | Oldest First | Threaded View
Add Comment
Be the first to post a comment regarding this story.
EDUCATIONAL RESOURCES
sponsor supplied content
Migrating OSS to the Public Cloud: Why, How, and When
The urgent need for federated inventory
Why zero-touch, end-to-end network & service orchestration is a must
See how digital transformation is changing the communications industry
eBook > Master the unexpected with Nokia FP5: The power of network processor innovation
Application note > Nokia FP5 silicon innovation: The new route to remarkable in IP networking
Application note > ANYsec universal line-rate encryption for service providers
5G for the Internet of Things: Connecting Everything, Everywhere
Educational Resources Archive
More Blogs from WiCipedia
WiCipedia: When sexism goes to trial