More than 107,000 jobs have been cut during the past two fiscal years across 20 major telcos tracked by Light Reading, a figure that equals 6% of total jobs at those companies before the period in question.

The headcount reductions, which took place at the 20 biggest telecom operators by revenues with headquarters in North America or western Europe, are the troubling result of telco efforts to boost efficiency through automation, merger activity and other cost-saving measures.

With the publication of Vodafone's annual report earlier this month, Light Reading has been able to calculate headcount reductions totaling 44,192 in the past fiscal year across the 20 companies it monitors. Those cuts follow a net loss of 63,344 jobs in the previous year. (See Vodafone Rewards Top Brass as Thousands of Staff Are Axed.)

Overall staff numbers topped 1.8 million at those 20 companies between late 2015 and early 2016, with some operators reporting annual results based on the calendar year and others to the end of March. 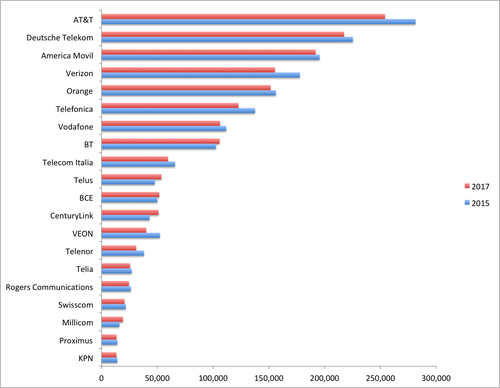 Much of the attrition during the past year was the result of takeover activity in the sector. Last year, AT&T Inc. (NYSE: T) was still shedding staff following its $48.5 billion acquisition of DirecTV, a pay-TV provider, in 2015. The US telecom giant accounts for as many as 14,540 of the industry jobs that vanished in the most recent fiscal year.

Some operators in our Top 20 list, it is worth noting, have reported lower employee figures not because they have axed staff but because they have sold certain operations and transferred employees to other companies. Telenor Group (Nasdaq: TELN) sold an Indian subsidiary with about 4,000 employees to Bharti Airtel, for example. And Vodafone Group plc (NYSE: VOD) merged a Dutch unit that had more than 3,000 employees with a cable company owned by Liberty Global. (See Indian M&A: And Then There Were 5? and Vodafone, Liberty Global Form Dutch JV.)

Those staff, of course, might then be subject to job cuts -- such reductions, though would not show up in our analysis.

But there is an approaching wave of sector consolidation that is likely to impact the headcount statistics of our Top 20 operators.

Pending regulatory approval, the industry could soon witness a Vodafone takeover of Liberty Global Inc. (Nasdaq: LBTY) assets in Germany and other European countries, as well as a merger between Sprint Corp. (NYSE: S) and the T-Mobile US Inc. business owned by Germany's Deutsche Telekom AG (NYSE: DT). (See Vodafone Pounces on Liberty Cable Assets in 18.4B Deal and T-Mobile & Sprint: Marriage made in hell.)

Vodafone expects to realize annual cost savings of 535 million ($631 million) through a tie-up with Liberty. Deutsche Telekom is targeting $6 billion in annual US savings, starting in 2024, although it insists "the larger company will employ more staff than the previous companies put together." (See Vodafone Pounces on Liberty Cable Assets in 18.4B Deal and T-Mobile, Sprint Combo Could Threaten German Digitization.)

Labor unions are dubious, having previously warned that a US merger could lead to the loss of 20,000 jobs.

Bengt Nordström, CEO of the Northstream consulting business, reckons the Deutsche Telekom statement is designed to overcome political opposition. "It is the wrong time to talk about redundancies but the idea of merging two companies without it resulting in redundancies is quite remote," he told Light Reading during a recent interview. "In theory it should be one network and one organization. You don't need two core network managers."

Merger activity could affect some of the other tracked companies, too.

France's regulatory authority recently suggested it might give up its resistance to any consolidation that would reduce the number of national service providers from four to three. That could potentially open the door for a merger between the French operations of Altice and Iliad, with Orange (NYSE: FTE) or Bouygues picking up some of Altice's European assets to address competition concerns. (See French Telcos Gain on M&A Signals From Policy Wonks.)

Following its recent takeover of Level 3, CenturyLink Inc. (NYSE: CTL) warned that about 2% of jobs would go, impacting about 1,000 employees at the combined companies. Richard Warley, the regional president of CenturyLink for Europe, the Middle East and Africa, thinks consolidation has yet to run its course in CenturyLink's European markets. "We will absolutely continue to look at opportunities as and when they come along," he told Light Reading in May. (See CenturyLink May Jump Into Europe's Merger Mania.)

(The disappearance of Level 3 as a standalone business means that, in its place, Belgium's Proximus has been included in Light Reading's assessment.)

Next page: The automation specter

Phil_Britt 6/22/2018 | 9:05:21 AM
Re: Trend Will Continue The broader economy in general, at least in the U.S. continues to have a wider divide between the haves and have-nots with fewer in the middle. According to a recent report, the middle class has been dwindling since the 1970s. Of course, telecom is only a small portion of this. But look at telcos, where are the jobs? Many positions that were in companies before are now contracted out.
Reply | Post Message | MESSAGES LIST | START A BOARD

kq4ym 6/22/2018 | 8:52:59 AM
Re: Trend Will Continue That's probably true, the job loss has been ongoing for a long time. And as noted "Much of the attrition during the past year was the result of takeover activity ," but one might wonder what the net loss might be and how disruption of employment affects employees and the broader economy in general and where do the savings in employee costs of the corpoarations end up.
Reply | Post Message | MESSAGES LIST | START A BOARD

iainmorris 6/15/2018 | 11:09:46 AM
Re: Only service providers That is good point. Some analysis of staffing developments in the vendor community would also be interesting.

The plan is to keep this going and build up the base of operators that being monitored.
Reply | Post Message | MESSAGES LIST | START A BOARD

Thanks very much for the work here. Very helpful and hard to obtain. It shows why Light Reading is the best single source for telecom news.
Reply | Post Message | MESSAGES LIST | START A BOARD

Duh! 6/12/2018 | 1:55:08 PM
Broader than just automation This is a subject which begs for primary research (putting aside the small matter of funding). Industry downsizing has a number of root causes, and nobody  (that I'm aware of) has quantitative insight into how they break down.

My hypothesis is that a chunk of it is typical corporate "make more with less" and meeting the quarterly numbers stuff. Some of it is offshoring and outsourcing and elimination of redundancy.  Some of the operators are lowering their maintence standards for their copper networks by workforce reduction.

For example, somebody recently told me that in a mature FTTH deployment in a mid-sized city, the operator averaged three trouble tickets per week, compared to hundreds in the copper network. But for their labor contracts, that operator isn't going to have dozens of techs sitting around waiting for one of those events.

As another example, improvements in test equipment and integration of test into transmission mean that faults can be diagnosed and precisely localized from the CO. That eliminates labor for troubleshooting and makes field techs more efficient. Again, operators won't hang onto lots of bored techs.
Reply | Post Message | MESSAGES LIST | START A BOARD