All of this is very metaphysical, but it's a rule that AT&T Business Solutions lives by. Simply upgrading the network won't give enterprises a new business model. But enterprises can't implement a new business model without a modern, software-defined, data-powered network to support it. And that's where AT&T Business Solutions comes in -- it helps enterprise customers virtualize their networks, using the skills and lessons AT&T learned over five years virtualizing its own network, Saxena says.

"We realized early on that every CIO's digital transformation has as its foundational layer an intelligent and software-defined network," says the AT&T business boss. 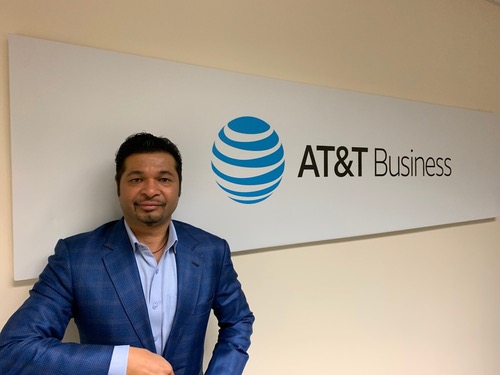 CIOs have three technology priorities: network; infrastructure, including compute and storage; and applications, Saxena says. "All three are turning out to be software defined and data powered." And the network layer provides insights into all three layers, using data and analytics to optimize performance and spot problems.

"Separating hardware and software -- we have learned that from the inside out," Saxena says. The carrier's experience taught it how to manage the complex network environments enterprises face. AT&T virtualized 65% of its core network over the past five years, turning operations to software control, and is on track to meet its goal of virtualizing 75% of the network by next year. The carrier learned from that process, and can apply those lessons for the benefit of AT&T's enterprise customers, Saxena says.

Saxena was hands-on with that transition; as CIO for network and shared services until 15 months ago, he oversaw turning AT&T's virtualization, cloud and SDN into working products, he says.

AT&T's own experience can help enterprises manage both virtual network functions (VNFs) and legacy physical network functions (PNFs), as well as hybrid cloud, Saxena says. "Nobody can do it on the scale we do," he boasts. AT&T operates in 200 countries, with 1.1 million miles of fiber.

Additionally, AT&T leads in SD-WAN global deployments, with 28,000 as of last year, Saxena says. The value of SD-WAN is reducing complexity, bringing four or five pieces of equipment on customer premises down to one, and allowing enterprises to customize access requirements on a per site basis.

AT&T built out Open Networking Automation Platform (ONAP), an open source tool for network deployment, configuration management and policy controls, on its own network, with an implementation AT&T calls ECOMP, and extends those capabilities to customer networks, Saxena says.

Traditionally, telco networks end at the customer demarcation, but by implementing SD-WAN with ECOMP, AT&T can achieve benefits by gaining visibility into the customer's entire network. For example, in one case AT&T discovered that a customer was running port scans at peak time and slowing down its sales application; the enterprise switched to running port scanning late at night and throttling traffic as needed, improving network performance and business results.

Like what we have to say? Click here to sign up to our daily newsletter
COMMENTS
Newest First | Oldest First | Threaded View
Add Comment
Be the first to post a comment regarding this story.
EDUCATIONAL RESOURCES
sponsor supplied content
Why Telcos Need to Embrace a Digital Transformation
Educational Resources Archive
More Blogs from Wagners Ring
Podcast: Don't Call Us an SD-WAN Provider  Cato Networks