Service providers are tasked with supporting ever-growing bandwidth demand. Their key challenge is staying ahead of this demand when the rate of increasing bandwidth exceeds the cycle time to evaluate, procure and deploy network architecture solutions to address this growth in a cost-effective manner. To close this gap, they are turning to disruptive solutions that not only provide increased bandwidth capabilities, but also streamline operational complexities. ACG analysis estimates that IP transport networks can result in a 35% savings in capex and 57% savings in opex over five years compared to traditional router bypass network architecture. For example, BT recently tested a similar architecture on their network.

In modern, high-capacity optical networks, the transport layer is comprised of an optical line system in between dense-wavelength-division-multiplexed (DWDM) coherent optical transmission terminal equipment. These solutions have traditionally been built around closed, proprietary solutions. Higher layer IP switch/router traffic uses this transport layer as the high-bandwidth pipes to connect switch/routers, with short-reach gray optics connections between the switch/router and the DWDM terminals. The two distinct optical transport layer and IP layer results in the partitioning of control plane management.

Momentum is growing to disaggregate the transport layer to migrate to a lower-cost solution while avoiding vendor lock-in. Three developments provide more flexibility in architecting the coherent optical transport layer than ever before. These are the:

The second development was the standardization efforts by Open ROADM and the Optical Internetworking Forum (OIF) to enable interoperability between 400G coherent optical transceivers from different vendors. This eliminated the need for bookending.

The third effort was the emergence of 400G coherent pluggable transceivers that could be plugged directly into client ports of a switch or router. These ports are universal and line optics can be plugged into any port with no compromise to switch capacity and density.

This has led to service providers, such as BT, exploring how to utilize pluggable coherent modules capable of supporting a range of network architectures, while leveraging silicon-based component technology that drives a level of scale that did not exist previously.

Many service providers want to continue leveraging existing optical networks, while taking advantage of the lower power and pay-as-you-grow deployment model offered by pluggable coherent solutions in a book-ended configuration. This deployment model is like how earlier generations of pluggable coherent were widely deployed, particularly in China. Analysts report that approximately 40% of coherent ports deployed worldwide in 2020 at 100G and 200G data rates utilized pluggable form factors. With the new 400G pluggables, service providers will further benefit from improved performance and operational scale.

Some service providers will adopt a more open architecture leveraging the interoperable standards that allow them to interconnect between different equipment vendors. This allows them to introduce new technology at a faster pace, driving capex reductions and providing a broader vendor base that can mitigate supply chain risks.

Others may choose a more significant architectural change that considers how the router costs have declined at a more rapid pace than the optical components, such as amplifiers and wavelength selective switches (WSSs). The WSS nodes would be replaced by routers, meaning the optical signal is regenerated at each node. This creates a hop-by-hop architecture where a higher number of cost and power optimized optics can support high-capacity transmission.

For service providers such as BT looking to deploy an IP over DWDM network architecture, OpenZR+ is an attractive solution because it provides the performance and reach to address wide geographical coverage, while also being able to plug directly into a switch/router.

Another advantage of OpenZR+ is that it includes client multiplexing and the ability to adjust the modulation and baud rate. This makes it a good choice to cover metro and regional deployments. OpenZR+ also allows for supplier interoperability, enabling service providers to maintain supply chain diversity.

Module suppliers introduced 400G pluggable solutions that support 400ZR, OpenZR+, and Open ROADM. The 400ZR and OpenZR+ solutions are based on the QSFP-DD form-factor, while the 400G Open ROADM solution is housed in the CFP2 form-factor. 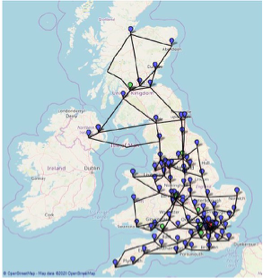 Mobilise CEO says the new iPhone will signal the end of SIM cards.