Broadcom Helps Out With a Key 100G Part

News Analysis Craig Matsumoto, Editor-in-Chief, Light Reading 3/21/2013
ANAHEIM, Calif. -- OFC/NFOEC -- Broadcom Corp. contributed some key circuitry to the new coherent DSP from NTT Electronics Corp. (NEL), the companies announced here Wednesday. The DSP is a key component for 100Gbit/s coherent interfaces, and NEL is so far the only merchant source for it. So, Broadcom has tacked its name onto what, for now, is a high-profile device in telecom. The original NEL DSP was created with the help of what's flippantly called Japan Inc. -- meaning, a few Japanese companies contributed to the work, with some funding from the Japanese government. The second generation still uses a DSP core from NEL, adding pieces from Broadcom -- namely, an analog-to-digital converter and a digital-to-analog converter. Broadcom developed them with help from NEL and other Japan Inc. members, says Lorenzo Longo, vice president of Broadcom's high-speed interconnect group. The result is a chip that uses 50 percent of the power of the original, Longo says. The power reduction came partly from the usual refinement that comes with a second-generation device, but it's also due to an advanced manufacturing process that Broadcom used for its pieces. Broadcom isn't disclosing what that process was -- which is weird. Normally, a chip company is thrilled to say the chip is built on geometries 40nm or 28nm or whatever. 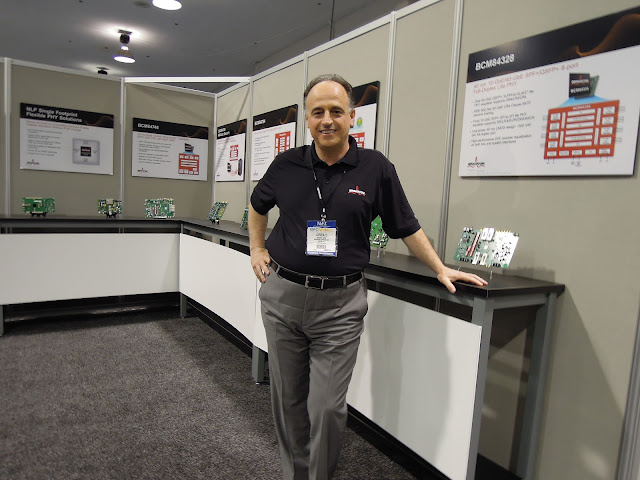 Lorenzo Longo poses with Broadcom's latest and greatest. Not the NEL part,
but these other things are very nice, too, we're sure.
The second-generation NEL part is a sign that coherent 100Gbit/s transponders and tranceivers are on the way to becoming merchant parts. An ecosystem of components has to build up first -- and that will mean more chip vendors producing these DSPs. ClariPhy looks like a probable candidate to get the second one onto the market. Broadcom got this gig by producing a chip for the transmitter side of 100Gbit/s. It's the BCM84128 mux/demux, which it was announced at OFC/NFOEC this week. That chip's early customers included some Japanese equipment vendors. "They liked what they saw, and that discussion kind of rolled into this DSP discussion," Longo says. For more Keep up with all our OFC/NFOEC coverage at http://www.lightreading.com/ofc-nfoec. — Craig Matsumoto, Managing Editor, Light Reading