Verizon is looking to cut expenses in the billions as it deals with profitability headwinds, but its wired and fixed wireless access (FWA) broadband business continued to make gains in the third quarter of 2022.

FWA remained the fastest-growing piece of that business, as Verizon added enough consumer and business customers to the offer to take its total past 1 million. By way of comparison, T-Mobile has signed up more than 1.5 million FWA subs so far. 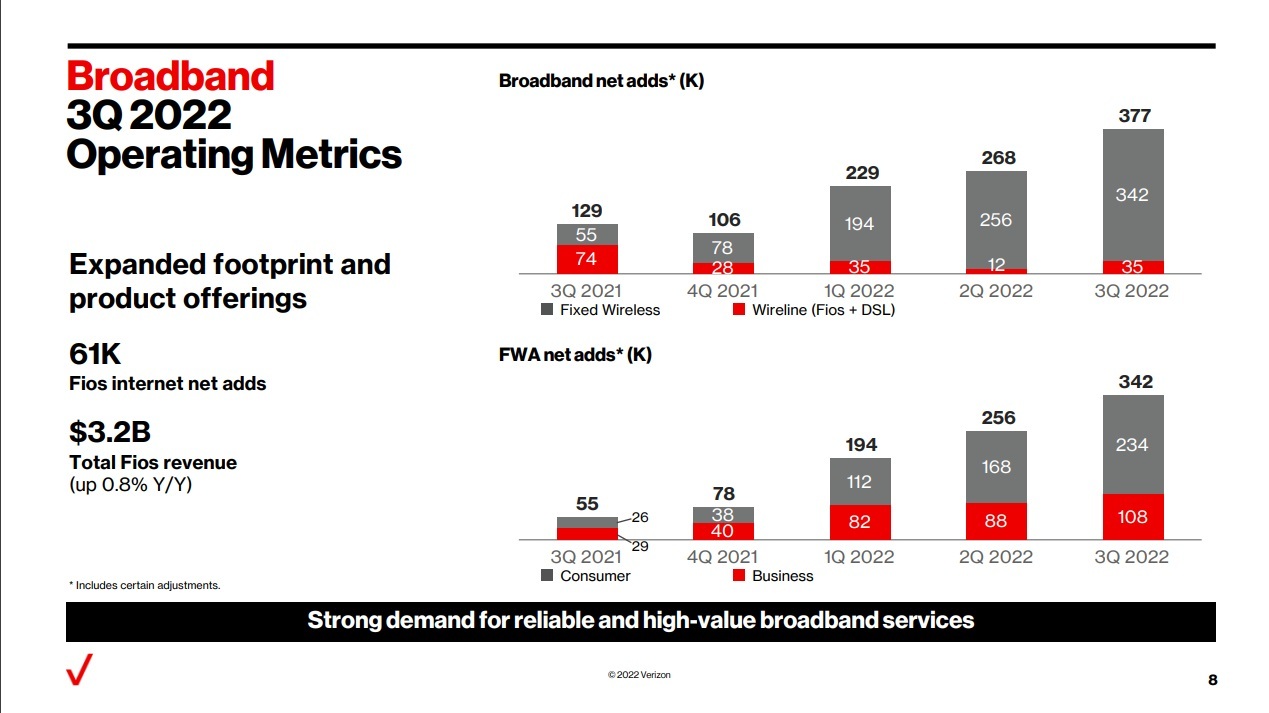 With both sides rolled together, Verizon added 342,000 FWA subs in Q3, ending the period with 1.06 million. That combined gain was just ahead of the gains expected by the analysts at Evercore ISI.

Verizon said its FWA coverage now surpasses 40 million locations nationwide, including 30 million covered by its 5G "Ultra Wideband" network. C-band usage on the Verizon network was up 170% over Q2 2022, but the company did not break out usage on mobile and FWA.

"We will continue to expand on that," Verizon CEO Hans Vestberg said of the company's FWA rollout on today's earnings call.

Verizon's FWA service is being underpinned in part by the rollout of its midband C-band spectrum. The company, which has earmarked about $10 billion for the C-band rollout, expects to provide coverage to about 200 million people by the first quarter of 2023.

The wireline side of Verizon's broadband business isn't growing as fast as FWA – and what growth it is seeing is slowing down. But at least the numbers are still going up.

Verizon CFO Matt Ellis noted that the company was able to gain Fios broadband customers despite low churn levels and a "low move environment." The latter situation, paired with more fiber and FWA competition, has caused broadband subscriber growth to slow among the nation's top cable operators, which start to report out Q3 results next week.

Verizon's Fios Internet gains came in about 10,000 fewer than what the analysts at New Street Research were expecting. However, DSL losses of about 20,000 were about 11,000 lighter than expected.

Verizon added 38,000 total wireline broadband subs in the quarter due in part to DSL losses, ending the period with 6.97 million, up 1.7% year-over-year.

Fios video continued to decline – Verizon shed 95,000 of those in the quarter, widened from -68,000 in the year-ago period. The company ended Q3 with 3.31 million Fios video subs.