Against analysts' expectations, Lumen's business wireline segment experienced a considerable improvement in Q2. However, it wasn't all sunshine for Lumen in Q2, with rising energy and labor costs, inflation and supply chain issues raining down on revenue.

Analysts at MoffettNathanson compare the quarterly performances of Lumen's, AT&T's and Verizon's wireless business segments because they "all face similar long-term secular trends." However, while AT&T and Verizon experienced "poor" business wireline results in Q2, Lumen faired better than anticipated.

"Contrary to our expectations, Lumen bucked the trend, with performance in its business wireline segment noticeably improving rather than deteriorating," said MoffettNathanson. 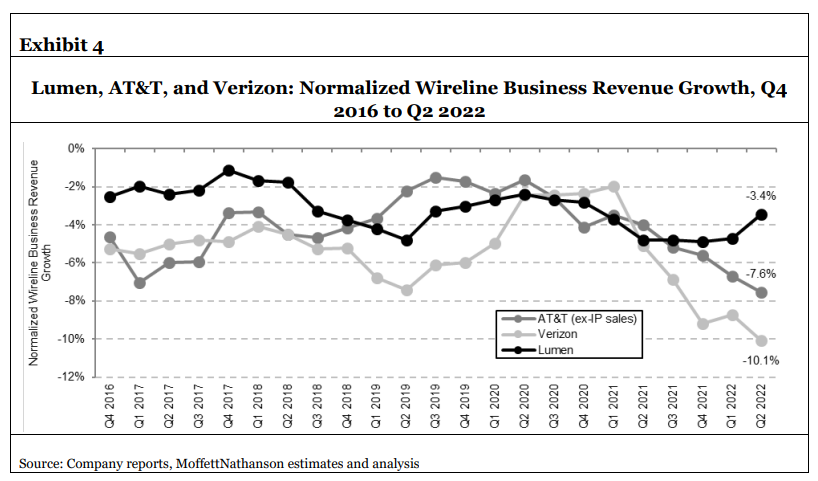 Image included with permission from MoffettNathanson. Click here for a larger version of this image.

Lumen reported that revenue for its business wireline segment declined 3% year-over-year to $3.4 billion.

Lumen struggled in the mass market broadband category, where its revenue declined 14.7% year-over-year to $1.2 billion.

"In Q2, Lumen gained 28K mass markets broadband subscribers in the fiber category and lost 1118K non-fiber subscribers, for a net loss of 90K," wrote MoffettNathanson. "This was meaningfully below consensus expectations of -57K and was the worst combined result in at least five years."

However, the analysts noted that Q2 was difficult "across the board for wireline providers." 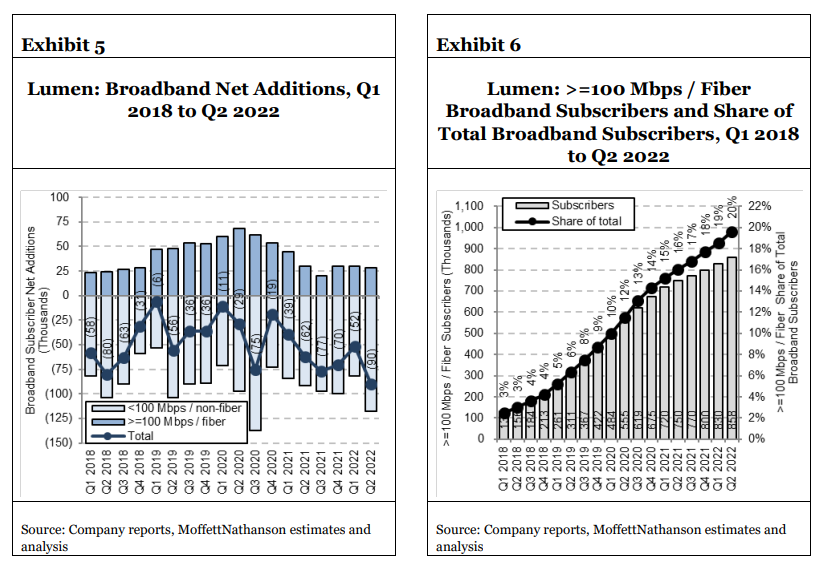 Image included with permission from MoffettNathanson. Click here for a larger version of this image.

Although the FTTH offering has been expanding, the service provider only passes about 11% of its homes with fiber and about 20% of its total broadband subscribers are fiber customers, noted MoffettNathanson.

Lumen also launched a new 8Gbit/s broadband service for its Quantum Fiber subscribers this week to select markets. However, MoffettNathanson analysts predict interest in the service will be minimal due to the high cost and few use cases. The Quantum Fiber 3Gbit/s service is $150 per month versus the new 8 Gbit/s that costs $300 a month.

Quantum Fiber uses XGS-PON technology and the 8Gbit/s service is currently available to some residents and small businesses in cities near Denver, Minneapolis and Seattle, with plans to expand to more areas in the future.

"These multi-gig offers will enable future consumer and small business use cases such as VR, AR, gaming, work and learn from home, ultra-high-definition video streaming and other high-bandwidth services," said CEO Jeffrey Storey in a call with investors this week.

However, Lumen's "late arrival to the fiber upgrade game" and current financial profile could hinder its ability to deploy Quantum Fiber at the rate the service provider has planned, according to MoffettNathanson.

Lumen's Q2 results were also impacted by cost pressures from energy and labor factors, according to management. While Lumen is branching out into revenue streams that could prove lucrative in the future, such as edge computing, MoffettNathanson said legacy services are bogging down the service provider's current revenue.

"We believe Lumen's revenue is laden with legacy services  like voice, DSL and MPLS  that, by virtue of their ongoing declines, should continue to make it challenging for Lumen to achieve consistent, consolidated top-line growth in the coming years."

Lumen's Storey said the service provider is facing the "same macroeconomic pressures as everyone else," including inflation and supply chain issues. The latter has resulted in installation delays, he added.

The service provider also completed the divestment of its Latin America business to investment firm Stonepeak this month. CEO Jeffrey Storey noted that Lumen is "also looking forward to the upcoming close of our ILEC transaction with Apollo" by Q4.

"Combined, these transactions streamline our focus on the most strategic opportunities for Lumen, which we believe will drive significant long-term shareholder value," said Storey.