The number of global wireline operators offering 1-Gig or greater broadband service has jumped in recent years from 45% in 2019 to 60% today. In North America, that figure is up to 88% today from 78% in 2019.

Those findings are courtesy of a recent report from analyst firm Omdia (a sister company to Light Reading). Omdia analysts surveyed more than 760 fixed broadband service providers across 178 geographies to grasp the increase in gigabit offerings, what's behind it and what it means.

About consumer demand, Omdia predicts that 67 million consumers will subscribe to services of 500 Mbit/s or faster by 2026, up from 16 million in 2021. That growth is stemming from more people permanently working from home as well as an increase in online gaming and live streaming.

The growth of gigabit offerings is also being driven by operators' technology upgrades, said Lenderman, with the adoption of passive optical networking (PON) technology expanding dramatically in North America. According to Omdia, PON optical line terminal (OLT) port shipments in North America were 300,000 in 2019, compared to 831,000 in 2021.

Analysts see that trend continuing. "We forecast that OLT port shipments will reach 3 million by 2027. And in 2027, 98% of OLT ports shipped will be [capable of] 10-Gig and higher," said Lenderman.

The third driver behind the 1-Gig global standard is competition, says Omdia. With more service providers advertising 1-Gig, the pressure is on other providers to do the same for fear of losing customers – despite the fact that 1-Gig take-up is still nascent. 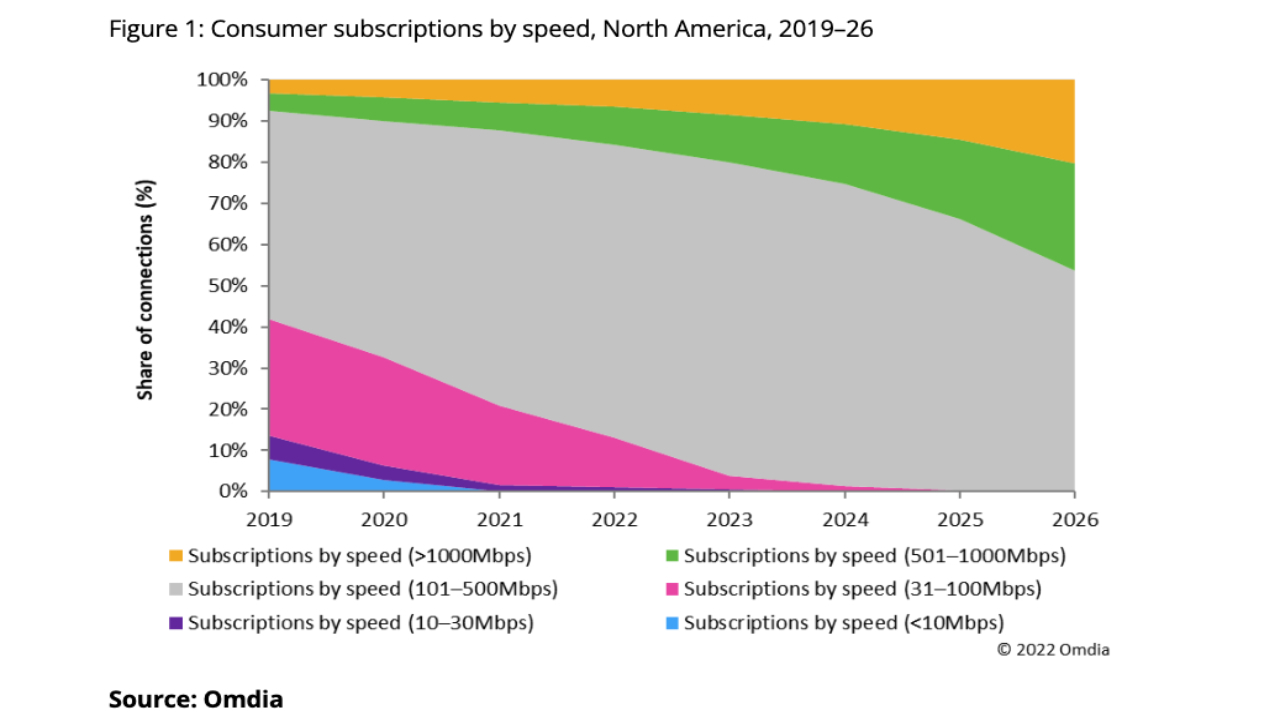 (Source: "How gigabit became the broadband standard," via Omdia.)

"The underlying perception is that if a subscriber perceives a competitor's network as superior, they may choose that service even if their plan is not to take the gigabit service," said Lenderman. "This is especially true with symmetrical services."

Lastly, Lenderman pointed to significant public and private investment into fiber broadband networks as driving the globe – and North America – toward gigabit services.

Various estimates predict record levels of growth in fiber over the next several years. In a 2021 report conducted by RVA for the Fiber Broadband Association, the firm predicted that more fiber will be deployed in the next five years than has been built to date.

Another recent report from Research and Markets estimates that over $125 billion will go into fiber-to-the-home (FTTH) growth between 2022 and 2026 in North America alone. And in the US, a $65 billion commitment to close the digital divide has prioritized fiber as the "gold standard" for future-proof networks.

Those record-level investments in building out fiber will accelerate the growth of gigabit offerings, says Omdia.

"While closing the digital divide is not driving many gigabit offerings at this time, it is making many last miles less cost prohibitive, and therefore gigabit services will be able to be offered at a later time," said Lenderman.