Three UK is to axe most jobs in its technology and operations departments as part of an ambitious digital makeover that will give Microsoft Azure responsibility for looking after IT systems currently managed in-house.

The plans, announced at a briefing in London earlier today, will claim between 700 and 800 jobs, leaving Three, the smallest of the UK's mobile network operators, with a technology and operations workforce of between 400 and 500 employees.

Including staff on the retail side, Three currently employs around 5,400 people in the UK, implying there will be a headcount reduction of up to 15% under the plans revealed today.

While the focus of the latest update was on technology and operations, Dave Dyson, Three's CEO, acknowledged that digital transformation might also claim roles in other parts of the business. 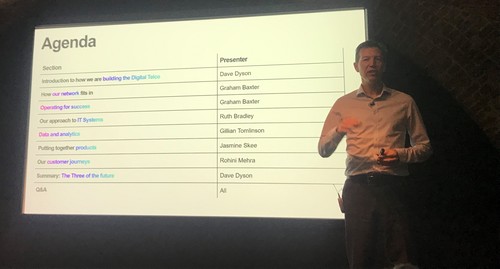 Dave Dyson, Three UK's CEO, updates analysts and reporters on the company's IT transformation program at a venue in central London earlier today.

"Across the broader organization there will be opportunities for automation and outsourcing and we are going through a process to see what capabilities we'll need to differentiate ourselves and what we don't need," he told analysts and reporters.

Facing tough competition from BT (EE), O2, Vodafone and a host of mobile virtual network operators that rely on their networks, Three is trying to reinvent itself as a much sleeker and more digital business, using the Silicon Valley tech giants as a blueprint.

The operator is partway through a swap-out of IT systems that will eventually cut IT costs by one third, said Dyson. He estimates that IT currently accounts for about one tenth of Three's total cost base.

Data shared with analysts shows IT costs have nearly doubled since 2016 because Three has been forced to maintain its ageing systems while it invests in new ones.

But most of the IT overhaul is now completed after several years of automating processes and shifting IT infrastructure and applications into a public cloud environment hosted by Microsoft Azure, an evolution that has also included the deployment of virtualized core network functions and cloud-based OSS systems from the likes of Nokia, MYCOM OSI and Astellia (now part of EXFO).

Three has also been investing in new business support systems (BSS) based on technology from Salesforce, Vlocity and Matrixx Software.

"Microsoft is our cloud partner and they use the cloud to evolve their own tech and massively improve performance and that increases our throughput and reduces our costs," said Ruth Bradley, Three's IT transformation director. "We can't do this as quickly ourselves so partnering with cloud companies is a good thing to do."

The next stage will be to move customers over to the new platforms before switching off the legacy systems. "By the end of the year, all pay-as-you-go customers will be on the new system and then we can start to decommission the old system," said Dyson. "We'll progressively introduce it for contract customers starting in the fourth quarter."

Those details suggest staff cuts could occur mainly next year, although Dyson did not provide a timeframe for the headcount reduction.

"Once they migrate their customers to the new platforms they can retire the legacy and enjoy a 30% reduction in IT costs compared to the pre-transformation 2016 level," said James Crawshaw, a senior analyst with Heavy Reading, an analyst firm and sister company to Light Reading. "Those savings come primarily from a reduction in IT infrastructure headcount, as Three UK uses Microsoft's public cloud for the bulk of its new IT, and operations, as they increase the level of automation in areas such as software development and testing."

IT costs will not fall as sharply as staff numbers because of increased payments to Microsoft Azure and cloud partners for managing and hosting IT systems, Crawshaw explains.

Three has also indicated that most of its technology and operations staff will in future be focused on services development and maintenance rather than infrastructure and operations.

Three says it will look at retraining staff to ensure they have the data analytics skills needed in future. Last week it launched apprenticeship programs for data scientists and analytics specialists, said Gillian Tomlinson, who joined Three in January as the director of data and analytics.

"It is not just about hiring very expensive data scientists, who are generally elusive, but about transforming the skillsets of existing people," she said. "The best people we can upskill are those with knowledge of the telco industry already."

The company believes its digital makeover will not only reduce costs but also lead to new service opportunities. Those could entail making swift improvements to mobile offers -- and allowing customers to upgrade and change tariffs with greater ease -- as well as a potential move into some non-connectivity markets, such as insurance, said Dyson.

"The new IT promises to make the business more agile so, for example, tariff changes can be made in less than a day with no involvement from IT -- that compares with two-to-three-month lead times in the past," says Crawshaw. "And it will enable Three to engage with its customers in a more millennial-friendly manner -- for example through easier self-service through its mobile app for prepay balance top-ups."

If Three can make a success of these plans, its transformation program might even become a template for other telcos to follow, he said.