I'm on the phone with John Chambers, talking about his new venture fund, JC2 Ventures, and he's telling me that America's innovation engine has stalled.

And, being John Chambers, he has the numbers to prove it:

That's a big problem. In the next ten to 15 years, automation technology will cause a huge wave of unemployment to sweep across the US. To generate the 30 million new jobs that the US will need to replace the ones that will disappear, the annual IPO number needs to be 400 annually, reckons the former Cisco CEO.

Chambers isn't just talking about this problem -- he's launched a company to help fix it.

On the surface, JC2 Ventures may look like just another venture firm. It's not, for three reasons.

First, the goal of most venture companies is to make money -- pure and simple. JC2's goal is to generate a return while also creating as many viable jobs as possible by helping as many disruptive digital companies as possible to achieve an IPO (to the extent that Chambers is precluding his investments from M&A exits, where jobs are typically lost, not created).

Second, JC2 isn't just picking its investment companies at random. Almost all of the investments JC2 is making can be inter-leaved to deliver larger and more complex integrated solutions that enable the portfolio companies, under Chambers' guidance, to jointly bid on much larger deals from much larger companies.

Third, JC2 is also structured using an innovative business structure -- leveraging cloud, automation, freelance economy and so on -- that minimizes the number of full-time staff (and costs) while allowing the business to laser-focus on a strategic mission. This is not just a model for VC firms, but for how all companies should be structured in the 21st Century.

Chambers has started his venture term with his son and namesake, John J. Chambers -- hence the name JC2. No nepotism here, however: Prior to joining JC senior in business, John J. had a thriving career of his own, leading digital marketing teams at Houzz, Netflix and Walmart eCommerce. Chambers senior's long-term collaborator at Cisco, the excellent Shannon Pina, is also involved.

It's pretty obvious, even at this early stage, that JC2 will be a transformative business. Whether it becomes a model for other companies in the US, and helps to unstop the innovation impasse, depends not on whether the ability of US businesses to innovate is broken -- there's no question that it is -- but whether the US, as a nation, has the courage to follow JC2's lead and make the necessary changes to fix it.

So what can Chambers senior, pictured below, share with the wider world? Check out the transcript of our conversation below for an invaluable insight into the current state of business and innovation. 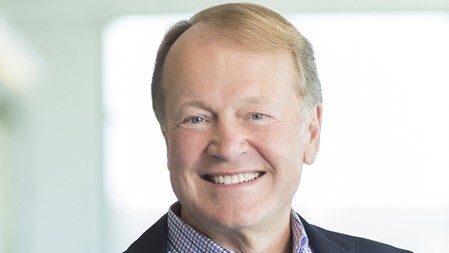 Steve Saunders: So, John, what are you up to with JC2?

SS: Tell me about your end goal with this new business.

JC: In the big picture, I've always talked about a billion-dollar company with a handful of employees. So that's the goal. More important than the dollars are job creation, which I really worry about in this country and around the world.

SS: Me too. I'm very focused on where the jobs are going to be for our children in 20 years' time, because it seems to be that the logical end of this race to global automation is a world where half of today's jobs disappear. First of all, let me ask you, is automation a big focus for your new business?

SS: What are the ramifications of unchecked automation?

JC: Starting with the big picture: 40%-plus of large companies will disappear in the next decade, and I mean disappear. They'll get Amazon'd, or Uber'd -- 30-50% of jobs as we know them today will disappear. The CEOs know this. So, this is a time where you disrupt or get disrupted. We have to create a new set of jobs for our children and their families. My belief is that these jobs will come entirely from startups, and small businesses getting bigger. The problem is that the innovation engine in the US is broken. We're kidding ourselves if we think of ourselves as a startup nation still. We no longer are.

SS: Agreed. Where did we lose our way?

JC: I think America can still be the place to innovate, but it's not something we're entitled to. We have to do it not just in Silicon Valley, or Texas, or New York, but across the whole country -- all 50 states -- and we need programs to do that. I'm the product of Boston 128 [Route 128, aka Boston's Technology Corridor]. Back then we were the hot tech center of the world. Fast forward to 25 years later and it's gone. It still has biotech, but none of the IT players are there. The same thing could happen not only to Silicon Valley, but to the entire country.

You've seen the numbers. If IPOs are the lead indicator for job creation, we're at a 40-year low. To generate the 25 to 30 million new jobs we'll need in the next decade, we need to have maybe five times as many IPOs.

We need to get our confidence back, but we also need to do what other countries are doing, starting with eliminating entitlement. France has become the startup and innovation nation of Europe. India is the startup nation of Asia, and is going to be the fastest growing GDP in the world, and the fastest growing in Asia; much faster than China. You either disrupt or get left behind. The US needs to go back to becoming a startup nation again.

SS: What are those countries doing right? Is it culture? Governmental involvement? What's lit the fuse on innovation in France and in India, for example?

JC: Great question, because culture isn't the answer. What lit the fuse was the combination of two very charismatic leaders who are very good, who are fearless, but also were elected by countries with an appetite for change. Their populations were ready to create a next-generation France, a next-generation India. In India it starts with [Narendra] Modi [Prime Minister of India] outlining a digital agenda for India. I'm the chair of the US-India Strategic Partnership Forum, so I'm very close to him, and I've been hugely committed to his agenda from the start. He is the real thing. His goods and services tax, which he got criticized for, is a brilliant move. He was utterly fearless in doing what's right for his country, long term, as opposed to taking a political out and making much slower progress. [Emmanuel] Macron, [President of] France -- amazing. His vision is as good as you've heard. A good man. I just had the honor of being the first global French high-tech ambassador ever named, and travelling with him to India. It was kind of a dream come true, where I got to travel and collaborate with the two leaders I admire most in the world.

Look at how quickly India and France have moved to change the tax policy. We took 15 years to make our tax changes. India and France took less than a year. It's resulted in the startup engines being on fire in both countries. They aren't saying there's any entitlement. They're saying, "We have to disrupt ourselves." And they have the courage to do it. In France alone, the number of high-tech startups went from 120 a year in 2012 to 720 last year.

JC: This isn't a win-lose between countries, but it is a race about disrupting yourself. What I'm trying to do is be a champion of that on a global basis, but especially in three countries -- France, India and the US. I want us to lead by example. What we're doing with JC2 is focus on the disruptors  and how you take small startups and scale them with tremendous speed. I'm sure some will crash and burn, although right now they're all going well. I'm asking them to go public, not to sell to others, because while I was a tremendous recipient of 180 companies being acquired by Cisco, you don't create a lot of jobs when a company gets acquired. I would like to see us become the startup nation again in terms of IPOs that scale. I think it's important that we create the opportunity for these small companies to challenge the big incumbents.

Next page: Getting to the good stuff

Joe Stanganelli 5/31/2018 | 10:37:43 PM
Re: Automation @Gabriel: I dunno... Here in the US, I've actually looked up data on how tax dollars are spent and what percentage goes to what programs -- to say nothing of Senator Tom Coburn's highlights report of wasteful programs every year. It's pretty galling.
Reply | Post Message | MESSAGES LIST | START A BOARD

mendyk 5/31/2018 | 10:49:57 AM
Re: Automation Judging from the bright minds that I know (yes, hard to believe that I know any) that are entering their college years, the focus is on ... becoming rich. The aspirational role models are the "disrupters" rather than the innovators. It's more than a little depressing looking at it from a distance, but I can't imagine how soul crushing it is for the young ones who buy into this worldview.
Reply | Post Message | MESSAGES LIST | START A BOARD

We have something similar for our local taxes here in London. They send out a letter with a pie chart showing this much was spent on social services (child protection, care homes, etc.), this much on libraries, this much on traffic wardens, this much on street cleaning, etc. When it's set out like that, paying taxes is less galling. You could call it a privilege even.

I'm a bit skeptical this can work at a national level -- there are presumably reasons why things are opaque. Large numbers and large bureaucracies make it harder to know what's going on.
Reply | Post Message | MESSAGES LIST | START A BOARD

Steve Saunders 5/30/2018 | 10:46:30 PM
Re: Automation Agree. Which brings us to the other half of the problem (and Johns other big point) ... the lack of innovative and entrepreneurial behaviors in American tech. Where is the leadership, in politics, in government? The US is in a shocking state under the veneer of economic stability.
Reply | Post Message | MESSAGES LIST | START A BOARD

I've gotten to the point that I'm tired of eyerolling every time someone kvetches about the loss of jobs. As long as we don't go and hurry up to build a damn robot-ruled dystopia, we'll be fine as businesses -- and the job market -- evolves.