NICE -- Digital Transformation World -- When arriving at the conference, one of the first things you see is Tareq Amin. The chief technology officer of Rakuten Mobile beams down from a giant poster that hangs precipitously over the entrance hall, looking as unencumbered by legacy as the mobile network he is building in Japan.

As the man charged with developing what could be the industry's first truly cloud-native network, Amin has acquired something like rock-star status right now. Vendors want to be seen with him. Other CTOs want to be him. Some are quietly dismissive, suggesting any "greenfield" operator without a shedload of creaky technologies could do the same. A few market watchers are downright skeptical of Rakuten's claim it can build a mobile network at a small fraction of the normal cost.

Amin is eager to dispel a few myths about his business and the broader market. The first is the notion that any infrastructure built on Internet principles will be less resilient than a so-called "carrier-grade" network. "I guarantee you that some web-scalers have better resiliency," he said at a closed-door session, to which Light Reading was able to get access, at this week's Nice event. "Netflix does 1,000 software updates a day and I can't recall the last time my service was interrupted. Try to do that in telecom and it is not possible, because operators think they need carrier-grade." 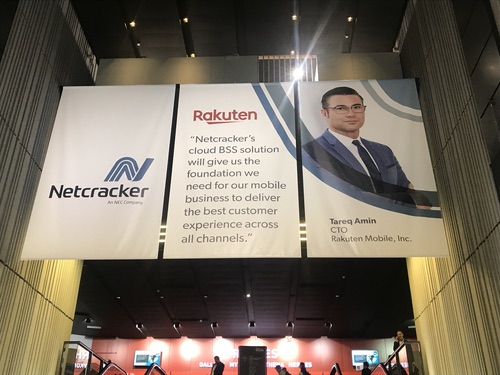 Operators except Rakuten, that is. The Japanese company, which runs a huge ecommerce business, has hired a small army of equipment vendors, IT companies, systems integrators and startups to build something that resembles Netflix more than it does KDDI, NTT DoCoMo or SoftBank, the existing mobile networks in Japan.

The first thing that's out is any "tightly coupled" hardware and software. All Rakuten's hardware is standardized, off-the-shelf equipment, and this "decoupling" makes it far more reliable than legacy gear, says Amin, despite what the industry might think. "If the software code base that is monolithic gets broken into small modules and then run on thousands of servers, it is far more reliable than tightly coupled hardware and software," Amin boasted. "I would argue that cloud native has better reliability than traditional telco architecture."

Hand in hand with this decoupling is a highly automated operation. Amin admits to being gobsmacked when he visited web-scale data centers in Menlo Park and witnessed hundreds of thousands of servers managed by just two or three people. He is taking that operating model into his own cloud-based mobile network. When finished, this will feature about 40,000 4G and 5G basestations across Japan, and yet Amin has capped his entire operations team at just 100 people. "Most telecom operators have an army of people to monitor shelves and cards on proprietary hardware," he said. "My cloud is elastic -- if utilization goes up I can spin up a virtual machine and make sure the automation platform manages that."

The cloudification of the radio access network (RAN) is paramount when it comes to cost. Amin's estimate is that about 60% of all capital expenditure is traditionally spent on installing equipment and electronics in this part of the network. In Rakuten's RAN, each mobile site has been stripped of anything bar a remote radio head from Nokia running software from Altiostar, a startup in which Rakuten now invests. Installing that takes about 15 minutes, compared with the days it usually takes to kit out a mobile site.

Just about everything else has been moved into 4,000 "edge" data centers that feature no maintenance staff. After separating the control plane (the "brains" of the core network system) from the user plane (which does the heavy lifting), Rakuten is terminating user plane workloads in these edge facilities and hosting the control plane at two larger, centralized locations. The same network functions virtualization infrastructure manages the entire network.

All that means huge cost savings, according to Amin. "Our cost for 5G is 50-60% cheaper than traditional telecom networks," he said. On the investment side, he estimates that if a traditional telco were investing about $8.8 billion in 5G, Rakuten would spend just $2.8 billion. Cost efficiency could translate into a big advantage in Japan's crowded mobile market, allowing Rakuten to undercut its rivals on price without damaging profitability.

Not everyone is persuaded. One analyst thinks Rakuten will struggle to avoid making heavy investments in physical infrastructure as it builds its 40,000-site mobile network. Its main advantage over traditional telcos, he reckons, could lie in combining its forthcoming mobile service with its ecommerce and other Internet businesses. Rakuten already serves about 100 million customers with some form of Internet offering.

The model clearly remains unproven and will remain so until Rakuten's commercial launch in October. But Amin attacks any suggestion his job has been made easy by his company's greenfield status. "The easy thing would have been to go the traditional way," he said. "This journey has not been simple because our industry is not disrupting fast enough." Considerable investment has gone toward Rakuten's highly automated network operating system, a platform the company will potentially release into the open source community, according to Amin. "The level of automation we have done is something the industry has not seen," he said.

Another challenge has been vendor selection. Besides Nokia and Altiostar, Rakuten has previously named many suppliers, including Allot, Ciena, Cisco, Innoeye, Intel, Mavenir, Netcracker, OKI, Qualcomm, Quanta, Red Hat, Tech Mahindra and Viavi -- with some playing a bigger role than others. Cisco and Nokia are known to be supplying elements of the core network software, while Intel is providing Xeon processors for use on Quanta servers. When it comes to small cells, Qualcomm is the chipset vendor. And Tech Mahindra has a critical role as Rakuten's systems integrator, stitching together all these disparate technologies.

The key for Amin is finding suppliers with the same "DNA" as Rakuten. "Most vendor choices are based on an emotional connection and asking if they are willing to challenge the status quo," he said. Such thinking drove him toward Netcracker when selecting the operator's B/OSS (business and operational support systems) vendor. "Netcracker didn't have all the right technology but was committed to work on massive internal changes to achieve results," he explained.

His choice of a large and well-established B/OSS vendor makes it harder to sympathize with the grumbling by other telcos about traditional suppliers. Netcracker's mission, according to Amin, was to "understand the context in Japan" and ensure that Rakuten can activate a new customer visiting a store or signing up online in just 15 minutes, rather than the three hours he says it currently takes. "This is our biggest opportunity," said Amin.

Of course, unlike the existing players, Rakuten is not wrestling with old back-office systems that must be maintained even as new ones are introduced. But like any exciting new rock band, Rakuten attracts crowds wherever it turns up. And Amin's message to them is that a bit more effort and confidence in the telecom sector would go a long way. "We did all things in eight months and that shows that when you assemble the right individuals and partners anything is possible," he said. "We don't give ourselves enough credit." If he can provide any kind of blueprint for existing telcos in other parts of the world, they may eventually owe him a debt of gratitude.