Managing lots of multivendor equipment and an array of operating systems has always been a laborious, time-consuming process for network staff. Wouldn't it be great if engineers could tell the network what outcome they desire, and let clever software do all the hard work?

That is increasingly possible, according to Apstra, a Californian startup that claims to have pioneered a concept known as "intent-based networking" (frequently shortened to IBN). With this technology, a technician can theoretically issue a single instruction to a network built from various supplier parts and leave an automated software system to carry out the necessary jobs. For Apstra, the most sophisticated IBN is the ultimate self-driving network. (See Has Intent-Based Networking Moved Beyond Marketing Buzzword Purgatory? and Intent-Based Networking: Marketing Hype or a Magic Bullet for Automation?)

Network teams at major corporations are taking it seriously. Founded in 2014, and in so-called "stealth mode" until 2016, Apstra already boasts "dozens" of customers in the data center market, its main target, including two Fortune 50 companies. This week, it landed its first-ever "campus" deal with Bloomberg Television in London. "It is even talking up the potential to use its technology in edge computing, wide area networking and to support 5G," says James Crawshaw, a senior analyst with the Heavy Reading market research business. "That's a lot of market potential -- way too much for a company with just 80 employees to go after." (See Intent-Based Marketing or Intent-Based Networking?)

If the Bloomberg deal persuades other big companies to send business to Apstra, bulking up should become easier. The startup also benefits from having a highly respected, rich-as-Croesus backer in the shape of David Cheriton, the Stanford University professor famous for being one of Google's first investors. An Apstra spokesperson says all its funding has come from Cheriton, whose net worth is currently estimated at about $6 billion.

But if Apstra came up with IBN, others have jumped on the bandwagon. As awareness of the technology grows, the concern must be that companies will turn to big guns such as Cisco Systems Inc. (Nasdaq: CSCO) and Juniper Networks Inc. (NYSE: JNPR), which already supply much of the data center hardware. Huawei Technologies Co. Ltd is also pitching IBN capabilities as part of its portfolio. (See Juniper Launches 'Bots' for Self-Driving Networks and Cisco's Next Networking Frontier: Intuitive Networks.)

Mansour Karam, Apstra's founder and CEO, shrugs off the challenge. "Lots of software solutions from hardware companies lock customers into their hardware or will only leverage the capabilities of their hardware," he told reporters and analysts at a briefing in London. "From the ground up, we were designed to be vendor-agnostic." 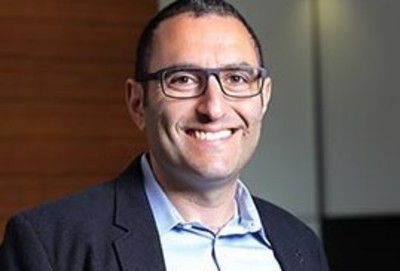 Apstra CEO Mansour Karam: "From the ground up, we were designed to be vendor-agnostic."

Karam also casts aspersions on the extent to which rival offerings are intent-based. Other technologies, he says, are at the bottom end of an IBN taxonomy developed by Apstra. Comparable to the automation rating system used in the car industry, this defines Level 0 as "basic automation" and Level 3 as full "self-operation." At Level 1, an IBN provides what Apstra calls a "single source of truth," meaning one database captures all the information about overlay and underlay network technologies. Level 2 brings "real-time change validation" so that customers can always check if a network is meeting requirements.

Heavy Reading's Crawshaw thinks much of the fighting talk is warranted. "The key value add remains the multivendor support that Apstra brings, which allows data center network managers to more easily manage a network comprising a variety of switch brands," he says. "Apstra has now added Juniper to the list of operating systems it supports as well as the open source project for network routers, SONiC."

The promise of multivendor support seems to have been critical in landing the deal with Bloomberg. The campus in question is the broadcaster's new European headquarters in London, a state-of-the-art facility -- designed very much like a data center -- that today accommodates several thousand employees. "When you think of the scale of Bloomberg, there is more than one vendor in there and you need an operations solution that works across vendors," says Karam.

What benefits can Bloomberg expect? Karam says the broadcaster specifically wanted to be able to predict and prevent any disruptions in real time, and before problems occurred. Using Apstra's software "probes," Bloomberg's own engineers have already been able to check on the network's health and performance and then take preventative action. The sophistication of these probes is what puts Apstra at Level 2 on its IBN taxonomy, say executives. Around 50 are now stored in Github, the developer library acquired by Microsoft, and Apstra is targeting 200 by the end of this year. (See Microsoft Swears GitHub Independence After $7.5B Acquisition.) 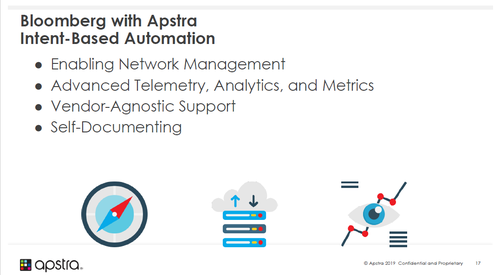 No doubt, Bloomberg will also expect to realize similar benefits to Apstra's existing clients. One has been able to reduce relevant man hours by 83%, says Karam. Yahoo Japan, another landmark customer for the startup, now spends two hours on a task that previously took a week. In another case, Apstra's software pinpointed three switches among hundreds that were "out of compliance" and therefore a potential source of future problems. (See Yahoo Japan Taps Apstra for Network Automation.)

Campus deals with other customers would help to show that Apstra can thrive outside the world of data centers. Bloomberg appears to have based the design of its London headquarters on the "leaf spine" data center architecture that plays to Apstra's strengths, but other facilities may pose a bigger challenge. Cracking the market for wide area networks, with all the attendant complexity, will also be tough.

Yet there may be sufficient opportunity in the data center market alone to support healthy growth at a company of Apstra's size. Market research firm Gartner estimates that 90% of all new data centers are built on leaf-spine principles, to Karam's evident delight. Nascent telco efforts to redesign central offices as data centers will also have grabbed his attention. As frustration with vendor lock-in boils over, Apstra right now seems to be in the right place at the right time. (See DT Preps CORD Effort to Slash FTTB/H Costs and Telefónica Edges Closer to a Distributed Telco Cloud.)