StarHub profits do a double-digit drop

Singapore's StarHub saw its net profits plummet by double digits in the first half of 2021. The company is one of Singapore's three major telcos alongside Singtel and M1.

The operator saw its profits shrink 12.3% to S$67.9 million ($50.1 million), though its cybersecurity division swung S$1 million into the black from making a S$2.1 million ($1.55 million) loss last year. It's a familiar tale for the operator, which has struggled valiantly to supplant falling mobile revenues with new business lines in cybersecurity and data.

A key added factor in this half's dip was the dwindling of the government's Job Support Scheme (JSS), which provided employers with cash during the pandemic to support wages of local employees. With the JSS excluded, the company argued its underlying net profit would have risen 6.6% to S$67.3 million ($49.67 million). In February, it reported a 3.5% fourth-quarter increase in net profits on the back of the JSS payouts.

But in May it saw net profits fall by 24% to S$30.5 million ($22.5 million). So the August dip is of a piece too with its most recent results. In particular, its mobile service revenues dropped by a yearly 15.4% to S$259.8 million ($192 million). Mobile revenues suffered as the pandemic hit roaming revenues as well as prepaid services purchased by tourists and visiting workers. 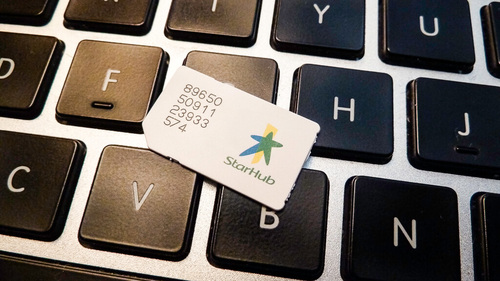 After StarHub bought Strateq last March, enterprise services revenues jumped and they've overtaken the mobile segment entirely. Starhub agreed to pay up to S$82.1 million ($60.6 million) for a 88% stake in the Mayalsian data firm, which had been growing internationally. It's now been consolidated within Starhub's Regional ICT Services unit.

Enterprise services contributed S$333.6 million ($246.2 million) to StarHub's revenues in the first half, which was an increase of 12.9% year-on-year. Meanwhile, broadband is doing well by Starhub, with broadband revenues increasing by a yearly 12.5%. And equipment sales grew 8.8%, as customers upgraded their handsets to 5G models.

StarHub and M1 also announced the two providers were opening a standalone 5G trial, for which users would need a Samsung S21 5G device to participate. The two telcos agreed in January 2020 to submit a joint bid when Singapore auctioned off its licenses for the 3.5GHz spectrum. They have been using Nokia infrastructure.

Meanwhile, Starhub's enterprise business also launched a 5G IoT platform service in February, intended to let customers have a cloud-based dashboard view of different IoT systems. The company also said it was revising downwards its guidance for capital expenditures to 7% to 9% of total revenue (from 9% to 11%), partly due to delays, but partly also because of transitioning to a cloud-based IT model.

StarHub also rebranded its logo after 20 years, plumping instead for a new graphic element it calls "The Portal" and a digital-friendly shade of green. Whether to point to its more successful enterprise activities or obscure the company's persistent lack of overall profits is anyone's guess.