BARCELONA -- MWC19 -- Vivo, Telefónica's mobile and fixed-line operation in Brazil, is proving to be something of a frontrunner within the giant telco's group when it comes to Aura, an AI-fuelled, big data-driven customer management platform developed by the Spanish carrier in close collaboration with Microsoft.

Speaking at a Telefónica press event to mark closer strategic ties with Microsoft, Christian Gebara, chairman and CEO of Telefónica Brasil (a.k.a. Vivo), said Aura had handled more than 20 million interactions -- across more than 20 digital customer channels, covering social media, call centers and even Vivo retail stores -- since its launch a year ago. According to a Vivo SEC filing, the figure was only a shade over 15 million as of December 31, 2018. Usage growth rate, then, is picking up speed. 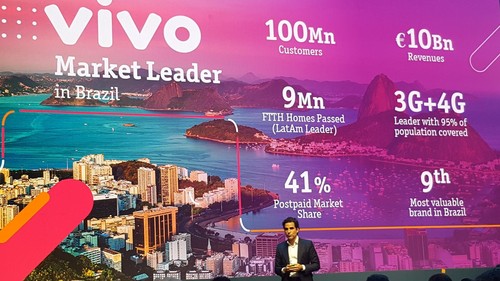 Christian Gebara, chairman and CEO of Telefónica Brasil, a.k.a. Vivo, has more than 100 million customers to keep happy.

Chema Alonso, chief data officer at Telefónica, vouched for Vivo's star qualities. In terms of Aura usage, he said, Brazil was one of the "most developed" in the countries where the operator's so-called cognitive "Fourth Platform" (or 4P) was up and running. Aside from Brazil, Telefónica launched Aura in Argentina, Chile, Germany, Spain and the UK during MWC 2018 a year ago: Colombia, Ecuador and Uruguay are lined up for Aura launches this year. (See Telefónica Takes Aura AI Tool Into 6 Markets.)

One reason why "Aura for Brazil" is proving so popular, perhaps, is that no other operator in the country has anything like it -- at least according to Gebara. "I'd like to think we've built the best platform for big data and AI in the Brazilian market," he said.

Vivo's CEO wheeled out a number of impressive stats that seemed to give testimony to the growing muscle power of AI and machine learning. He said that 22% of customer care interactions from pre-paid subscribers were already answered by Aura, either by voice or text. Of those, he added, there was over a 70% resolution success rate (the times when there is no need to hand the call over to a human). Overall, he said, Aura customer satisfaction rates were a giddy 90%. 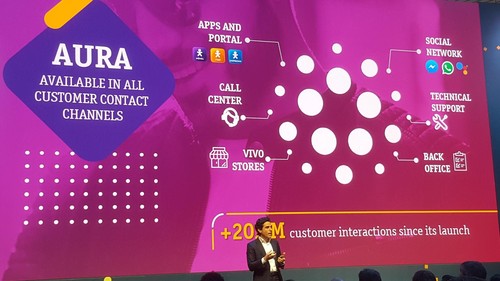 There are some caveats. Vivo, so far, only allows Aura to kick in for the most popular customer requests, such as Internet connection and configuration issues, checking promotions, buying bundles and checking balances. Narrowing Aura "triggers" no doubt skews the resolution success rate upwards, but nonetheless seems a practical tactic in what is still a nascent AI-enabled market.

Encouragingly, "natural language" AI algorithms are dramatically improving. Callers, since they inevitably have different accents and speak differently according to demographics, pose challenging problems for Aura's ability to understand and deal with a customer. Vivo, however, introduced a Bots Training Center last year, in which human linguistic experts assess whether Aura responses really clarify customers' questions. They then input feedback in order to expand the Aura library of linguistic knowledge. Subsequent improvements in understanding accuracy "consistently" have been impressive, reaching 84% at the end of 2018, up from 75% three months earlier.

Despite the progress, Gebara said it was still early days for Aura and that the AI journey ahead was still a long one.