BARCELONA -- MWC19 -- Telefónica signaled its intention to break new services and customer support ground today with the announcement of a strategic partnership with Microsoft, the cloud and software giant with which it has been working closely on its digital developments for the past few years.

And in doing so it reminded the rest of the industry of the route all operators must take if they're to benefit from -- and survive -- the 5G era.

The expanded partnership revolves around: the further development of Telefónica's AI-based customer services platform, Aura; the development of AI-enabled home-based services for consumers, enabling those customers to interact with their devices using multiple sense (voice, touch, sight); and pinpointing ways that Microsoft's cloud and AI technology can be used in the further evolution of Telefónica's network to introduce emerging capabilities such as edge computing, blockchain and more. The full details of the expanded relationship are included in a joint press release issued by the companies.

Telefónica has already made great strides in the past couple of years, working with Microsoft's Azure cloud platform and Cognitive Services applications to develop what it calls the Fourth Platform (or 4P) and revamp its customer relations processes and strategy with Aura. (See Telefónica leverages analytics for data-driven operations and Telefónica Takes Aura AI Tool Into 6 Markets.)

With 4P, Telefónica has changed the way it collects, stores, analyzes and uses data, and has now "normalized" the data it holds on 178 million mobile customers. It has also developed 34 standard API families, developed more than 30 new cloud-based solutions, and now performs more than 120 million operations each month using those solutions and the data it has normalized.

Now the operator is looking to not only expand on that platform by developing new in-home services and applications but extend the relationship into its networking layers. "The network of the future will be very different from the network of the past -- it will be softwarized, virtualized and cloudified and be very liquid, with dynamic capacity [management]," noted Telefónica's chairman and CEO, José María Álvarez-Pallete, as he engaged in an overly scripted conversation with Microsoft CEO Satya Nadella. 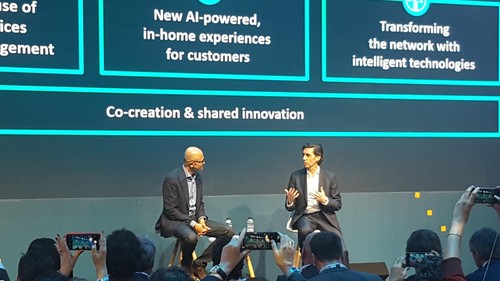 The Microsoft chief, who has engineered a significant turnaround at Microsoft during his tenure, noted that his company was happy and willing to work with the Spanish telco giant because the relationship is about more than just technology development. "It's about how we help partners that have huge customer presences to become digital companies. I call this tech intensity -- we create technology to enable others to create their own technology," stated Nadella.

In a way, Nadella was pointing out the broader importance of the developing relationship, which is that telcos have to embrace and use private and public cloud platforms and find specialist partners that can help them adapt. "Telcos need to transform and they need to partner in many ways to open up new opportunities for new business and revenue streams in the future," noted independent industry analyst Paolo Pescatore.

"But no one knows what the future will be like, which is why the telcos are teaming up with just about anyone they can across multiple verticals and sectors. They simply can't do this on their own," concluded Pescatore.

He also noted how Microsoft's star has risen in the communications sector in the past year, offering a broader and relevant set of tools and services, including its Azure cloud platform, that are relevant to the next-gen strategies of network operators. "AWS has some real competition there," he added.