Will there still be a need for customer service agents in a world of chatbots? Yes, Vodafone insists. "Some calls will always need the human touch," says Neil Blagden, Vodafone UK's director of digital and commercial operations. But the human touch will certainly be less common in future.

That's because Vodafone UK is offering existing customer service agents the opportunity to retrain as coders, under its new "Code Ready" initiative. Starting this month, employees will be able to sign up to a 16-week program and ultimately change career. The obvious subtext is that Vodafone no longer needs so many customer service agents, and that many of those jobs will disappear.

This all stems from the operator's investment in a chatbot called TOBi, which can now handle tasks previously carried out by humans. "He's simple and quick and customers love him," says Blagden, as if TOBi were a flesh-and-blood agent rather than a clever bit of software. "When he joined us last year he was quite basic but he is a quick learner and can now handle 32 end-to-end authenticated customer transactions." (See Chatbot Takes Charge: Vodafone's Customer Services Overhaul.) 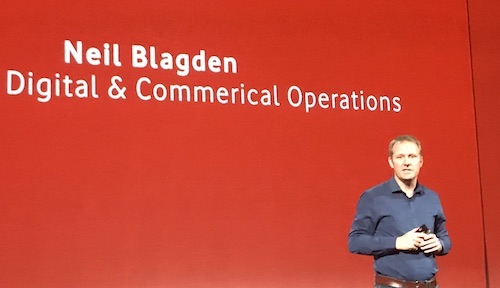 In a process of "TOBification," Vodafone is sticking TOBi in all sorts of new places. He is even venturing abroad, into Vodafone Group plc (NYSE: VOD)'s international subsidiaries, where he seems unlikely to get the red-carpet welcome from customer service agents who don't fancy a career change, or simply aren't up to it.

Coding is not easy, by all accounts, and will certainly not be for everyone. Even if it were, does Vodafone really need hundreds or even thousands of software developers? TOBi was apparently designed by a team of people from a customer services background, which should offer encouragement to agents interested in Code Ready. But that team featured only six people.

The choice is not necessarily between Code Ready and redundancy, however. "There will be two types of agent in future," says Blagden. The type who isn't a coder will have to be a "highly specialized and fully empowered agent who can work end to end," he explains. These agents, then, will probably do a mixture of things: Manage TOBi; address the few remaining types of query that TOBi finds confusing; and deal with customers TOBi has failed to satisfy.

Want to know more about the impact of automation? Check out our dedicated automation content channel here on Light Reading.

But just as Vodafone is unlikely to need an army of coders, it probably won't need legions of "specialized and empowered" agents. "Could TOBi handle all queries? In time, yes," says Blagden. "Do we want him to? The answer is no." In the very worst case scenario, from the perspective of today's customer service agents, this could simply mean that Vodafone retains only a token force of people to reassure customers that robots do not run the show.

Vodafone has been especially cagey when asked what impact automation will have on the workforce (unlike, say, Norway's Telenor and Russia's MTS). Job cuts are certainly not the main aim, a Vodafone Group spokesperson previously told Light Reading. Yet the operator has clearly been slashing jobs, and attributing related cost savings to "efficiency" improvements. The overall number of employees in the UK fell by 859 in the last fiscal year (ending in March), or by 6.5%, to leave Vodafone with 12,379, its annual report shows. (See Sales Squeeze to Drive Heavier Cutbacks at Vodafone, Russia's MTS to Cut 1,000 Jobs as AI, Chatbots Arrive and Downsizing Telenor Pins Margin Hopes on Automation.)

Outside the UK, Nick Read, Vodafone's incoming CEO, has signaled further cuts, too. Around 1,700 jobs across shared service centers in Egypt, India and Romania will disappear in the current fiscal year, according to the Financial Times (subscription required). More functions are being taken over by robots, Read is reported to have said, including customer services. So much for the human touch.