The US tech giants have already infiltrated parts of the telco business, most notably with the launch of "chatbots" that replace customer care assistants and use artificial intelligence (AI) built by the likes of IBM and Microsoft. Now they are entering the systems that operators use to manage operations and serve customers: Days after striking a deal with Telecom Italia, Google has announced a similar contract with Vodafone. More could lie ahead.

Until now, the UK-headquartered operator has been using an on-premises data platform to glean insights about its business in 11 countries. That platform requires 600 servers in eight clusters and relies on Hadoop, a set of open-source software tools. In a sign of rapid change, it is beginning to show cracks as Vodafone's data demands grow. "It shows how fast things move in IT that Vodafone's existing big data platform built on Hadoop is already described as legacy," says James Crawshaw, a senior analyst with Heavy Reading.

The operator has responded by turning to Google Cloud, the US web giant's cloud-computing unit. Together, the companies have used the Google Cloud Platform to build a new custom system called Neuron, which takes advantage of Google's cloud and AI capabilities. They are also shifting all of Vodafone's global data into Google's public cloud, from where numerous data lakes will be brought together into one "data ocean," as the companies describe it, for analytics and business intelligence purposes. "Having built this new data analytics platform on Google Cloud, it makes sense to migrate processes from its existing on-premises servers into the same cloud," says Crawshaw.

All this will make the Neuron platform far more sophisticated and "scalable" than the Hadoop-based system. In an interview with Bloomberg, Johan Wibergh, Vodafone's chief technology officer, said his organization lacked the skills to build Neuron alone. An entirely in-house project would also have been far less cost-effective, he added, although financial details of the contract with Google have not been disclosed. 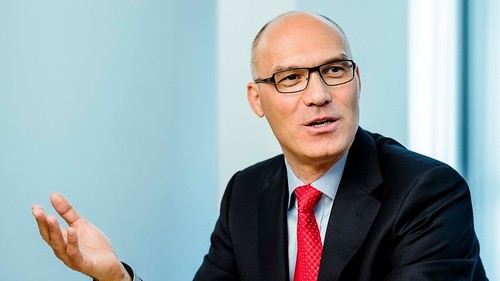 Vodafone CTO Johan Wibergh decided an external partner was needed to build a platform such as Neuron.

Just what will Neuron do, exactly? Simon Harris, Vodafone's head of "big data delivery," sums it up in Google's blog about the latest arrangement. "Neuron serves as the foundation for Vodafone's data ocean and the brains of our business as we transform ourselves into a digital tech company," he said. "Not only will we be able to gain real-time analytics capabilities across Vodafone products and services, it will also allow us to arrive at insights faster, which can then be used to offer more personalized product offerings to customers and to raise the bar on service."

It's strategically important, in other words. In practical terms, it could be used to predict spikes in broadband traffic and allocate capacity accordingly, for instance. With Neuron, Vodafone could also use analytics to better understand customer needs and then personalize services for individual subscribers.

For an operator, these are game-changing developments. From a purely cost and operational perspective, they could be critical with the launch of 5G networks that may eventually support billions of connected devices and new types of service. With sales under pressure, and major network investments on the horizon, cost reduction has become a priority. Vodafone is targeting a net reduction in annual operating expenses of at least 1.2 billion ($1.3 billion) by the 2021 fiscal year.

Wibergh has reportedly denied the Google deal will trigger an immediate sale of data centers, insisting these are still used in other ways, but there's little doubt this move will be a cause for concern among some of Vodafone's IT staff, though it's unclear just what kind of impact this might have on staffing requirements.

Outside the organization, meanwhile, the arrangement seems bound to fuel anxiety about the growing power of US tech giants and the data they oversee. Google's blog downplays this with expressions like "anonymized network data" and "highly secure public cloud," but European operators such as Germany's Deutsche Telekom continue to insist that privacy concerns about US web companies leave a big cloud opportunity for telcos.

Moreover, just as telcos are trying to extend their list of network suppliers, many will not want to become overly reliant on a single cloud. Heavy Reading's Crawshaw reckons Vodafone will look beyond Google. "They will probably also use another cloud platform such as AWS for analytics at the group level, and at the country level I imagine there is even more diversity in their analytics systems," he says.

Despite the capabilities of the US tech giants, some operators are determined to build their own analytics and AI tools. Telekom Austria Group, intriguingly, has already developed an AI platform to support network planning and take guesswork out of decisions about upgrades and maintenance. Operational in several markets, it is poised to enter networks owned by América Móvil, the Latin American telecom giant that controls Telekom Austria. "We see we have developed a platform that can scale," Thomas Hodl, a software architect who worked on the project, told Light Reading.

One factor in that operator's decision to build an in-house platform was some wariness of vendor offerings in the analytics and AI field. "Sometimes they are too 'black box' for us and that is not something telcos appreciate," said Natali Delic, a senior technology executive in Telekom Austria, during a presentation at the recent Telco AI Summit in London. At issue is a shift from so-called "white box" AI technologies, which generate explainable results, to "black box" systems based on more complex and opaque neural networks.

But the US tech giants are now coming in force, and Google is in the vanguard. The Vodafone announcement comes days after Google Cloud struck a major deal with Telecom Italia to provide cloud services and "digital" skills in Italy. "Working with them will speed up cultural change and it will add a number of opportunities," said Luigi Gubitosi, Telecom Italia's CEO, during a phone call with analysts. The question is what it means for the telco business in the long run.

Just wondering if anybody at LR is tracking the COPPA change on Youtube.  COPPA is an old law that does not allow the tracking of children by tech companies.  The impact on Youtube is that they are going to essentially demonitize all content intended for children.  Just thinking outloud...so why does this not apply to "all" internet traffic?  Neither an ISP nor Google can tell my age.  So, how are they sure they are not violating COPPA with their tracking of my traffic.

Apologies, for where this was posted.  Again, has nothing to do with Vodaphone.  Has a lot to do with Big Data (like is it completely illegal in the US).