These are somber days for the Spanish telecom worker employed by Vodafone's local unit. The business has already eliminated nearly 900 jobs from its payroll in the last two years, according to the annual report issued by Vodafone Group. In the latest cost-cutting frenzy, it has now aimed the axe at another 515 heads.

If that many roll, and there are no replacements, the Spanish operator will have ditched more than a quarter of its entire workforce since 2019. The sector has been downsizing for years, but cutting that deeply and quickly is a rarity. If Vodafone did pull it off without hurting sales performance in Spain, it could embolden others to sharpen their blades.

Vodafone's communique on the cuts, of course, euphemistically refers to a "labor reduction plan" (after translation from the original Spanish). The roles it is targeting are mainly in commercial areas, it says, which suggests the layoffs will affect people who work in sales, marketing and customer services  but not those on the technical side.

Still unclear at this stage, however, is the net reduction in headcount Vodafone aims to achieve. Besides generously pruning commercial jobs, it has been recruiting staff for research-and-development roles at a new facility in Malaga. This already employs 600 "highly qualified" people, says Vodafone, and "more profiles will be added in the next 12 months."

The pain in Spain

Vodafone's justification for the redundancies is partly that its Spanish business is struggling commercially. Competition has forced down prices, customers have been drawn to low-cost deals and profitability has suffered.

This is roughly the same argument it made in January 2019 when it warned of job cuts that could affect up to 1,200 employees. The reduction since March that year has been about 75% of that amount. As recently as 2016, though, Vodafone Spain employed 5,935 people. About 1,700 of them have since left.

It is true that revenues and profitability have plummeted in the last few years. In 2018, Vodafone made nearly 5 billion ($5.9 billion) in Spanish sales and more than 1.4 billion ($1.7 billion) in adjusted earnings (before interest, tax, depreciation and amortization). 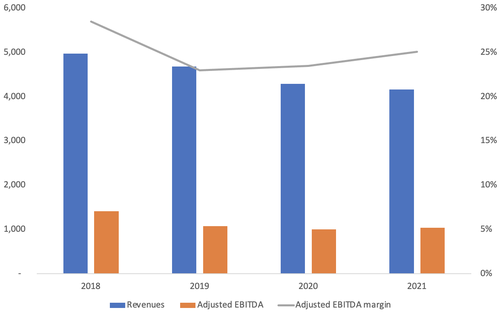 More recently, the performance has been considerably better. Revenues dipped only 3% in the last fiscal year, to about 4.2 billion ($4.9 billion), and earnings rose slightly, to £1.04 billion ($1.22 billion). That meant the company's profit margin improved to about 25%. For the recent first quarter, sales were up nearly 4%, to £1.03 billion ($1.21 billion).

None of this is staying the executioner's hand. Quizzed about the Spanish business during an earnings call in May, Vodafone CEO Nick Read said a merger between Masmovil and Euskaltel, two rivals, would have only "moderate impacts on the marketplace."

Boosting return on capital employed, where Spain appears to lag some other parts of the group, would require government support, more network sharing with competitors and "digital acceleration," Read told analysts.

It is this digital shift that looks set to claim jobs. A growing number of customers buy phones and telecom services online rather than in physical stores  and many have been forced to shop this way by the lockdowns that governments have imposed on their citizens amid the coronavirus pandemic.

For companies like Vodafone, that is an opportunity to close stores and cut jobs without damaging sales. About 26% of sales were carried out online across Germany, Italy, Spain and the UK, said Vodafone in its last annual report.

In the meantime, Vodafone's chatbot seems bound to have had an impact on customer service jobs, although Vodafone has not made the link explicit.

Branded TOBi, this tool uses artificial intelligence to answer the customer queries that would previously have been handled by a human. It was able to resolve 63% of all queries last year "with no human interaction," Vodafone trumpets. Originally it communicated with customers via text messages. After updates, it can now talk to them as well.

TOBi and similar tools have allowed Vodafone to rely more heavily on shared service centers catering to multiple countries. Some 30% of all group employees now work in shared operations, and the figure is likely to increase. Under plans announced in February, Vodafone is overhauling its technology and IT estate so that tools and products are designed for the entire European footprint rather than individual countries.

While the scope of the Spanish cuts is limited to commercial jobs, this technology and IT overhaul has much broader ramifications.

"These are significant changes we are doing on the operating model of the business," said Read in February. "What we are doing is driving greater standardization across network and IT and digital."

Slimming down has become a strategic priority for Vodafone, the only way to pump up profits while sales remain flat. It has managed to cut operating costs in Europe and common functions by 1.3 billion ($1.5 billion) over the last three years, beating a target of 1.2 billion ($1.4 billion). By 2023, it wants the annual bill to be a fifth less than it was in 2018.

Group-wide, Vodafone cut more than 15,000 jobs between 2015 and March this year. But thousands of those have disappeared off its payroll as operating companies have been sold or bundled into joint ventures.

Indeed, after all the divestment activity, overall staff numbers rose nearly 1,300 in Vodafone's last fiscal year. For the TOBi-fearing employees of Spain and other European markets, that will not provide much consolation.