Ericsson, one of the world's largest infrastructure vendors, recently laid out its view of what 6G mobile might do.

Now, some of the world's biggest wireless network operators are joining the 6G discussion, though they're not necessarily on the same page.

Top networking executives from both AT&T and T-Mobile this week participated in the first annual 6G Symposium. The virtual event, jointly hosted by Northeastern University and research and development company InterDigital, represents an initial step by the global wireless industry to begin a conversation about the technological, political and real-world steps necessary to develop a follow-up to 5G.

"Why do we need 6G?" asked Karri Kuoppamaki, VP of technology development and strategy for T-Mobile US. "I believe 5G has a long and bright future ahead of it."

Getting ahead of the skis

However, Kuoppamaki made one clear plea to the thousands of registrants to the event: "It's OK to get excited about 6G, but we have to get excited the right way," he said, warning that the industry should not fall victim to the "shiny objects syndrome."

On 6G, "we should focus on getting it right," he said, rather than rushing a new technology to market that doesn't necessarily provide any clear benefits or new or improved use cases.

And Kuoppamaki urged the global industry to avoid moving the spotlight away from 5G. "We do want to make the most out of it," he argued of 5G.

Kuoppamaki's position is perhaps not a surprise considering T-Mobile is still in the first year of its five-year, $60 billion 5G network upgrade project.

Kuoppamaki's statements stood in stark contrast to those of Mazin Gilbert, AT&T's VP of network analytics and automation, who literally helped write a book this year on what next-generation wireless networks might look like.

"It's not a myth, it's not a vision, it's coming," Gilbert said of 6G. Indeed, some top AT&T executives already have been working to "soften folks' expectations around 5G," and talk up the operator's 6G efforts.

6G's new and familiar use cases

In his detailed PowerPoint presentation on 6G, Gilbert offered a look at everyday activities that advanced 5G and 6G technologies would affect, and the new services it could enable. He said users could instantly connect with their doctors during morning workouts, and catch up on the news via augmented reality (AR) glasses. He said the technology would support everything from real-time remote surgery to fully autonomous driving to immersive virtual reality, and that it would transform industries, including manufacturing and agriculture.

"Watch concerts and celebrate your birthday with people around the world, without leaving your home," one slide boatsed. "Use AR for finding products, promotions and reviews." 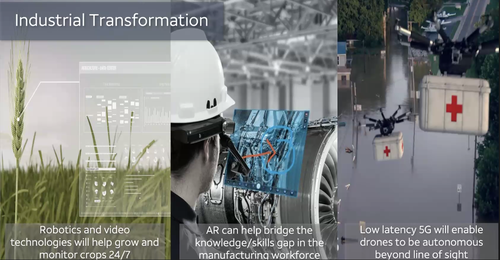 AT&T's Gilbert touted a number of industrial activities that advanced 5G and 6G might enable. Click here for a larger version of this image.
(Source: AT&T)

Gilbert added that 6G might even support science fiction-type services, specifically calling out the 1999 movie "The Matrix," where the character Trinity learned how to fly a helicopter in minutes. "This is what we see our lives going to be like," he said.

It's worth noting that several of these kinds of use cases have long been touted for 5G, and now appear to be migrating into the 6G discussion as well.

Importantly, Gilbert explained that much in the wireless network would need to be changed and updated to support such offerings. He specifically called for disaggregated, virtualized and open network technologies that would support performance, such as sub-1 ms latency. He explained that artificial intelligence (AI) and machine learning (ML) would also be required for such networks.

Others speaking at the event reasoned that 6G would work in the Terahertz bands  which have already been earmarked by the FCC for experimentation  and that the technology likely would be addressed at the International Telecommunication Union's (ITU) World Radiocommunication Conferences (WRC) starting in 2023. That timeline roughly aligns with those provided by other players in the industry; there is a general consensus that 6G might be commercialized by 2028-2030.