Japan's Rakuten is just weeks away from its scheduled commercial launch of a virtualized, open radio access network (RAN) mobile offering that the company has said represents a dramatic overhaul in how wireless networks are constructed and managed.

And later this year, the company plans to package its new mobile strategy into a product that it will sell to other companies worldwide.

"We are packing now all the lessons learned, all the experiences, into our new containerized, cloud platform that we call RMP," Tareq Amin, Rakuten Mobile's chief technology officer, told Light Reading. "We could deploy this as a private cloud deployment for prospective future partners in which you make deploying telco networks in the future as simple as click, purchase, deploy. This is what we envision is going to happen. We're pushing and investing really, really hard in materializing this technology."

RMP is Rakuten Mobile Platform, and it basically contains all of the elements that collectively make up the service that the e-commerce giant plans to launch commercially in Japan next month. The company's platform stretches from the software powering its 4G and 5G antennas to the OSS and BSS systems handling its customer billing and activation systems to its edge computing and autonomous network management functions.

Rakuten's Amin explained that RMP will be sold through an "app store concept" where partners, customers and vendors can pick and choose what they want to work with. 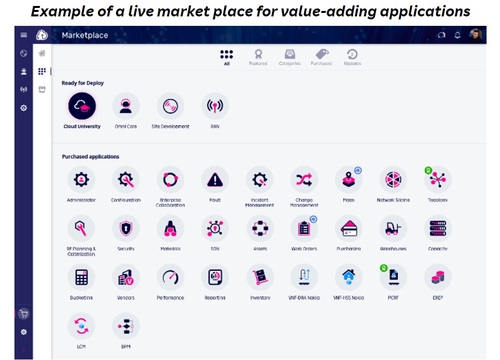 RMP will be offered as a sort of telco network and service app store. Click here for a larger version of this image.
(Source: Rakuten)

"This is a future preview of what we would like to do outside of Japan," Amin said. He said the company plans to begin selling RMP in the second half of 2020.

In doing so, Rakuten will undoubtedly run up against a wide range of vendors selling similar offerings. However, few will have their own commercial offering  backed by their own investments  to bolster their sales prospects.

Pitching Dish
And it appears that Rakuten may well already have an eye on Dish Network in the US as a potential customer for its platform.

"We had gotten a lot of inquiries about the applicability of this approach to the US market. So, we decided to expand in the US. I have formally started a few weeks ago [in California]. However, I have been involved with Rakuten Mobile since the beginning on the Nokia side back in summer of 2018," Azita Arvani, GM of Rakuten Mobile Americas, told Light Reading in an email. (Nokia supplies some of Rakuten's network hardware.) "At this point, we are considering various options, so no major announcements on our strategy, other than expanding to the US."

Dish, for its part, is already rooting for Rakuten in Japan, in the hopes that it can follow the company's playbook in mobile in some way. If the merger of Sprint and T-Mobile is ultimately consummated, Dish will be on the hook to build a nationwide 5G network in the US.

"Rakuten is important in the sense that we've learned a lot from them, but they're really the first company to start embracing kind of an O-RAN open architecture system, and it's been pretty incredible the amount of progress they made in 18 months since we first announced what they were going to do," Dish Network Chairman Charlie Ergen said in February during his company's most recent quarterly conference call with investors, according to a Seeking Alpha transcript of the event.

"It's always a little easier to be the second person, not the first person," Ergen added. "They're going to get a lot more arrows in the back than hopefully we will."

However, some Wall Street analysts are among those who remain skeptical that Rakuten's virtualized, open RAN approach can deliver on the kinds of savings it has promised.

Rakuten, wrote the Wall Street analysts at New Street Research in a recent note to investors, is offering "a low end plan masquerading as a high end plan." The firm noted that Rakuten customers could be subject to significant fees if they roam off the company's mobile network or if they make calls outside of its Link calling and messaging app.

That, however, will quickly change, Rakuten's Amin argued. He said the company's full mobile network in Japan will be finished in two to three years, and that it would make a fine "showcase" for the company's RMP efforts globally.