Roughly once a decade, the telecom industry has a collective fit of excitement over what it calls the latest "generation" of mobile technology. For those who grew up with rotary phones, the first couple were revolutionary. Putting a voice service on a mobile gadget meant casual appointments did not have to be nailed down hours or even days in advance. The third generation, when the data experience arrived, would have been equally gobsmacking were the system not so bad. The fourth fixed that and the smartphone zombie, or smombie, was born.

All that gave the fifth, or 5G, a hard act to follow. Anyone expecting holograms to emerge ghostlike from a handset, or instant immersion in a virtual-reality universe, would have felt cheated. Right now, the big sell to consumers is even more unnecessary speed. Boy racer types sign up and shave a zillionth of a second off the buffering time for a smartphone-streamed episode of Top Gear. The telecom industry is also pitching 5G to other industries, hoping they will use it to connect other gadgets. Few industrial services are not possible with alternative technologies, although 5G will eventually elbow them aside, just as it knocks 4G off its smartphone perch.

A pattern has been established for 6G, which now threatens to be even less revolutionary than 5G. In a new white paper about all things 6G, Ericsson, one of 5G's biggest stakeholders, attempts to set a few parameters. High-speed connectivity and low latency are down as "needed capabilities." There is plenty of discussion about artificially intelligent, energy efficient and programmable networks. The cloud and virtualization receive the obligatory mentions. One could be reading about 5G. 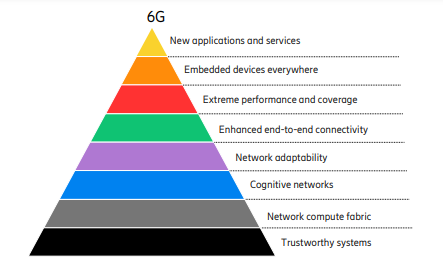 Interdigital, a research company that owns a number of 5G patents, is in alignment. "There is general consensus it will be more of the same  a push to much higher and even more advanced mobile broadband services, and much more support for even deeper embedding of massive machine-type communications," says Alan Carlton, Interdigital's vice president of wireless and Internet technologies. "The use cases coming out look quite familiar."

It is easy to appear churlish about what is still an incredible feat of telecom engineering. Take extended reality, or XR, for instance. That might sound like a bad acid trip or dystopian nightmare, but it could be all the rage by 2030, when 6G is hitting its stride. It would encompass all realities  from augmented through mixed to virtual  and provide the technological glue between them. And it would be impossible with a network technology as slow as 5G, says Carlton. "This is beyond the boundaries of what 5G can easily evolve to in ten years."

6G might also support the development of new hybrid services. With its famously overused triangle, the industry conceived three categories of 5G service  enhanced mobile broadband, ultra-reliable low latency communications and massive machine-type communications. The real value, according to the Interdigital man, is in combinations of these. With 5G, that would have to be done through the use of two or more dedicated network slices, which reserve parts of the network for specific performance characteristics. "It is not the most elegant way of doing it," says Carlton. "There are ways of creating hybrid services more flexibly."

Impressive as all this might sound to industry people, it reinforces the notion 6G will partly be a 5G fix, much as 4G cleaned up 3G's mess. It also makes 6G sound even less marketable to a layperson than 5G. If 2G was a phone you can take to the office or pub, and 3G/4G was the Internet on your mobile device, then what line would neatly encapsulate 5G or 6G? Designed to meet all your low latency needs? An improvement on network slicing? The industry has tried phrasemaking with the Internet of Things, which usually meets with blank stares. More recently, Ericsson has proffered the Internet of Senses, which sounds downright sinister in a Minority Report way.

In the meantime, the industry faces a potential crisis on the road to 6G. As a potential victim of geopolitics, it is in danger of being carved into pro-China and pro-US fiefdoms, if not even smaller territories. This could presage a return to the pre-4G days when there was no global standard but a set of regional ones. "We can travel to any country with few exceptions and connect phones," said Börje Ekholm, Ericsson's CEO, in a recent defence of globalization. "That comes out of a healthy ecosystem driven by competition and cooperation and we think that is something that should and will continue."

Even if it does (and a new US administration is expected to be less aggressive in its dealings with China), the transition to 6G may weaken the powerbrokers of 5G. The evolution toward more software-based networks has created an opportunity for smaller companies to challenge Huawei, Ericsson and Nokia, today's mobile infrastructure giants. Backed by enthusiastic service providers and authorities, they tout new "open RAN" interfaces that promise to link components from different vendors. Not possible today, that might end the phenomenon of vendor "lock-in" and spur competition.

This could be the real 6G breakthrough, one that goes unnoticed by the average smombie. "There is nothing remotely cloud native or multivendor being deployed right now," says Carlton. "I would question if 5G will be brave enough to go all the way. Will the industry be able to let go of its business models? Will regulation evolve enough to support this? Do the IPR [intellectual property rights] models need to evolve as well?"

The questions are pertinent not least because most operators in developed markets have already started building 5G networks with traditional vendors and tools. For precisely that reason, Howard Watson, the chief technology officer of the UK's BT, does not expect to use open RAN until late 2026, at the earliest, when Carlton believes 6G standardization will have started. Introducing open RAN before then would mean writing off valuable network equipment that needs replacing.

The market is undecided on the impact that software, virtualization and new interfaces will eventually have. Only a few cheerleaders expect anything dramatic by the time 5G turns middle-aged. In a market for radio access networks that typically generates $30-35 billion in revenues annually, Dell'Oro, a market-research firm, forecasts open RAN sales of more than $3 billion in 2024. Omdia, a sister company to Light Reading, thinks operators will spend about $2.1 billion on open, virtualized RAN products that year. "We are seeing a modest impact in 2022," said Ekholm when asked about open RAN during Ericsson's capital markets day on November 10.

His business, nevertheless, recently promised its own set of cloud RAN goodies next year. It is looking for sales growth to the business sector, where those products could find a receptive audience sooner than in the telco market. And it is determined to boost the share of revenues it generates from software. In all those developments are signs of the disruption that may be coming. One thing seems very likely: If an open and virtualized RAN does eat the network, it will happen when telecom is obsessing about 6G and 5G is yesterday's news.

Like what we have to say? Click here to sign up to our daily newsletter
COMMENTS
Newest First | Oldest First | Threaded View
Add Comment
Be the first to post a comment regarding this story.
EDUCATIONAL RESOURCES
sponsor supplied content
C-BAND Is Here  Will My Radio Work?
Seamless Connectivity Fuels Industrial Innovation  Forrester Report
The importance of collaboration in creating next generation technology
Achieving low power 5G Open RAN Radios
Disaggregation Ahead, Open RAN Challenges and Opportunities. A Panel with ADI, Vodafone, Facebook, Marvel
Educational Resources Archive
More Blogs from Morris Lore
6G has every chance of screwing the carriers