WISPs to command 9M customers by next year  analysts

A new report indicates that the fixed wireless Internet industry in the US is growing by leaps and bounds, and operators could collect up to 10 million customers by 2023.

The report from the Carmel Group was published Monday, the day that the Wireless Internet Service Providers Association (WISPA) trade association kicked off its annual WISPAMERICA trade show. The report also represents an update to the 2017 report published by the Carmel Group that counted 4 million fixed wireless customers at the end of 2016.

"The positive trajectory of subscribers and revenues in the US fixed-wireless broadband industry is real cause for objective optimism," the report noted. 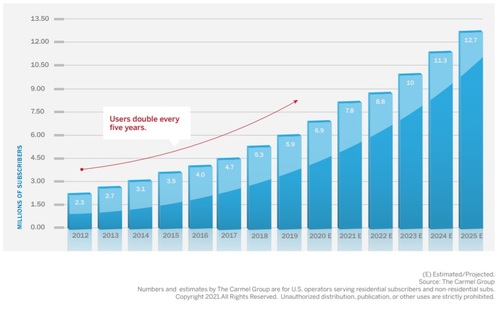 The Carmel Group also predicted that fixed wireless Internet providers generated roughly $4.4 billion in revenues from their customers in 2020. The firm projected that figure will grow to $10.9 billion by the end of 2025.

The firm counted around 2,800 fixed-wireless-centric operators in the US. Those operators either use fixed wireless technologies exclusively or a mix of fiber and fixed wireless. The firm named Rise Broadband, Midco and Nextlink Internet as some of the nation's largest providers.

Importantly, the firm didn't count mobile network operators in its findings. While operators like T-Mobile and Verizon primarily focus on mobile services, they're also branching into the fixed wireless opportunity in geographic locations where their networks have excess capacity. T-Mobile, for its part, said it expects to gain between 7 million and 8 million fixed wireless Internet customers within the next five years across both rural and urban locations. Verizon, meantime, said it expects revenues from fixed wireless services of roughly $1 billion by 2023, a figure the financial analysts at Sanford C. Bernstein & Co. said implies 1.5 million subscribers.

Interestingly, the Carmel Group dove into calculations regarding the construction of fixed wireless networks in comparison to other networking technologies. The firm found that it generally costs less than $500 in network capital outlay for a WISP to connect a fixed-wireless customer. That's far less than the roughly $4,500 it costs a fiber provider to connect a subscriber, or the $2,200 for a cable operator. However, average user download speeds are generally much slower among WISPs.

"Finally, and perhaps of greatest importance to investors, the ROI [return on investment] timeframe for fixed wireless is under one year," the firm wrote. "This compares to a minimum of almost two years to as much as six years for the other technologies."

The calculations are important considering the cash the US government may allocate to the construction of broadband networks in rural areas. For example, the White House recently proposed up to $100 billion in funding for broadband; a group of top Senate Republicans recently countered with a proposal that would allocate $65 billion toward broadband.

All that government spending would be in addition to the programs that have already been erected to help finance the construction of telecom networks in rural areas, including the Rural Digital Opportunity Fund (RDOF) and the Connect America Fund Phase II (CAF II) project.

But it's unclear how much of that money might be directed toward fiber networks versus fixed wireless networks. There's a heated debate in policy circles as to whether fiber networks are a better long-term investment for federal funding.