Any grand-looking home built on rickety foundations could be a pile of rubble in the making. The same might be said of any 5G network currently under construction.

The basestations sprouting across cities and towns are designed to weather a blizzard of smartphone data. But without sturdy "backhaul" links to an operator's core, those networks would eventually be overwhelmed.

It is a long-running concern that has resurfaced in the UK as operators prepare for an upgrade to "standalone" 5G, a version of the technology expected to place additional pressure on the network.

In the past, operators have relied on a mixture of technologies for backhaul, including wireless microwave links and the managed fiber connections sold by Openreach, the fixed-line incumbent. But as data consumption grows, these legacy options are starting to look flimsy, expensive or both. 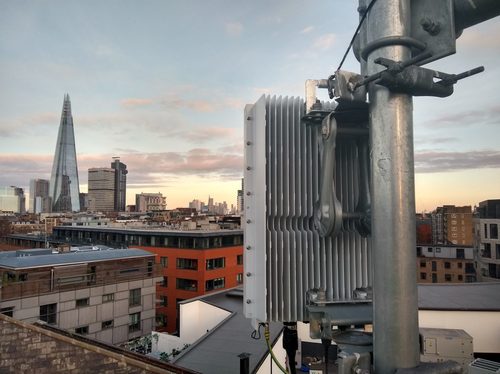 The links between basestations and the core risk becoming a bottleneck.
(Source: Vodafone)

Previously outspoken on the issue, Vodafone UK is understood to be worried about the cost implications of rolling out standalone 5G in the absence of better backhaul options. That job will partly entail investment in multiband radios so that Vodafone can meet future customer needs for 5G coverage and capacity. As traffic builds up, the backhaul foundations at each mobile site will need to be fortified.

Vodafone still depends on microwave technology at some of the sites it shares with Virgin Media O2 in the west of the country. Its plan, however, as outlined in feedback provided to government authorities last year, is to upgrade these to fiber, the technology it uses elsewhere. Despite improvements, microwave is not considered strong enough to withstand the deluge of data that advanced 5G applications may eventually bring.

Because Vodafone does not own much fiber infrastructure, it has relied heavily on wholesale products sold by Openreach. But it is far from being a satisfied customer.

The products Openreach sells are "active," meaning customers are effectively buying capacity on Openreach's electronic equipment. Every time Vodafone needs more capacity, it must stump up a higher fee. That means operating costs associated with backhaul are growing and unpredictable.

A subsidiary of BT Group, Openreach has certainly not singled out Vodafone for unfavorable treatment. Regulators have ensured it sells the same product on the same terms to every customer, including EE, its mobile network sibling.

BT, however, has no reason to care about rising backhaul expenses for EE. Higher costs for one part of the business equal higher sales for another. The transactions are merely an exercise in shifting money around the group.

What Vodafone really wants  as an alternative to these active fiber products  is something called dark fiber. With this, it would gain more control over the underlying fiber connection and have the freedom to install its own routers at either end. It views this as a far more economical option in the long run.

Unfortunately, Ofcom, the UK regulator, has never gone far enough in forcing BT to offer dark fiber services, as far as Vodafone is concerned, and they remain largely unavailable, it has said.

"Vodafone believes this is because BT, as a vertically integrated mobile and fixed operator, does not, on balance, have the incentives to supply and therefore support other mobile operators," it wrote to authorities last year.

In responding to such criticisms, BT has insisted that any dark fiber mandate would undermine investment, creating a market incentive "to continue to rely on access to Openreach's network rather than build new networks."

Setting regulated prices, it has argued, would also drive customers toward dark fiber for arbitrage reasons and not because dark fiber is more economical than active products.

CityFibre and Virgin Media, BT's main fixed-line rivals, have appeared broadly to agree, and there has been no dark fiber mandate by Ofcom. Vodafone will probably not be able to resurrect the issue until the next market review several years from now.

Where does all this leave Vodafone? Not entirely devoid of dark fiber. In CityFibre and Virgin Media O2, it has two alternative fixed-line operators that do sell the product.

Last year, though, Vodafone objected to the merger of Virgin Media and O2 that created the second of those companies out of fear the new-look entity  as another vertically integrated mobile and fixed operator  would lose the incentive to keep selling dark fiber.

So far, this does not appear to have happened. Vodafone is still a dark fiber customer, a Virgin Media O2 spokesperson told Light Reading by email, saying there are "no plans to remove it [dark fiber] as a product more generally." The trouble, minus any regulation, is that Virgin Media O2 is effectively a dark fiber monopoly in parts of the UK.

"Virgin is the only wholesale supplier of mobile backhaul services in the UK that offers both the product most suitable for mobile backhaul transmission  in particular as consumer demand for data dramatically increases  and has network in the locations where we and other mobile operators require the service," said Vodafone last year.

The extent of CityFibre's footprint is unclear, but its full-fiber network probably reaches far fewer residential properties than the Openreach one.

Back in November, Vodafone reckoned it would have access to about 8 million homes by spring 2022 through wholesale agreements with Openreach and CityFibre. At the time, Openreach passed about 6.5 million properties and the number should be around 7 million now, although Vodafone's deal is unlikely to cover all of them.

The remaining options for Vodafone could include building its own fiber backhaul network or buying a fiber operator, such as CityFibre. Neither would be inexpensive, and both would seemingly contradict Vodafone UK's asset-light strategy in fixed. Nor would a takeover of CityFibre, with its relatively small footprint, immediately address the problem.

Vodafone may prefer to wait for several years of network investment and consolidation before making a move. But that would carry risk. Its existing backhaul might feel the strain sooner than it expects. Assets might eventually turn out to be very expensive.

The need for superior 5G backhaul partly explains why forecasts for spending on broadband equipment are so bullish.

Investment in fiber and copper access came to about $8.7 billion last year, according to Omdia (a sister company to Light Reading). By 2026, annual spending will hit about $15.5 billion, it forecasts, with 95% of that going on passive optical networks.

At equipment makers like Nokia, staff on the fixed-line side currently wear broad smiles. Nokia revenues at that division soared 35% last year, to nearly 2.4 billion ($2.6 billion). For telco executives spending more while struggling to boost sales  with BT's overall turnover down 7% last year  a frown is the more typical expression.