After all, the operator is widely expected to dominate both the ongoing CBRS spectrum auction and the upcoming C-band spectrum auction. Further, Verizon has also been purchasing spectrum licenses around the country on the so-called "secondary market," directly from the companies that own the licenses.

In the past six months, Verizon has purchased most of the spectrum licenses from two small wireless network operators, Chat Mobility and Blue Wireless. And according to Brian Goemmer, founder of spectrum-tracking company AllNet Insights & Analytics, those are just two of almost a dozen spectrum transactions that Verizon has been involved with this year.

Goemmer said that Verizon has acquired spectrum from license holders ranging from AT&T (via a spectrum swap) to Spotlight Media to Orion Wireless to Strata Networks. He said that, in total, Verizon has gained 126 million MHz-POP in locations across the country. The MHz-POP calculation is applied to most spectrum transactions and reflects the number of people covered compared with the amount of spectrum available. 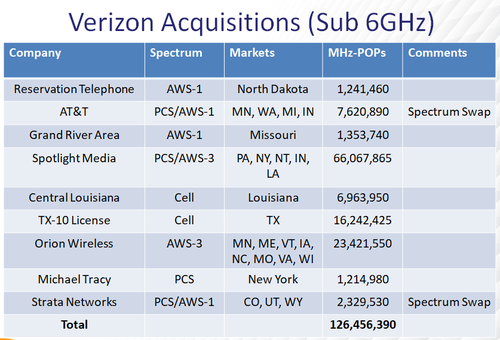 Verizon has acquired a number of spectrum licenses during 2020. Click here for a larger version of this image.
(Source: AllNet Insights & Analytics)

Goemmer noted that the acquisitions all involve spectrum below 6GHz. He said Verizon has also engaged in a handful of transactions involving millimeter wave spectrum during 2020 with the likes of Mashell Telecom and 2 Lightspeed.

To be clear, major wireless network operators including Verizon routinely evaluate their spectrum holdings as they work to fill in coverage gaps and balance their holdings against their customers' usage. For example, T-Mobile recently entered a three-year arrangement with Columbia Capital to lease between 10MHz-30MHz of 600MHz spectrum in major markets including St. Louis, San Francisco, Seattle, Philadelphia, Chicago, Boston and Los Angeles.

But for Verizon, the purchases are particularly noteworthy given the operator's trailing position in spectrum against its rivals. The situation is such that T-Mobile's CEO recently called out Verizon's lagging spectrum holdings. 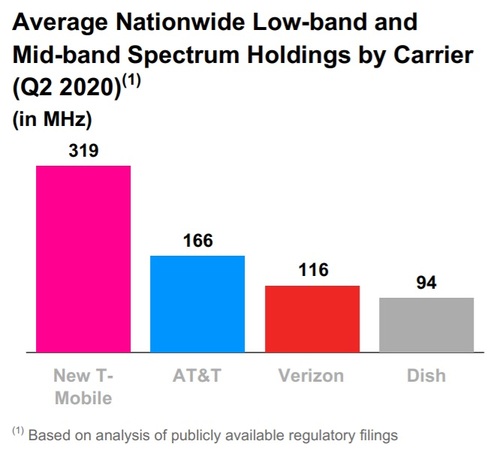 Click here for a larger version of this image.
(Source: T-Mobile)

Thus, Verizon is clearly attempting to narrow that gap in whatever way it can, either through spectrum auctions or the secondary market.