Verizon this week announced that it signed new MVNO agreements with Comcast and Charter Communications and it believes those agreements will prevent the cablecos from straying to other providers, like rival AT&T.

"We have expanded and extended our relationship in order to make sure that the customers at Charter and Comcast would have access to the enhanced engineering capabilities that we've been delivering," explained Verizon EVP Ronan Dunne, during an investor event Wednesday, when questioned on the topic. "And as a result of that ... I think we've created the conditions to ensure that we're their primary provider of connectivity for the foreseeable future."

Such comments are noteworthy given that cable companies, including Comcast and Charter, commanded fully 8% of all new mobile customers in the third quarter.

Verizon officials listed Comcast and Charter as upholding one of several main pillars the operator is hoping to use to generate revenues from 5G. 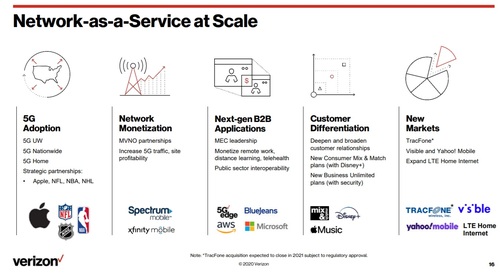 Comcast and Charter are part of Verizon's 'network monetization' strategy. Click here for a larger version of this image.
(Source: Verizon)

However, Verizon executives reiterated their intention to continue to compete with cable companies via services ranging from fiber Internet connections to fixed wireless access technologies.

AT&T executives in January discussed the possibility of providing MVNO services to cable companies. As Light Reading reported in June, Cox Communications officials discussed an MVNO agreement with AT&T as part of that company's newfound interest in entering the mobile industry. The issue gained further traction after MVNO TracFone announced in July that it had inked a new, unspecified MVNO agreement that significantly increased its earnings.

Another dynamic in the relationship between Verizon and its cable MVNOs is the possibility that Comcast and Charter will construct their own wireless networks, at least in select areas. Both companies purchased millions of dollars worth of CBRS spectrum in the FCC's recent auction, and both are registered to participate in the upcoming C-band auction. Executives from both Comcast and Charter have hinted at their interest in building wireless networks in order to reduce their MVNO payments to Verizon.

When questioned on this possibility, Verizon's Dunne cast cold water on the notion that Comcast and Charter would be able to sever their MVNO ties completely. "A single band of spectrum doesn't create a network in the context of the service you deliver to customers," he said.

Dunne declined to speculate on what the cable companies might do with their spectrum holdings.