T-Mobile also said it gained 224,000 new fixed wireless Internet customers, ending the period with a total of 646,000 in-home Internet customers. That's above the company's year-end goal of 500,000 customers and well ahead of the 150,000 Verizon reported at the end of the third quarter.

Finally, T-Mobile reported that it entered 2022 by covering a total of 210 million people with roughly 100MHz of midband 5G services in its 2.5GHz spectrum. That's a critically important figure considering Verizon expects to cover just 100 million people with its own midband 5G network this month  and Verizon is only using around 60MHz of C-band spectrum for that offering. As a result, T-Mobile is advertising download speeds of around 400 Mbit/s while Verizon is promising download speeds of around 90-170 Mbit/s.

AT&T, meanwhile, has only promised to cover around 75 million people sometime this year with its own midband 5G network in C-band spectrum.

During an investor event Thursday afternoon, T-Mobile CFO Peter Osvaldik argued that there's "a tremendous disparity" between the 5G services that T-Mobile offers and the 5G services offered by its rivals. And he said that T-Mobile's sizable 5G network capacity was powering the company's customer gains.

As a result, Osvaldik said T-Mobile plans to make extra investments this year to maintain the company's network position against its rivals.

A focus on network capex

"I believe capex will likely be higher, year over year [in 2022], as we race to implement this network even faster than we planned," he said. Specifically, he said T-Mobile expects to shift some of the capital expenses (capex) it had planned to make in 2023 into 2022, in order to expand T-Mobile's network. However, T-Mobile's Osvaldik didn't provide any firm figures around the operator's expected capex in 2022 or 2023. 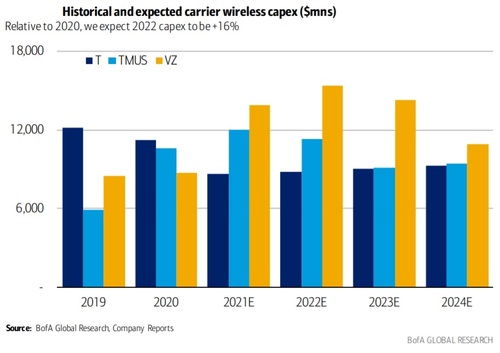 In a recent report, the financial analysts at BofA Global Research reported that they believe the nation's three big wireless network operators will increase capex spending by 16% in 2022 compared with 2020. Click here for a larger version of this image.
(Source: BofA Global Research)

In discussing T-Mobile's increased spending on its network, Osvaldik pointed to the operator's newly announced 12-year agreement with cell tower operator Crown Castle. As a result of the deal, Crown Castle said it expects to record $250 million of additional site rental revenues in 2022.

Another look at small cells

Interestingly, T-Mobile's agreement with Crown Castle also calls for 35,000 new small cell nodes over the coming years. However, Osvaldik explained that many of those small cells involve locations that T-Mobile is already using and will mainly allow the operator to bulk up its existing small cell network.

"This 35,000-node commitment signals the continued importance of small cells to T-Mobile's eventual network densification, even as it currently focuses on upgrading tower sites with Sprint's 2.5GHz spectrum," wrote the financial analysts at Raymond James in a note to investors Thursday.