Rakuten finally picks up the iPhone

Japanese smartphone brands are as easy to find in downtown Tokyo as neon signs. Fujitsu, Kyocera, Sharp and Sony all supply gadgetry to local consumers. But Japan is not big on smartphone patriotism. Its most popular device by far is Apple's iPhone, with a 45% share of the market last summer, according to data from Counterpoint Research. Nobody else came close.

The iPhone's popularity has been a major problem for Rakuten Mobile, the company now building a fourth mobile network in Japan. Launched in April last year, its low-cost mobile service has been available with a range of devices  but not the iPhone. For Japan's Apple-loving consumers, that has made Rakuten Mobile a no-go zone.

Until now. In the latest announcement broadcast from its offices in Tokyo, Rakuten revealed it is now a member of the iPhone club. Five models are to become available on April 30, including the 5G-compatible iPhone 12 that Apple unveiled last October. For an operator awash with 5G spectrum, and determined to be seen as a technology pioneer, that is vital. 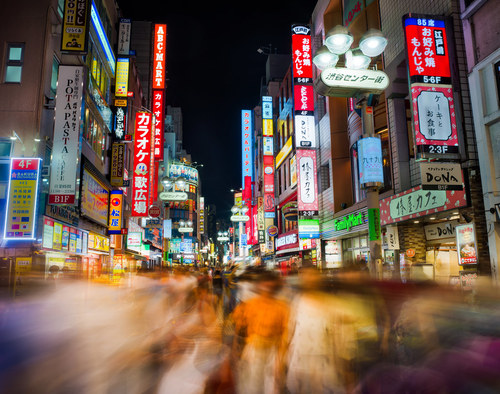 Downtown Tokyo is what tech lovers pray the afterlife is like.

Membership of the iPhone club is long overdue. When Light Reading asked Tareq Amin, Rakuten Mobile's chief technology officer, about iPhone availability in March last year, he indicated that efforts to bring Apple to Rakuten were already underway. "Apple here is hugely, hugely respected and my only comment is that we certainly need to continue to work to find a way to get Apple devices certified into our network and that is something that at this stage I can say is a lot of work in progress," he said.

iPhone unavailability will not have helped a company that has failed to revolutionize the Japanese mobile market in its first year of service. Rakuten currently boasts just 3.9 million service "applications" in a saturated mobile market of about 126 million people, and it has not said how many are actually using its service. Including its mobile virtual network operator business, which rents capacity on other networks, it claims about 4.5 million mobile customers in total.

But the lack of an iPhone offering is not Rakuten's only problem. It has secured far less 4G spectrum than any of its older rivals and appeared to blame this for the slower average speeds recorded on its network by OpenSignal, a monitoring firm. It is investing in new cloud and software technologies it claims will give it a cost advantage over any traditional competitor, but its capital expenditure bill is substantial and rising.

That is largely because Rakuten needs far more network equipment than it had previously expected. It originally thought it would be able to provide 4G coverage to 96% of the population with fewer than 28,000 basestations. But the figure was increased to 44,000 in February this year, adding another $2 billion to Rakuten's overall bill. Last month, Rakuten sold shares worth $2.2 billion to companies including Japan Post Holdings, Tencent and Walmart to fund the rollout.

A transition to 5G services might give Rakuten the edge. It is not disadvantaged when it comes to 5G spectrum and its investments could have a more noticeable impact on 5G than 4G competitiveness. But a surge of 5G interest would be a major test for the open RAN technology that Rakuten is using. Critics say these virtualized systems, allowing one vendor's hardware to be used with another's software, cannot yet match the fully integrated radio access networks developed by Ericsson, Huawei and Nokia. Massive MIMO, a 5G technology intended for the most demanding conditions, is the biggest challenge, according to Vodafone.

Cue the growing interest in massive MIMO specifications. Ericsson now boasts a radio unit with 64 transmitters and receivers that weighs just 20 kilograms, 16 less than its previous model, while Huawei has been flaunting one it says weighs only 19 kilograms. The numbers matter because lighter units promise savings on energy and installation. And while open RAN developers and proponents insist on their competitiveness, none, including Rakuten, has been able to share details.

What Rakuten has disclosed is that only 1,000 5G basestations had been installed by March. In the meantime, its introduction of new pricing plans has tickled interest in its mobile service. At the start of the year, there were just 2.2 million applications. By April, another 1.7 million had signed up. The launch of the iPhone 12 is likely to provide another boost. If that brings a corresponding surge in 5G traffic, 5G rollout may have to speed up.