Just a few months since Pekka Lundmark took charge of Nokia, the Finnish equipment giant at last has some color in its cheeks. Due largely to 5G product setbacks, it has struggled in recent years next to Ericsson, its big Swedish rival. Today, it reported its strongest quarterly sales performance in six years. While still early days, a turnaround plan seems to be working.

The highlight was the 9% increase in headline sales on a constant-currency basis. The last time things looked that good for Nokia was in April 2015, well before its 15.6 billion (US$18.9 billion, at today's exchange rate) takeover of Alcatel-Lucent, when revenues grew 11%. On a reported basis, sales were up 3%, to nearly 5.1 billion ($6.2 billion), compared with the year-earlier period.

Combined with savings, that allowed Nokia to report a small net profit of 263 million ($319 million), compared with a 115 million ($139 million) loss a year earlier. "It is a good start," Lundmark told reporters on a call. "This provides a good foundation for delivering what we are talking about, especially this year." 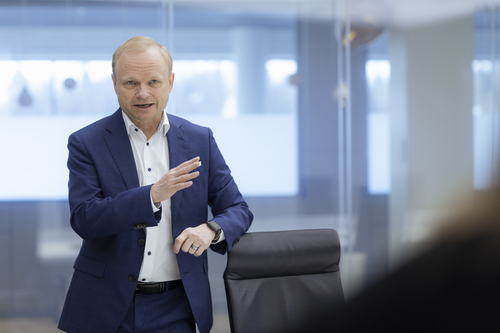 What he is talking about specifically is an operating margin of between 7% and 10% in 2021, as Nokia claws back 5G competitiveness and slims down. The company's operating margin for the first quarter was an impressive 8.5%, compared with a negative 1.5% a year ago, giving Lundmark the confidence that full-year profitability will now be at the "higher end" of his guidance range.

Investors are suddenly enthused, sending Nokia's share price up 12% in Helsinki when the market opened this morning. It is now a fifth higher than it was this time last year, reflecting some optimism that Nokia can mount a stronger challenge to its main rivals in the market for network products.

A turnaround in mobile, where Nokia generates 45% of its sales, had already started before Lundmark joined. It largely involves replacing the more expensive components Nokia previously selected for its 5G basestations with lower-cost chips, developed partly in-house. As the swap-out has continued, margins have steadily risen. With 44% of products based on the new chips in the first quarter, the gross margin at Nokia's mobile networks unit rose to 32.8%, from 30.1% a year earlier.

"What I am particularly pleased with is that this is the year when we can make progress on the product competitiveness side," said Lundmark. It is also the year when he expects the 5G market to be larger than the 4G one for the first time. Pricing power will matter.

Earlier problems cost Nokia dearly in market share. It emerged from China's big 5G tender last year with zero contracts and failed to secure a 5G deal with Verizon, North America's biggest mobile operator, which preferred South Korea's Samsung. Yet it boasts gains in Asia-Pacific and Europe, where a backlash against Huawei has brought new business. A role in the second phase of China's 5G deployment looks possible this year.

While reported mobile sales were down 4%, to about 2.3 billion ($2.8 billion), the like-for-like growth of 2% marks a turnaround since the same period last year, when revenues dropped 3% on a constant-currency basis. Yes, it is much lower than the 15% increase that Ericsson claimed for its networks business. But the Swedish firm, besides winning deals in China, enjoyed gains in Asia-Pacific that Nokia expects to see at a later stage.

"There are some timing effects in Japan," Lundmark told Light Reading, when asked why Nokia's Asia-Pacific revenues fell 17% year-on-year in the quarter, to 581 million ($704 million). "We are working with all major carriers but one of them is currently expanding 5G in our competitor's footprint and our footprint will follow later."

Restructuring and related cost savings throughout the business were partly responsible for the increase in profitability. Hoping to save about 600 million ($727 million) in annual expenses, Lundmark flagged plans in March to cut between 5,000 and 10,000 jobs over the next 18 to 24 months. Freeing up funds for investment in research and development, the move will leave Nokia with between 80,000 and 85,000 employees worldwide, down from about 103,000 as recently as 2018.

For all the attention on mobile, it was the network infrastructure business, Nokia's second-largest unit, that was mainly responsible for the headline sales growth. Revenues soared 22%, to more than 1.7 billion ($2.1 billion), and were up 28% on a constant-currency basis. Customers spent heavily on the rollout of Internet Protocol and fiber networks in markets such as China and India.

Nokia's expansion into the enterprise sector also continued to pay off, with sales to non-telecom businesses up 18%, to 354 million ($429 million). "We estimate over 70% of large companies will invest in 5G over the next five years and as a proof point in Q1 we secured 63 new enterprise customers and drove 18% topline growth," said Lundmark.

Some disappointment did come at the cloud and network services unit, where sales fell 9%, to 674 million ($817 million). Nokia blamed the unfavorable comparison on a "particularly strong" first quarter in 2020 but said it was also forced to quit some "poorly performing projects," without providing further details.

It has been keen to highlight recent cloud partnerships with all three of the hyperscale providers  AWS, Google Cloud and Microsoft Azure. In future, that could make it easier for service providers to run network functions in the public cloud, a move that US operator Dish Network announced with AWS, but without Nokia, just last week. The risk to the Finnish firm is that such an accommodation with the public cloud leaves it with fewer services to provide.

The semiconductor crunch that has disrupted the automotive sector and parts of the technology market is another worry this year. "We are working very hard on a daily basis with key suppliers," Lundmark told Light Reading. "I believe we will continue to do a great job, but it would be naïve to say there are no risks because visibility is not what it was."