The shake-up of Nokia's senior management team continues with news today that Barry French, the Finnish vendor's chief marketing officer since 2014, will step down at the end of the year.

French announced his departure on his own LinkedIn page, saying only that it was "time to think about what comes next." No further explanation of the move was provided.

But there were kind words from Pekka Lundmark, who took over as CEO in August and whose comments suggest French was not under pressure to leave as part of restructuring. 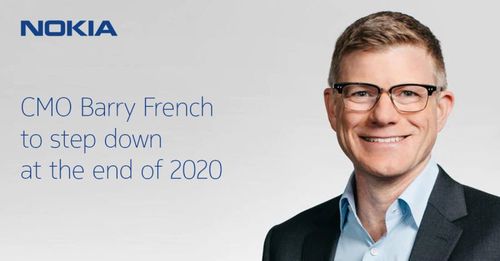 "Barry French has been at the heart of transforming Nokia into a leader in telecom network infrastructure, repositioning the company, significantly increasing brand value and building a high-performing organization," he said. "I appreciate the support he has given me since I took on the role of Nokia CEO, particularly given that I know he has been considering a change."

French joined Nokia Siemens Networks, the company formed when Nokia and Germany Siemens merged their network activities, in 2006 as head of communications. He became head of marketing and corporate affairs in 2008 before assuming his current role six years later.

His update comes days after Lundmark disclosed details of the latest restructuring at Nokia, which is seen to have fallen behind Ericsson, its Swedish rival, in the all-important market for new 5G technology.

Lundmark is separating out the mobile access and other divisions and says the new operating units will be measured on the basis of clear revenue and profit targets.

Promising to boost investment in 5G research and development, he has made a clean break with the "end-to-end" strategy of Rajeev Suri, his predecessor, saying "that is not how customers buy."

Suri had largely justified his 15.6 billion ($18.5 billion) takeover of Alcatel-Lucent in 2016 by arguing that customers wanted a vendor with the complete spectrum of network products.

Several executives have already been named as the heads of the new divisions, and others are bound to exit in the ongoing shake-up.

Nokia's stock lost a fifth of its value after Lundmark's strategy update and the publication of disappointing third-quarter results, which signaled a weaker outlook and probable decline in mobile market share next year.

The Finnish company was seen to have lost out when Verizon recently awarded a $6.6 billion 5G contract to South Korea's Samsung.

"We have lost share at one large North American customer, see some margin pressure in that market and believe we need to further increase R&D investments to ensure leadership in 5G," said Lundmark in his prepared comments.