In almost any other industry, a year-over-year growth rate of 46% would earn adjectives like "extraordinary." But the wireless business isn't just any other industry, and Ericsson's latest mobility report calls a 46% increase in mobile data traffic from Q1 2020 to Q1 2021 "a more normal level" compared to figures that topped 75% in 2018 and early 2019. 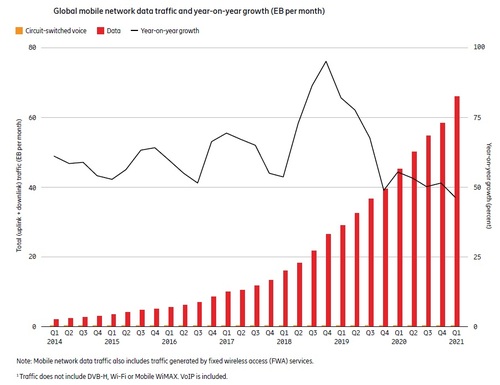 "The speed of 5G uptake is far higher than it was for 4G, let alone 3G, and it is one more sign of an industry that tirelessly continues to drive innovation and bring new technology to the market," writes Fredrik Jejdling, executive vice president and head of business area networks for Ericsson, in the report's introduction.

While the report notes impressive growth in fixed-wireless access (FWA) and Internet of Things (IoT) usage (the 3.5 billion estimate includes the former but not the latter), the smartphone remains the fast-beating heart of the industry.

Ericsson estimates that mobile network data traffic  as in, excluding FWA and IoT  around the world hit 49 exabytes a month by the end of 2020 and topped 66EB a month in the first quarter of 2021. By 2026, the report predicts a total of 237EB a month.

To put this in the context of individual, data-devouring phones, the average smartphone now surpasses 10 gigabytes a month and should reach 35GB by the end of 2026. Video today accounts for two-thirds of the total and will rise to 77% by 2026.

The most data-intensive region covered in Ericsson's report, the Gulf Cooperation Council countries of Bahrain, Kuwait, Oman, Qatar, Saudi Arabia and the United Arab Emirates, hit an average of 18.4GB a month in 2020. A sidebar notes how such government digital-innovation initiatives as Qatar's National Vision 2030 and the UAE's Smart Dubai have helped goose this growth.

But by 2026, the report predicts North America will see the highest average smartphone usage, at 48GB a month. It suggests "the adoption of immersive consumer services using AR/VR" will drive long-term growth and send 5G soaring to reach 84% of US subscriptions, versus 4% now.

In the US and many other markets, putting new lowband and midband 5G spectrum into service will support this growth. But 5G coverage will continue to lag well behind 4G coverage: By 2026, 5G will cover about 60% of the world's population, up from roughly 15% at the end of 2020, while 4G will reach 95% by 2026, up from today's 80% coverage.

One caveat to keep in mind with all of these predictions: Ericsson's experts could still underestimate this industry's growth possibilities, and in particular those of 5G. That seems to have happened one year ago, when the mobility report issued then predicted 190 million 5G subscriptions worldwide by the end of 2020, revising a prior estimate of just 100 million, and saw 4G continuing to grow through 2022.