Feathers ruffled by last year's manufacturing upsets, Intel CEO Bob Swan has at least been able to hatch a few successes before he takes wing on February 15. Pat Gelsinger, his replacement, is under immediate pressure to rectify the problems and show that Intel can keep up with its rivals. The trick will be sustaining momentum in 5G and other growth areas at the same time.

Investors seem unsure what to make of the chip giant's latest results. Its share price closed up 6.5% on Thursday, at $62.46, after it beat earnings expectations. Revenues dipped only 1% year-on-year, to about $20 billion, while net income dropped 15%, to $5.9 billion, due partly to increased spending on R&D. The year-earlier quarter had been a particularly strong one, and full-year 2020 sales did rise 8%, to about $77.9 billion. Yet the share price fell 8.5% when the market opened today.

It is well up on a low point of $48.28 last October  buoyed by the recent appointment of Gelsinger, the CEO of Dell's VMware subsidiary  and worth almost twice as much as it was five years ago. The concern for analysts is what happened last July when Intel owned up to manufacturing problems and said these would delay its introduction of 7-nanometer technology until 2022. 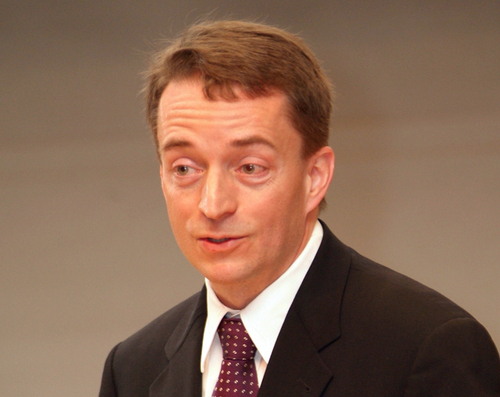 The chips are down for incoming CEO Pat Gelsinger.

Traditionally, that nanometer metric refers to the spaces between transistors. The smaller the number, the more capable the chip. It is fast reaching the point where semiconductor marketing departments will need a sub-nanometer expression. But Intel's might have longer to wait before they use it. Mistakes mean it lags rivals such as AMD and TSMC, a Taiwanese foundry, in this important design area.

Outgoing and incoming bosses insist the company is now in recovery mode. "When 7-nanometer was originally defined, the flow contained a particular sequence of steps that contributed to the defect issue we discussed in July," Swan told analysts, according to a Seeking Alpha transcript of the earnings call. "By rearchitecting these steps, we've been able to resolve the defects." Gelsinger, on his first earnings call, was similarly effusive, as anyone might have expected.

But external confidence is low. One question that seems to preoccupy analysts is how much Intel will have to rely on third-party foundries between now and 2023 rather than its own production facilities. Gelsinger was not able to provide much certainty. "We believe the majority will be on our 7 nanometers, but we will be increasing the use of foundry capabilities in that timeframe as well," he said.

The positive messages could not entirely mollify analysts. For a year, Intel had insisted its 7-nanometer technology was on track, said Bernstein analyst Stacy Rasgon. Then it suddenly alerted the world to problems that have major ramifications for company strategy. "How can we as investors have confidence?" he asked.

Related to that is concern Intel might now find itself perpetually on the back foot. Competitors licensing technology from Arm Holdings, a UK firm whose designs feature in many smartphones, have an opportunity to make progress while Intel is cleaning up its mess. All Swan could really say is that Intel will continue to invest "beyond" 7-nanometer designs.

But it was certainly not all bad news. Several business activities have remained bright spots throughout Intel's 7-nanometer crisis, including a push into radio access networks. Intel now claims a 40% share of the market for general-purpose and customized processors in this market, where it competes against the likes of Broadcom, HiSilicon, Marvell, Qualcomm and Xilinx. That figure is double its 2022 target a year ahead of schedule.

"We've made tremendous progress in migrating a custom-oriented environment to general-purpose compute and that has been a big source of growth from a $1 billion business probably five or six years ago to $5 billion last year," Swan told analysts. A partnership with VMware has already helped Intel to win business in this sector, and Gelsinger, as VMware's former boss, could provide an additional spur.

The risk is that fixing the 7-nanometer crisis gobbles up resources and diverts attention from other activities. Fortunately, Intel's resources are vast. Last year, despite the pandemic, it generated a record $35.4 billion in cash from operations, and $21.1 billion in free cash flow. It remains highly profitable, too, with a gross margin of nearly 57% and an operating one of about 30% for the recent fourth quarter. But giants can be tumbled. Any further setbacks in the Gelsinger era could put the market in a panic.