As the dust settles on the C-band auction  which has been paused for the holiday break  financial analysts are now struggling to adapt to a new 5G reality. After all, in just 12 days of bidding, the auction has surpassed even the most aggressive estimates. It now totals a staggering $69.8 billion in gross proceeds, far above initial, high-end expectations of as much as $50 billion.

Bidding resumes January 4. The FCC will announce the winners roughly a week after the auction ends, which will occur when bidders stop placing new bids.

The financial analysts at Raymond James  which had initially expected total gross proceeds of just $33 billion  described the auction's current, $69.8 billion total as "a nosebleed, or oxygen-deprived level."

After all, the Raymond James analysts pointed out that overall incremental gross bids are beginning to taper off: 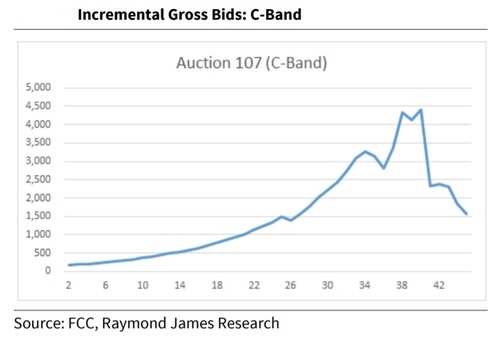 Click here for a larger version of this image.
(Source: Raymond James)

But which C-band bidders will account for all this spending?

Here are the latest C-band auction spending estimates from the Raymond James analysts:

But there's an important caveat to these figures: They include not only total bids but also the estimated $3.3 billion to $5.2 billion in expenses that C-band winners will need to collectively cough up to upgrade existing radio and TV operations in C-band spectrum. They also include the $9.7 billion in "incentive" payments C-band auction winners can elect to make to C-band incumbents like SES and Intelsat so they'll vacate portions of the band by 2021 instead of the required 2023.

However, those figures don't include the billions of additional dollars that C-band spectrum license holders will need to fork over for the radios, technicians and cell towers necessary to actually deliver 5G services.

So why are C-band bidders seemingly so desperate to obtain the midband spectrum licenses? Mainly it's because the C-band auction is a once-in-a-lifetime event. Indeed, it will release enough spectrum below 6GHz to essentially create another T-Mobile: 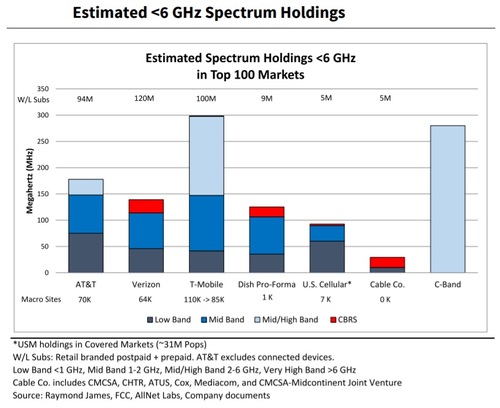 The C-band auction will release around 280MHz of midband spectrum between 3.7GHz and 4.2GHz. Click here for a larger version of this image.
(Source: Raymond James)

Nonetheless, some are beginning to wonder where all this money is going to come from. The analysts at Credit Suisse noted that AT&T, T-Mobile and Verizon will need to increase their aggregate debt load by a quarter, to $400 billion, to finance their expected purchases. That effort, the analysts wrote, "represents four years of the sector's after-dividends FCF [free cash flow], or about an eighth of the Big 3's combined equity market cap."

And, they added, C-band auction winners will need to get that cash quickly. The analysts explained that winners will need to make a 20% down payment to the FCC 10 days after the conclusion of the auction  probably in February or March  and pay the remaining 80% another 10 days later.

"We expect the winners will be looking to raise at least $50 billion of debt capital soon," the Credit Suisse analysts wrote. "Adding the debt and interest burden to our forecasts is complicated by accounting for assets not placed in service  interest expense will be capitalized through December 2021/2023 depending on the spectrum purchased, and the capitalization interest rates and tax treatment are not 100% clear to us at this time. In any case, we expect 2021 EPS [earnings per share] estimates are not at risk due to the auction (or could even benefit to the extent cash/bank lines are utilized), but 2022-2024 EPS, and all periods' FCF estimates, certainly are at risk."

Yet, according to the Credit Suisse analysts, all that spending might well be worth it.

"The extraordinary level of C-band spending puts in stark relief 1) the optimism that wireless managements have for new 5G revenue streams, 2) the constant tax wireless companies pay participating in spectrum auctions to maintain share and relative competitive positioning, and 3) the influence of the current environment's low cost of debt capital and low tax rate," they wrote.