Get ready for a big speed boost to 5G

While some of today's 5G networks are indeed faster than 4G, there's clearly plenty of room for improvement.

And, based on some new announcements from the likes of Qualcomm, Ericsson and Verizon this week, there are technological improvements heading to the market that could supercharge download speeds for some 5G users.

Carrier aggregation provides enormous speed boosts by essentially glueing together transmissions in different spectrum bands, including unlicensed spectrum bands. For example, Verizon first launched its 4G LTE service in a 10MHz chunk of its 700MHz spectrum almost a decade ago. Today, thanks to carrier aggregation, it can tie together 4G transmissions across roughly a dozen chunks of spectrum in its licensed 700MHz, AWS and PCS bands, as well as in unlicensed spectrum bands including 5GHz and 3.5GHz CBRS. Aggregating a new spectrum band into a connection is like adding a new lane to a freeway  more things can go faster.

And now, carrier aggregation is slowly but surely making its way into 5G. "It's one of several things that's going to emerge with 5G," promised Adam Koeppe, Verizon's SVP of technology planning.

Eight channel carrier aggregation
Verizon this week showed off 4.2 Gbit/s speeds on its 5G network thanks to carrier aggregation across eight 100MHz chunks of spectrum in its 28GHz licensed holdings. Although transmissions in millimeter wave (mmWave) spectrum can't go very far, they can carry enormous amounts of data. That's partly because mmWave spectrum is often allocated in 100MHz chunks  that's ten times bigger than the 10MHz chunks of spectrum typically allocated to the lower band spectrum that forms the basis of most of today's 4G networks.

Verizon purchased extensive mmWave spectrum holdings across the US via its acquisitions of Straight Path, XO Communications and Nextlink, and is using those licenses for its initial mmWave 5G network. The operator started in 5G last year with 400MHz of its 28GHz holdings, but in most locations it owns another 400MHz in 28GHz that is unused. It also owns substantial 39GHz holdings in a number of locations, sometimes up to 800MHz.

"The devices of the future as they evolve will incorporate both of those mmWave bands," Koeppe said of 28GHz and 39GHz. "If you look at the ability to aggregate those two types of bands, that's how you start to approach the 10 Gbit/s target."

Verizon CEO Hans Vestberg set a 10 Gbit/s speed goal for 5G more than a year ago, though Koeppe declined to speculate about when Verizon might reach it.

Verizon today promises average speeds of around 450 Mbit/s on its 5G mmWave network, with bursts up to 1 Gbit/s. But that's just using 400MHz of its 28GHz spectrum. With up to 800MHz in both 28GHz and 39GHz, Verizon can potentially aggregate up to 1600MHz of mmWave capacity in areas where it owns that much spectrum. And that doesn't even include spectrum from its 4G network that could be mashed into the connection as well.

"Eight channel carrier aggregation using mmWave will be widely available on the 5G network in 2020," Verizon stated in its release.

Koeppe explained that 10 Gbit/s on 5G would undoubtedly rely on a variety of technologies, including dynamic spectrum sharing (which allow operators to transmit 4G and 5G signals in the same spectrum band) and dual connectivity (which allows operators to maintain simultaneous 4G and 5G connections), as well as carrier aggregation.

Indeed, Qualcomm this week announced its new Snapdragon X60 5G chipset, and one of the main new features available on the 5-nanometer offering is support for carrier aggregation across most popular 5G bands and combinations, including mmWave and sub-6GHz using both frequency division duplex (FDD) and time division duplex (TDD) designs. This is part of the reason that Qualcomm said its new X60 can support 5G speeds up to 7.5 Gbit/s. 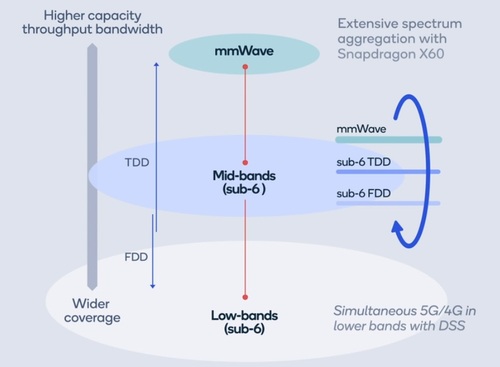 Qualcomm is positioning carrier aggregation across a wide variety of spectrum bands as a main highlight of its newest 5G chipset.
(Source: Qualcomm)

"Those three pieces of the equation  network infrastructure, chipset and device  they march in unison down the road of technical advancement," Verizon's Koeppe explained. "Those three things have to work together."

The development of technologies including dynamic spectrum sharing (DSS), carrier aggregation (CA) and dual connectivity (DC)  and chipsets that can support them  pave the way for aggregated connections across enormous swaths of spectrum, whether it's in 4G or 5G. The result could well boost today's 5G speeds by the same 10x or 20x factor that initial 4G LTE speeds have increased.

Juniper Networks Scalable IP Services Fabric for Wide Area Networks
Juniper Moves the Network Out of the Way, So You Can Focus on Customer Experience
Get Connected with Chris Lewis Podcast: Cloud-Native & Distributed Edge Architectures in SP Networks
The Open Evolutions of the 5G Network
Rakuten and Juniper Discuss the Management of O-RAN Platforms
More Blogs from DanoVision
A closer look at the 5G midband buildouts of T-Mobile, AT&T and Verizon