Fast-growing ZTE, free to buy US tech, is a nightmare for Biden

Being answerable to Xi Jinping has not stopped Huawei from protesting it is privately owned, with zero links to the Chinese state, in response to US sanctions. ZTE, the smaller of China's two 5G equipment makers, can table no such defense. Its latest annual report lays bare the grisly details of its parentage. Xi'an Microelectronics and Aerospace Guangyu, two of its main shareholders, are themselves government-owned. For any freedom-loving Westerner, ZTE has always looked dodgier and riskier than Huawei ever did.

Yet in a peculiar twist, it is Huawei that has become a seemingly permanent fixture on the US Entity List, the blacklist of companies to which US firms are prohibited from selling by the Bureau of Industry and Security (BIS), an adjunct to the US Department of Commerce. ZTE found itself on that list in 2018, when US authorities said it had failed to make amends for past misdemeanors, including the sale of US technology to Iran and North Korea. After paying a second $1 billion fine, it had its shackles removed a few months later.

Despite a worsening of relations between China and the US in the death throes of the Trump administration, ZTE remains unchained. Unlike Huawei, which can no longer buy essential components, ZTE's omission from the Entity List means it is apparently free to engage with US suppliers as well as chip foundries that rely on US technology, such as Taiwan's TSMC. 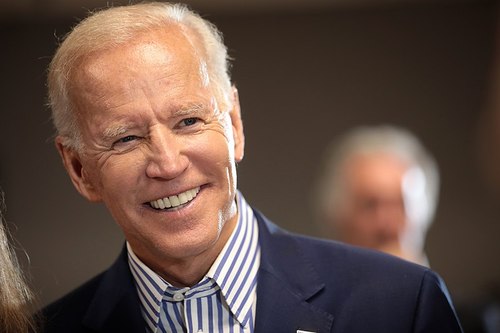 It is a prospective nightmare for Joe Biden, just three months into his job as America's 46th president. As a major supplier to China's mobile operators, ZTE, unlike Huawei, can still use American technology in the 5G products that may power China's economic growth. At home, Biden cannot afford the perception he is a softie. "On the Republican side, the knives are out," says Roslyn Layton, the co-founder of China Tech Threat, an advisory group owned by Strand Consult in Denmark. "They are ready for the midterms and will use every opportunity to say Biden is weak on China."

But reimposing sanctions on ZTE would arguably be his most aggressive anti-China move so far. Without evidence of new wrongdoing by ZTE, it would also be hard to justify. The Chinese vendor, after all, previously paid about $2 billion to be removed from the Entity List. Reinstating it on shady grounds of national security would be a very Trumpian move by a man keen to distance himself from his predecessor.

Sanctions nearly drove ZTE out of business in 2018 because of its heavy dependence on American technology. Freed from those constraints, it is now growing faster than Huawei, Ericsson, Nokia and Cisco. Overall revenues were up nearly 12% last year, to about 101.5 billion Chinese yuan (US$15.6 billion), and a breakdown of the figures shows increases at every business unit. The all-important carrier division, which sells network products to operators, recorded growth of 11.2%, to RMB74 billion ($11.4 billion).

ZTE's freedoms are not the sole explanation for its strong performance. It has far less exposure than Huawei does to international markets, generating 67% of its revenues in China. Countries that were turned off Huawei by the US campaign, including the UK, never had much time for ZTE in the first place. Back at home, China's decision to fast track its 5G rollout and install 700,000 basestations last year was a boon for ZTE as well as Huawei.

The difference between those vendors is that US sanctions have now forced Huawei into a strategic pivot. Unable to procure essential chips, and with analysts warning of imminent supply shortages, it says it will prioritize software and non-telecom activities henceforth. With no such concern, ZTE could conceivably supplant it in the future as the main provider of telecom hardware to China. 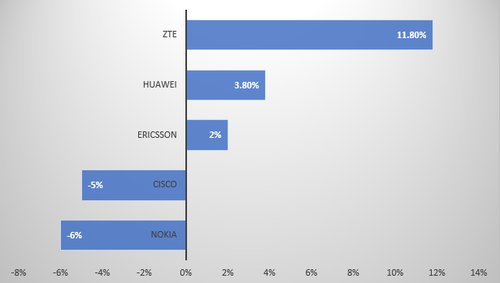 Source: Companies. Note: The last fiscal year ended in December 2020 for everyone bar Cisco, for which it was July 2020.

Component makers have evidently continued to supply ZTE. In the current absence of Chinese alternatives to US technology, its sales growth alone provides proof it has been able to resume relations with important American firms. Lumentum and Qorvo, two such companies, both named ZTE as a customer in last year's filings with the US Securities and Exchange Commission (SEC). Neophotonics, another US components maker, did the same in February.

"We sell to virtually all of the leading telecom network equipment companies such as Acacia Communications, ADVA, Ciena, Cisco Systems, Fiberhome, Fujitsu, Huawei, Infinera, NEC, Nokia and ZTE," said Neophotonics in its annual report. "Note that due to the BIS restrictions on Huawei, there was no shipment to Huawei in the fourth quarter of 2020."

Whatever Biden does, these relations might not have longevity. Scarred by their experiences under Trump, Chinese mandarins are determined to have full technology independence in the future. "They are trying to become self-sufficient in design and manufacturing," says Layton. "They are trying to use their own technology."

The plans could include repurposing equipment previously used to make light-emitting diodes, says Earl Lum, a semiconductor expert with EJL Wireless Research. "They have a lot of wafer fab equipment over there right now that can process technologies like gallium nitride," he says. "Those can be converted over to make RF [radiofrequency] amplifiers just by changing the process flow, because the equipment set is the same."

Huawei and ZTE are also doubling down. The former claims to have spent about RMB142 billion ($21.8 billion) on research and development last year, roughly 8% more than it invested in 2019. "We have a heavy investment in R&D," Victor Zhang, a vice president at Huawei, told Light Reading. "We are going to work on not having to rely on a single country or a single supplier."

As for ZTE, its latest annual report shows that spending rose 18% last year, to about RMB14.8 billion ($2.3 billion). It has been recruiting heavily for its research-and-development function, where staff numbers rose 12%, to 31,747 employees, in 2020. It was this increase and sharp growth in the cost of sales that caused net profit to fall 17%, to around RMB4.3 billion ($660 million).

Back on the blacklist

A move to blacklist ZTE once again is unlikely to meet a lot of political resistance in the US, according to Layton. "It is a really low bar for the Biden administration to put ZTE on it," she says. "It is already in the public's mind a problem and there is not a lot of business to lose in the US. It is not like so many American companies had ZTE equipment and are now out of pocket."

Indeed, while a number of US carriers in rural markets had turned to Huawei for network equipment, ZTE's US presence appears insignificant. Nor are there any clear examples of US firms that would be endangered if cut off from ZTE. A small number had counted on Huawei for a double-digit percentage contribution to their sales, but even Neophotonics, the most dependent, has diversified.

The final quarter of 2020 "marked an ongoing improvement in Neophotonics' customer and product mix diversification," said Fahad Najam, an analyst with MKM Partners, in a February research note. The components maker had previously owed nearly half its revenues to Huawei. In the recent fourth quarter, its top ten customers excluding Huawei accounted for 90% of sales, up from 54% a year earlier, said Najam. The company's share price has recovered, too. It sank to $3.89 in May 2019 on anxiety about sanctions. Last Friday, it closed at $11.29.

Even so, efforts to separate decisions about national security from the Department of Commerce might facilitate moves against ZTE and other Chinese players. "There is one camp that wants to make these decisions outside of the Commerce Department so they would not have to weigh national security against US corporate interests because they are not always aligned," says Layton. Republican Senator Tom Cotton, who has spoken out against reliance on Huawei and ZTE, thinks these changes would aid a decoupling from China, she points out.

Table 1: Marvell's net revenues based on destination of shipment ($ thousands)

The danger for Biden is that an entire Chinese ecosystem eventually takes shape in response to US sanctions, constraining the broader opportunity for American companies. Marvell, a US chipmaker, warned of the possibilities in a SEC filing last month. They include the risk that Chinese customers seek to replace Marvell or develop "indigenous solutions," it said. Last year, China was by far Marvell's biggest market for shipments, accounting for about 43% of its roughly $3 billion in sales.

ZTE has been flying under the radar ever since 2018 when US attention switched to Huawei. Even now, the industry mainly wants to know if Biden will maintain, tighten or drop the restrictions imposed on China's biggest equipment maker. The freedom enjoyed by ZTE, a company ultimately controlled by China's government, proves the incoherence of US policy. But if the Chinese firm continues to outpace all rivals on Biden's watch, it will be hard for him to ignore.